Hyderabad Encounter! Know Why There Are Difference Of Opinions Regarding The Action Taken By Police And How Our Judicial..

One Man Stood Against The Betrayal Of The East India Company To Save His Motherland! Know The Story Of..

Hyderabad Encounter! Know Why There..

One Man Stood Against The..

The Saga of Fight for Independence

“They ruled us for over 200 years, Freedom was not served on a platter for us, we paid its cost by our blood”

We, the people living in Independent India have only heard or read the stories how ancestors fought to liberate this holy land from the them. We read about them in our text books, watched them as the bad guys in popular culture representations, and we hear our politicians often name a few, ‘Freedom Fighters’ and share their anecdotes on their birth or death anniversary.

What more do we know? To be frank, nothing. In today’s time if we question most of our students to name at least 20 freedom fighters they will hardly be able to go beyond 10.

Let us know our history, let us know how the whole country came together for a cause, let us know the sacrifices, the struggle, the pain, the prosecution…

Let us first know, who were ‘they’, where did they come from? And what did they do! “One of the very first Indian words to enter the English language was the Hindustani slang for plunder: “loot”. According to the Oxford English Dictionary, this word was rarely heard outside the plains of north India until the late 18th century, when it suddenly became a common term across Britain. To understand how and why it took root and flourished in so distant a landscape, one need only visit Powis Castle.

The last hereditary Welsh prince, built Powis castle as a craggy fort in the 13th century, the estate was his reward for abandoning Wales to the rule of the English monarchy. But its most spectacular treasures date from a much later period of English conquest and appropriation: Powis is simply awash with loot from India, room after room of imperial plunder, extracted by the East India Company in the 18th century.

There are more artefacts stacked in this private house in the Welsh countryside than are on display at any one place in India – even the National Museum in Delhi. The riches include hookahs of burnished gold inlaid with empurpled ebony; superbly inscribed spinels and jewelled daggers, gleaming rubies the colour of pigeon’s blood and scatterings of lizard-green emeralds. There are talwars set with yellow topaz, ornaments of jade and ivory, silken hangings, statues of Hindu gods and coats of elephant armour.”

The British Joint Stock Company was founded by John Watts and George White in 1600 AD to pursue trade with South and South-East Asian Nations. This joint stock company, shares owned primarily by British merchants and aristocrats, the East India Company had no direct link to the British government.

In 1600, a group of London merchants led by Sir Thomas Smythe petitioned Queen Elizabeth I to grant them a royal charter to trade with the countries of the eastern hemisphere.

And so, the ‘Honourable Company of Merchants of London Trading with the East Indies’ – or East India Company, as it came to be known – was founded.

Few could have predicted the seismic shifts in the dynamics of global trade that would follow, nor that 258 years later, the company would pass control of a subcontinent to the British crown.

Between 1600 and 1874, it built the most powerful corporation the world had ever known, complete with its own army, its own territory, and a near-total hold on trade of a product now seen as quintessentially British: Tea.

At the dawn of the 17th century, the Indian subcontinent was known as the “East Indies,” and—as home to spices, fabrics, and luxury goods prized by wealthy Europeans—was seen as a land of seemingly endless potential. Due to their seafaring prowess, Spain and Portugal held a monopoly on trade in the Far East. But Britain wanted in, and when it seized the ships of the defeated Spanish Armada in 1588, it paved the way for the monarchy to become a serious naval power.

The British entered in Indian sub-continent at first as traders seeking spices. Spices were the primary way of preserving meat in Europe prior to the modern age. Then, having more modern and effective weapons, the sub-continent was brought into the Empire at gunpoint. As was commonly said: “The sun never sets on the British Empire.” It would have been more accurate to say: The British Empire consisted essentially of territories forcefully occupied and governed at gunpoint.

Hindusthan as referred by the Mughal, which was already under seize by these Invaders whom our text books glorify as ‘Great Mughals’ And the leftists who claims ‘Mughal made India Rich’ should also start writing ‘Mughal sold Hindusthan to the EIC’- The East India Company.

The British landed on Indian Subcontinent at the port of Surat, August 24, 1608 AD for the purpose of trade, but after 7 years British got Royal order (i.e. Farman) to establish a factory at Surat under the leadership of Sir Thomas Roe (Ambassador of James I).

The EIC relied on a “factory” system, leaving representatives it called “factors” behind to set up trading posts and allowing them to source and negotiate for goods. All Thanks to a treaty in 1613 with the Mughal emperor Jahangir, it established its first factory in Surat in western India. Over the years, the company shifted its attention from pepper and other spices to calico and silk fabric and eventually tea, and expanded into the Persian Gulf, China, and elsewhere in Asia.

The East India Company’s royal charter gave it the ability to “wage war,” and initially it used military force to protect itself and fight rival traders.

However, in 1757, it seized control of the entire Mughal state of Bengal. Robert Clive, who led the company’s 3,000-person army, defeated the forces of the Nawab of Bengal, Siraj-ud-daulah, at the Battle of Plassey, became Bengal’s governor and began collecting taxes and customs, which were then used to purchase Indian goods and export them to England.

The company then built on its victory and drove the French and Dutch out of the Indian subcontinent.

In the years that followed, the East India company forcibly annexed other regions of the subcontinent and forged alliances with rulers of territory they could not conquer. At its height, it had an army of 260,000 (twice the size of Britain’s standing army) and was responsible for almost half of Britain’s trade. The subcontinent was now under the rule of the East India Company’s shareholders, who elected “merchant-statesmen” each year to dictate policy within its territory.

But financial woes and a widespread awareness of the company’s abuses of power eventually led Britain to seek direct control of the East India Company. 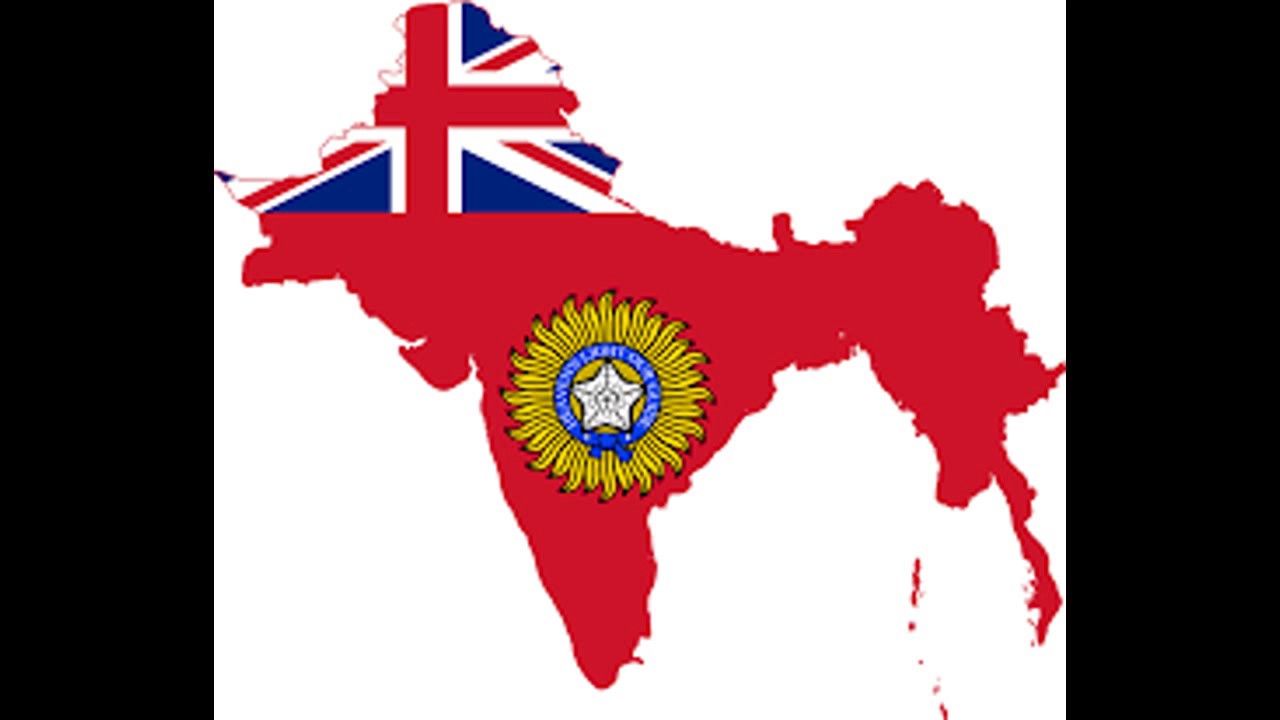 This system of governance was instituted on 28 June 1858, when, after the Indian Rebellion of 1857, the rule of the British East India Company was transferred to the Crown in the person of Queen Victoria (who, in 1876, was proclaimed Empress of India). It lasted until 1947, when it was partitioned into two sovereign dominion states: the Dominion of India (later the Republic of India) and the Dominion of Pakistan (later the Islamic Republic of Pakistan, the eastern part of which, still later, became the People’s Republic of Bangladesh).

At the inception of the Raj in 1858, Lower Burma was already a part of British India; Upper Burma was added in 1886, and the resulting union, Burma (Myanmar), was administered as an autonomous province until 1937, when it became a separate British colony, gaining its own independence in 1948.

India during the British Raj was made up of two types of territory: British India and the Native States (or Princely States).

In its Interpretation Act 1889, the British Parliament adopted the following definitions in Section 18: (4.) “The expression “British India” shall mean all territories and places within Her Majesty’s dominions which are for the time being governed by Her Majesty through the Governor-General of India or through any governor or other officer subordinates to the Governor-General of India.

Johann Hari of The Independent writes,

“We are still a nation locked in denial. If you point out basic facts about the British Empire – that the British deliberately adopted policies that caused as many as 29 million Indians to starve to death in the late 19th century, say – you smack into a wall of incomprehension and rage.

The historian Niall Ferguson called me “Hari the horrible” for writing about this in my column last week. Another neo-imperialist historian, Lawrence James, accuses me in The Sunday Times of being a “twerp” who writes “twaddle”. The Daily Mail says I should check my facts.

I have. Many times. And the truth is still there, no matter how much sound and fury is vomited at it. If you check the claims of the defenders of Empire against the historical record, it becomes clear there is a howling gap between them”.

They came, they looted, Plundered, Captured, Divided, Descriminated us.as there atrocities began to cross the threshold, the country rose to fight against them.

In next chapters let us explore resistance and struggle by the Indians against the Company and the British Rule, let us know more about the fighters who paid the price for freedom with their blood. How Israel helped India win the Kargil War? It came to India’s rescue when other global powers supported Pakistan