Hilarious! Muslim youth filed a case against the latest internet sensation Priya Prakash Varrier! Do you know why?

An Indian Army officer’s anecdote about secularism is going viral on social media for all the good reasons. Want to know why? Read on to know what he had to say…

Colonel Saurabh Singh Shekhawat, India’s most decorated officer, says that everyone in the army lives as a “pluralistic secular society” and “act like a unit” irrespective of their caste and religion in the one-minute video. 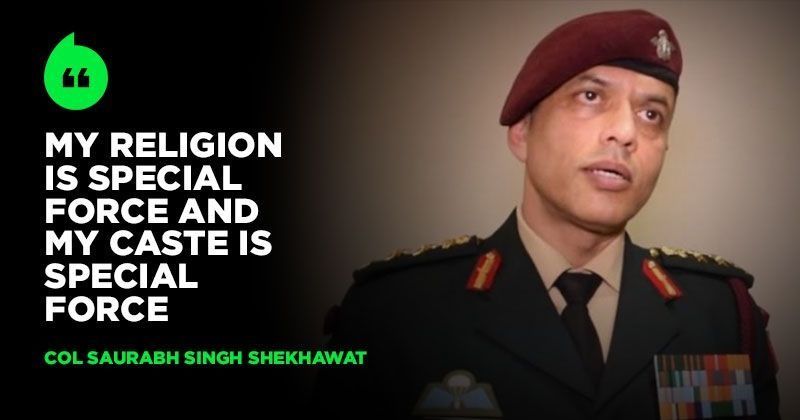 On Tuesday, AIMIM chief Asaduddin Owaisi gave a shameful communal spin to the martyrdom in the dastardly Pak-sponsored Sunjuwan terror attack. While delivering a news conference on the attack, he said the following:

Perhaps the aptest rebuttal to this manner of communal politicization, an affirmation a soldier has no religion, came a week or so earlier from none other than one of India’s most decorated serving officers, Col Saurabh Singh “When I was commissioned and when I joined special forces (SF), I was asked what is your religion and what is your caste. I said I am a Hindu Rajput. He said ‘Bloody chap, go and take a dip in dirty water.’ I went and took a dip and I realized I had said something wrong. He asked me again and then I said that my religion is SF and my caste is SF, and he said, ‘Now you know.’”

Inspiring, isn’t it? What Col Shekhawat is saying is what Indian Army teaches. This is what we all have learnt. This is what we believe in. It does not matter what a religious text of any religion says. Army is inclusive. As an officer, your religion is the religion of your troops. Great words sir.

“If you apply this kind of template in the country, most of the problems will be solved … All the religions are there, all the classes and clans are together and still they are one unit,” he adds.

If you had to listen to one man today. #OneTalkToday
Who – Col SS Shekhawat, CO 21 Special Forces, the most decorated serving officer.

Politicos please learn something from this patriotic Colonel of Special Forces. This is the ethos of the army. Stop being petty. Nation first always and everytime.

We are very proud of our Army..Most professional and Full of capabilities.. God bless you always.
Hope soon our Army takes over atleast for 4-5 years, So all dairty politicians runaway to rabbit holes and our constitution saved.@MrsGandhi @ShefVaidya @AditiIndiaFirst

The tweet was shared 4,533 times and was liked by more than 7,000 people on social media. Many praised and supported Col Shekhawat’s views on “pluralistic secularist society” on social media.

“What Col Shekhawat is saying is what Indian Army teaches. This is what we all learnt. This is what we believe in. It does not matter what a religious text of any religion says. Army is inclusive. As an officer, your religion is the religion of your troops,” defence analyst Major Gaurav Arya commented on the post.

A part of the Indian Army’s elite Special Forces, Shekhawat has three gallantry awards to his name -Kirti Chakra, Shaurya Chakra and Sena Medal and a Vishisht Sena Medal for his distinguished service.

Hilarious! Muslim youth filed a case against the latest internet sensation Priya Prakash Varrier! Do you know why? Why Gandhi opted for Nehru and not Sardar Patel for PM ?