Indian Economy would have collapsed..

After the British and the Mughuls, perhaps Hindus were and are the most suppressed in the communist ruled Kerala. But we all know the saying that the revolt will be most powerful where the suppression is the maximum.

After one another activists who belonged to other faith made an attempt to enter the Sabarimala temple. But the united Hindus showed their real power. From Rehana to Mary and now Trupti Desai, all the Hindu haters who hid themselves under the mask of activists were not allowed to enter the Sabarimala temple. This has further angered the Hindu hating brigade.

Trupti Desai was not even allowed to step outside the Kochi airport, forget entering the inner sanctum of Sabarimala temple. That’s why finally even the Kerala police were left with no other option than asking her to leave Kerala and return back from where she had come.

Embarrassed by this, Trupti Desai mildly abused the Ayyappa Bhakts and even went on to the extent of giving a hilarious statement saying she will be back with guerrilla tactics.

Yes, after the flop show in Kerala, she said “I am sad to say that these protesters who call themselves Ayyappa devotees resorted to abuses and threats, they cannot be real Ayyappa devotees. The protests could have been held at Pamba or Nilakkal but they chose to protest at Kochi airport itself. This shows that the protesters are scared of us and we have managed to scare them just from Kochi airport”. 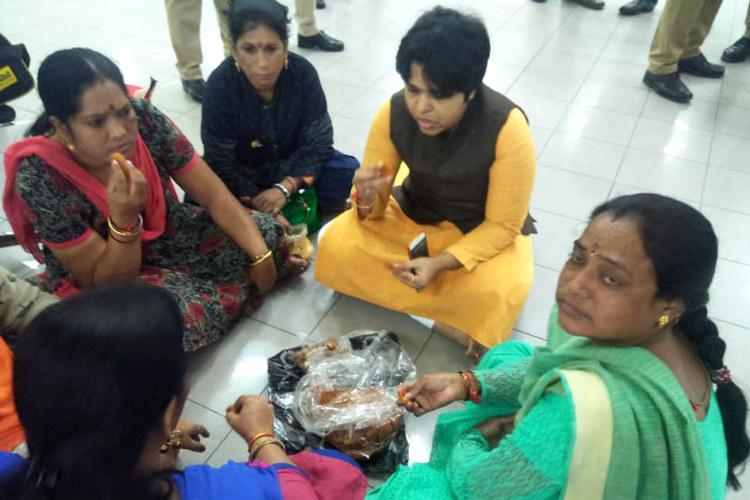 She even tried to portray herself as victorious by saying “By protesting at airport, they’ve proved that they’re afraid of Trupti Desai and team. This is our victory”. This was indeed funny.

By observing her statements, one can easily say that it was filled with flips and “flops”. Earlier she had said “The police tried to evacuate us from another gate but the protesters were there as well. Does this mean protesters are scared that we’ll reach Sabarimala once we reach Nilakkal or are they trying to scare us? We will not return until we offer prayers at Sabarimala”. But within hours, the united Hindus forced her to return, without even sniffing success.

Presently even a complaint has been filed against Trupti Desai and six others for attempting to visit the Sabarimala temple.