This news is no surprise as the terrorists groups in India have become very active and are plotting big plans to attack India. But what is scary is, the terrorists groups are recruiting people within India for the attack and they have been successful in convincing many Muslim youths to sacrifice their life in the name of Jihad.

Ghazwa-e-Hind refers to a final apocalyptic war in which India will be conquered by the jihadi army. According to this doctrine, the people who die in the Jihadi battle will be granted permanent place in heaven. The intelligence agencies have identified many terror launch pads which are able to train young recruits and involve themselves in jihadi activities. West Asia is being used by terror agencies to set new launch pads. 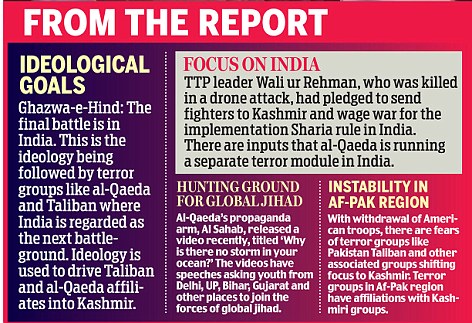 Reports suggest that many groups were created by Arab fighters and now they are involving Kashmiri youths to join activities.

The Al-Qaeda is using local Islamic groups to spread their ideology and later attract them into terror activities.  An online English publication of al-Qaeda called Azan which is not available to the general public but is circulated through changing e-mails and encryption tools is being downloaded by Kashmiri groups said the intelligence reports.

The main aim of the terror agencies is to set up minor and isolated modules in the country which are potent enough to conduct big attacks. The big worry of these isolated terror modules is that they are extremely difficult to be recognised. Groups like Tehreek-e-Taliban have already opened offices in Kashmir and young men are being attracted by money and women. Talian Flags are being hoisted in many parts of Kashmir and the walls have slogans like “Welcome Taliban.” “Indicators need to be monitored to prevent the situation from worsening,” said one official.

Another group called Al Sahab, is also actively recruiting youngsters and also released a video recently, titled ‘Why is there no storm in your ocean?’ provoking people to join the Jihad war and convert the land of Hindustan into Islamic land. They have addressed people of Delhi, Uttar Pradesh, Bihar, Gujarat and South India to join the global jihad.
After the Indian Mujahideen (IM) leader Yasin Bhatkal was arrested, the organisation took a massive blow and the IM almost reached a point of decimation. So the home grown terrorists are now lining their terror activities with ISIS and Al Qaeda to get financial support and expand their organisation. Al Qaeda is said to have started a new separate terror module in India to encourage local Muslims to join the terror outfits.

Clearly, the IM and many home grown terrorists are now joining hands with global terror network which has made India vulnerable to global terror agencies like Taliban and ISIS.
The intelligence reports suggested that India must take the issue seriously before the situation goes out of control and rein in the terror modules and activities in the country.