Led by a tough move, North Korea says it will stop nuclear tests and abolish test site!!! Here’s what..

Great move for Soldiers at Siachen, Construction of oxygen-generation plant to help the soldiers breathe easy not by any..

Great move for Soldiers at..

The one clear message from the International Monetary Fund to policymakers congregating for the fund’s annual meeting this week in Washington, D.C. is this: Use the current period of global economic growth to build buffers for the numerous risks they see building on the horizon.

The list of risks is long, but one of the biggest is the surge in global public and private debt, which sits now at 225% of global gross domestic product, to a new record of $164 trillion as of 2016, the IMF’s most recent data. The last peak occurred in 2009.

Global public and private debt swelled to 225 percent of global gross domestic product in 2016, the last year for which the IMF provided figures, the fund said in its semi-annual Washington, D.C.report. The previous peak was in 2009, according to the Washington-based fund.

“One hundred and sixty-four trillion is a huge number,” Vitor Gaspar, head of the IMF’s fiscal affairs department, said in an interview. “When we talk about the risks looming on the horizon, one of the risks has to do with the high level of public and private debt.”

The global debt burden clouded the IMF’s otherwise upbeat outlook of the world economy, which is in its strongest upswing since 2011. The fund forecast expansion of 3.9% in 2018 and 2019, while saying in subsequent years the global economy could be impacted by tighter monetary policy and the fading effects of U.S. fiscal stimulus. Surging private-sector debt, particularly in China, is driving the build-up. China has accounted for almost three-quarters of the increase in private debt since the global financial crisis, according to the fund. 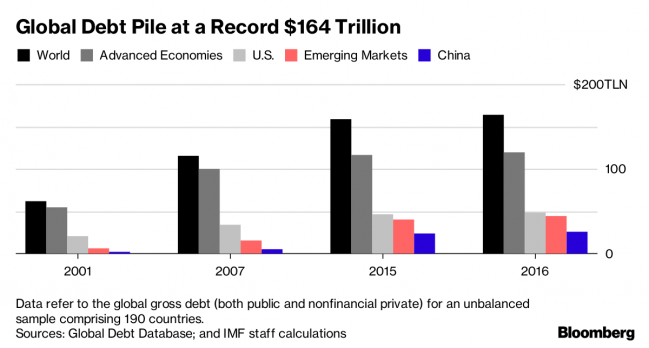 The IMF figures lay bare the scale of the debt hangover from which the world is still recovering a decade after the financial crisis pushed the global banking system to the brink and tipped the world economy into recession. Governments increased spending to boost growth, while central banks resorted to unconventional methods to ease financing conditions, such as buying bonds. 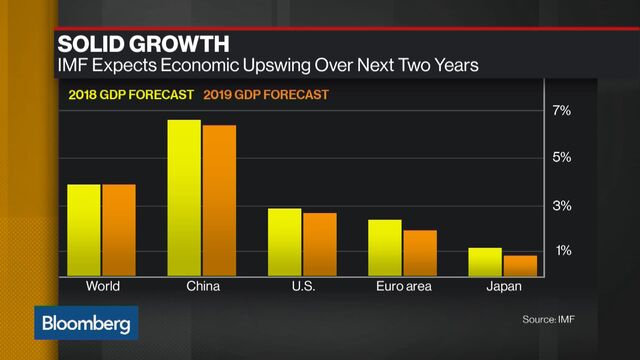 High levels of sovereign debt could make it difficult for governments to refinance when their debt reaches maturity, especially if financing conditions tighten, the IMF said. Large debts also impede the ability of nations to increase spending if their economies fall into recession, and may cause a drag on growth, according to the fund.

The combination of last year’s tax cuts and increased government spending in a recent U.S. budget deal will benefit all income groups, the IMF said. However, those in the top quintile of incomes would benefit the most, followed by those in the bottom quintile, the fund said. As a result, the measures may contribute to the further “hollowing out” of middle-class incomes, it said.

Many governments have troubling debt-to-GDP levels, according to the fund. More than one-third of advanced economies had debt-to-GDP levels above 85 percent, three times more nations than in 2000, the IMF said. Among major economies, Japan had the highest debt-to-GDP level last year, at 236 percent, followed by Italy at 132 percent and the U.S. at 108 percent.

Meanwhile, a fifth of emerging markets and middle-income countries had debt levels above 70% of GDP, led by Brazil at 84 percent and India at 70.2 percent. Gross government debt in China stood at 47.8 percent last year, according to the IMF.

100 crore Hindus will love CM Yogi after listening to what he replied to a reporter who asked, "You celebrated Deepawali in Ayodhya and Holi in Braj-Vrindavan! Where you're going to celebrate Eid? Instead of books,12 pistols, jihad magazines, bombs found in this man’s house, check who he is! Can you believe this? Now, India has the maximum “Women Pilots” in the World!