After the conspiracy to kill PM Modi got exposed, cops reveal that another BJP Chief Minister’s life is in..

After getting stunned with Pranab..

After the conspiracy to kill..

After the revelation made by sensational maoist letters that there is a plan to assassinate Prime Minister Modi in the same way as Rajeev Gandhi by targeting him during one of his roadshows and also how concrete steps are being followed by the anti nationals to end Modi-Raj another stunning outbreak has shocked everyone.

Now an intel note from the year 2017 has emerged which mentions not only PM Modi but seven other Indian leaders among him are on the radar as targets. It has been revealed from the note that the mastermind behind this plan of killing Indian leaders is the Pakistan agency Inter-Services Intelligence (ISI).

The others leaders which are also on target along with PM Narendra Modi are Arun Jaitley, Sushma Swaraj, Amit Shah, Yogi Adityanath, Manohar Parrikar, Rajnath Singh and Venkaiah Naidu

According to Republic World sources, The secret note dated January 2018  has revealed October 2019 plot as per which Pakistan’s rogue body ISI hired Masood Azhar’s brother to carry out the plot. The note says that an 11-membered suicide squad led by Masood Azhar’s distant cousin brother was trying to assassinate top Indian political leaders.

According to the letter On 27 October 2017 eleven member suicide squad of Pakistan ISI led by Khalid Azar, distant cousin brother of Mashood Azhar Chief Jaish-E-Mohammad (JeM) reached at Mahesh Khali coast of Chittagong port from Karachi Port. Presently this squad is being sheltered at Hath Hazari Madrassa Chittagong (Jamaatram). The instructions were to infiltrate these cadres to India between 15th -20th November 2017 the Indian State at the behest of its ISI masters. 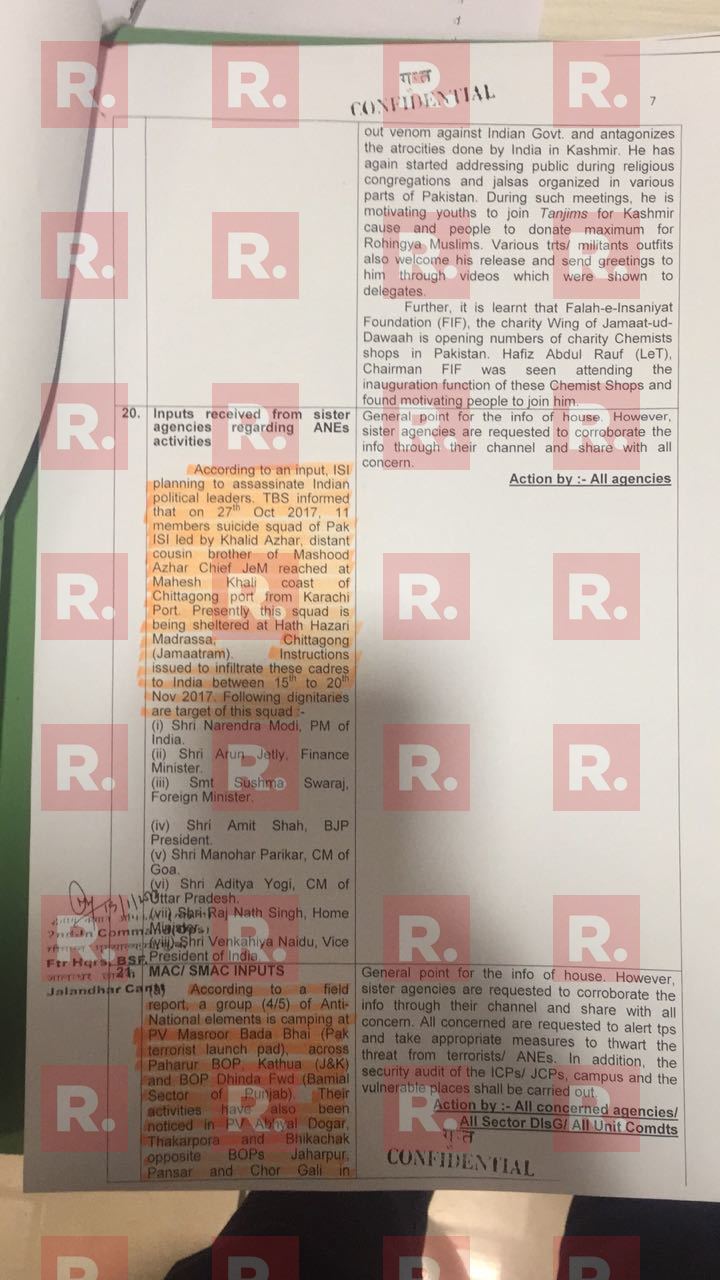 Jaish-e-Muhammad’s primary motive is to separate Kashmir from India and merge it into Pakistan. It has carried out several attacks primarily in Jammu and Kashmir. The group maintained close relations with the Taliban and Al Qaeda and continues to be allied to them.

Even from the letters and notes revealed today it is quite clear that PM Modi Government has become a roadblock in life of these all anti-national elements as PM Modi has put an halt to all the illegal activities they were carrying out for destroying the nation and gave them sleepless nights. That’s why all these anti-national forces always keep on attacking PM Modi and his Government and keep spreading fake propagandas to deviate the minds of the people. JeM had already allegedly carried out a sting of deadly attacks against Indian targets, including the attack on the Indian Parliament in December 2001 and at Pathankot airbase in 2016.

Seeing nothing happening with all there fake lies and propagandas bursted and PM Modi’s advancing the nation, is irking in the eye of anti-nationalists and now they have stooped such low that they are hitching the plans to kill PM Modi, joining hands with the Congress. There should be thorough investigation on all these accessed letters and notes and all those involved should be immediately nabbed and punished. Another feather on PM Modi’s crown! Palestine confer PM Modi with “Grand Collar of the State of Palestine” Here’s the man who single-handedly increased the seat share of BJP in the last 10 days of the Karnataka elections!