The Politician who claimed to abolish Hinduism is now in the favour of JDS Party in Karnataka!!!This Hyderabad MP..

The Politician who claimed to..

Recently there has been various reports on vandalizing statues of National icons like Dr Ambedkar, Syama Prasad Mukherjee and Gandhi in various parts of the country. These incidents picked up pace after the Lenin statue was brought down in Tripura by few BJP people after the fall of Communist rule. Lenin who was known for his brutal acts, genocide and murders is regarded as role model for the left wing and communist protested against the demolition of Lenin statue and in turn started attacking the statues of National leaders.

Just few days after the incident, there were reports from Uttar Pradesh where Dr Ambedkar statue was vandalized by miscreants. The Yogi government immediately ordered probe after which few people were arrested under section 295 A (deliberate and malicious acts intending to outrage religious feelings of any class) and 427 (mischief causing damage). But it was noted that these people were being paid to vandalize the statues of Ambedkar and other National leaders with an intention to create communal hatred and malign the BJP government as anti Dalit. Similar incidents were also reported from Tamil Nadu where Dr Ambedkar’s statue was vandalized. The preliminary investigations showed that this was a deliberate and orchestrated act by few political parties which tried to score political brownie points blaming the BJP.

The BJP MP of Uttar Pradesh Ballia Bharat Singh who was addressing the crowd during Dr Ambedkar’s birth anniversary yesterday, made a scathing attack reveling that Christian Missionaries were behind vandalizing Ambedkar’s statues in Uttar Pradesh. Speaking to reporters, he claimed that “It is at the behest of the Christian missionaries that the statues of Babasaheb Ambedkar are being damaged and vandalised. The missionaries are also financing the people who are indulging in damaging and vandalising the statues of Babasaheb.”

He said that it was deliberate attempt to target the BJP government which was getting popular among the dalits and the backward classes recently. Last year during the UP elections, it was the dalits and the backward classes who voted in large numbers to BJP which helped them gain over 300 seats in the state. This was definitely seen as a threat to the Congress and so called secular parties who had previously used dalits as their vote banks. But the sudden shift of Dalits and OBCs towards BJP has caused a great worry to the opposition and are desperate to create negative perception against BJP as Anti Dalit.

It can be well observed that during the Jallikattu protest in Tamil Nadu, the entire agitation was peaceful for few days until the so called secular parties jumped in. Later the entire students agitation was hijacked by the communists after which the fight was not against the judicial ban but against the BJP and PM Modi. Posters of LTTE terrorists Prabhakaran, anti India slogans and Islamic flags were raised during the protest. The entire episode was planned in a such a way that the Modi government is projected anti Tamil Nadu, anti Dalit. It was later found that these violent mobs and goons were funded by Christian Missionaries to create tension among community and spew the venom of Anti Nationalism. 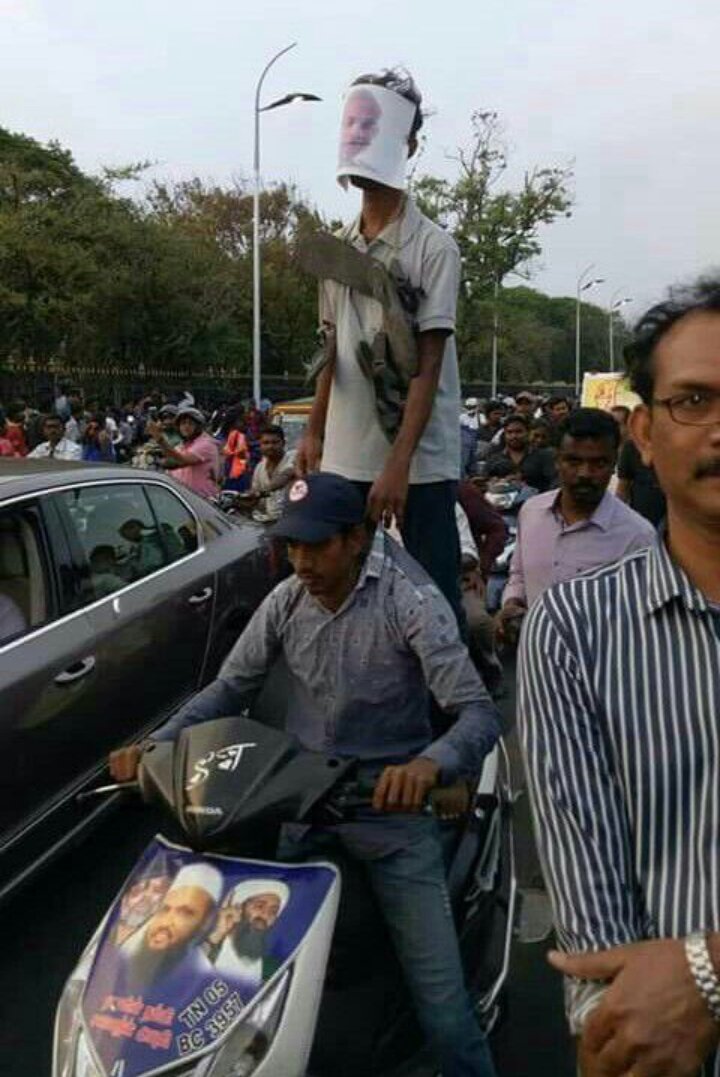 The same Modus Operandi is being followed now in many parts of India in the name of dalits. A well planned drama is being propped up to divide the Nation by the same groups which mostly funds anti National activities in our own country. So, it is definitely not a random act of miscreants but an orchestrated episode by political parties and foreign funded agencies to disrupt the country in the name of communal war.

Henceforth, the statement made by MP Bharat Singh cannot be ignored since this sort of attack on secular fabric of the country is not new.