Prannoy Roy’s residence has been raided by CBI officials in New Delhi. He is the co-founder of NDTV along with his wife, Radhika Roy. The raids were conducted in the morning today.

#FLASH CBI registers a case against Prannoy Roy, Radhika Roy, a private company and others for causing an alleged loss to Bank.

The news was doing the rounds since early morning, but now it has been confirmed by authentic news agencies. NDTV was founded in 1988. It is seen as a face-saving channel of separatists and terrorists in India. Some of India’s most disgraceful journalists come from this channel.

Barkha Dutt and Rajdeep Sardesai are a contribution of this channel. They carried out a malicious campaign against Narendra Modi and tried to malign his popular and clean image.

Barkha Dutt, who is not part of the channel anymore, was openly seen supporting the terrorists’ point of view. She described slain Hizbul Mujahideen commander as the “son of a poor headmaster.” The Channel was said to be in very good terms with the Sonia Gandhi led UPA government from 2004-14.

The Channel continued to target Narendra Modi even after he became the Prime Minister. Prannoy Roy also faced charges of Tax Evasions, ownership issues using shell companies. The Hindi Channel of NDTV was even criticized for its Pathankot coverage last year.

The raids began at 7:30 am today. CBI officials have been quizzing Prannoy Roy & Radhika Roy.

Fear of law is necessary and it should be applied no matter who you are: BJP MP Subramanian Swamy on CBI raids at Prannoy Roy's locations pic.twitter.com/gdN4FUq32O

Radhika Roy & Prannoy Roy are the main stakeholders of NDTV. Financial deals of NDTV are under the scanner. The raids have been conducted at 4 places in Delhi & Dehradun. The official statement of the CBI confirms that Roy & his wife, caused loss to a Private bank. The raids are currently on.

A 2010 Sunday Guardian report said that Prannoy Roy & his wife, who have a majority stake at NDTV, indulged in financial misdemeanors and malpractices in connivance with the ICICI bank, and raised funds by misdeclaration of the value of shares in NDTV.The deal took place between July and October 2008 during a “buyback” of shares from the stock market announced by NDTV Limited at the price of Rs 439 per share. Share prices were in a period of boom at the time, and the company expected prices to rise even further. This is why it wanted to buy the shares back. Since the company did not have sufficient liquid funds to finance this purchase of shares, it took a loan from India Bulls Financial Services of Rs 363 crores, pledging 90,70,297 NDTV shares. This was in July 2008.

The collateral of the India Bulls loan, therefore, depreciated, compelling India Bulls to recall the loan. NDTV did not have the money to do so. They approached ICICI Bank to lend them money. ICICI gave a loan of Rs 375 crores in October 2008 against the collateral of 47,41,721 shares held by RRPR, at an average price of Rs 439, representing a gross value of Rs 208 cr.

This was the first financial malfeasance, since the worth of the collateral was far less than the amount given. This was further compounded by what can only be described as financial chicanery, since the price of the shares given as collateral was not Rs 439 but was actually Rs 99 in the market, as of 23 October 2008. The gross value of the collateral was only Rs 46.94 crores, or one-eighth of the loan given. ICICI, a publicly traded company in which the government and its institutions have a substantial stake, therefore accepted a lie purveyed by Prannoy Roy and Radhika Roy, the only two shareholders in RRPR. It is also important to note that RRPR did not own a single NDTV share before July 2008, authorised and subscribed capital of a mere Rs 1 lakh.

Shockingly, just days after the disbursal of the monies, one of the directors of RRPR Holding [there were only two directors, the husband-wife team of Roys], was granted an interest-free loan of Rs 73.91 crores from the funds that had suddenly come into this inert company through the ICICI loan. The ICICI loan was an open violation of the SARFAESI Act of 2002.

The Ministry of Corporate Affairs, who received the necessary intimations of all transactions, gave implicit acquiescence of the transaction by choosing to remain silent. RBI, which had also received this information, also kept quiet.

To put this malfeasance in context, last month CBI arrested eight senior managers of LIC and other banks for a loan scam amounting to Rs 2000 crores in multiple transactions. NDTV has been a frequent borrower abroad, and also selling stakes in subsidiaries abroad and repurchasing these shares through various interested parties at prices that have no relationship to actual market values. For instance, NDTV Imagine [now sold] shares representing a face value of Rs 10, were sold at Rs 776. The benefit of such high premium obtained by these shares has not reached the Indian investors in the company. NDTV shares, on the other hand, are slipping even further, and losses rising. Its business overseas is through subsidiaries, which conduct financial dealings through accommodation addresses; one is 90 High Holborn, London. 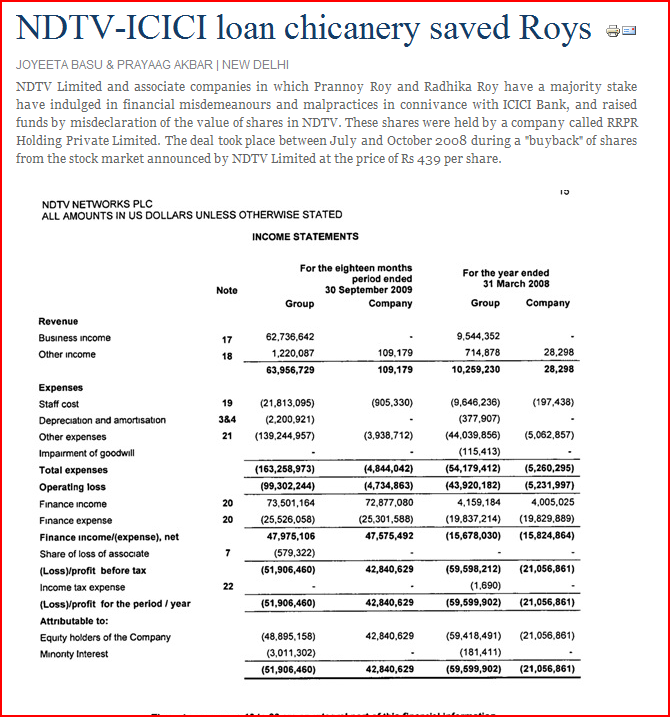 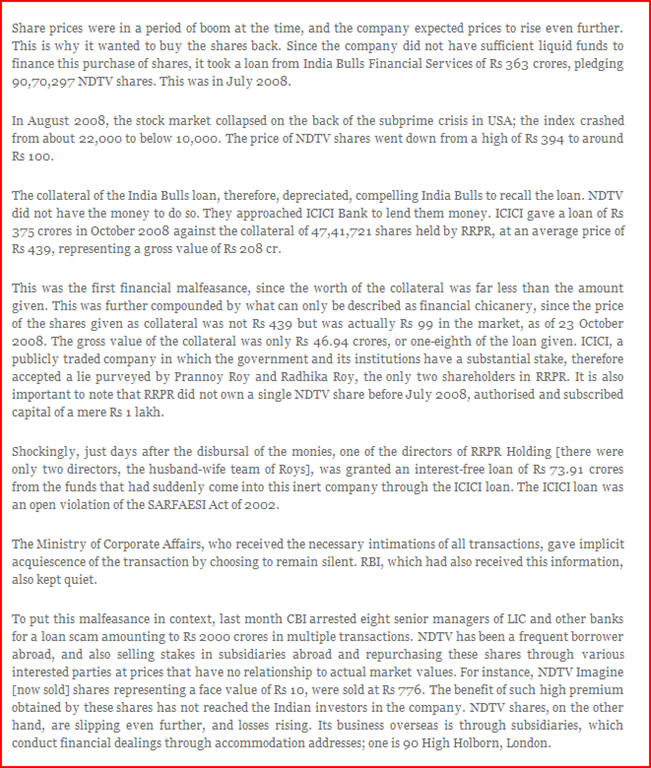