Game Over for Congress!!! What you read below will blow your mind off…Congress is left with no more justifications..

This Rajya Sabha MP is a Pakistani citizen and was a member of SIMI terror group, know who made..

Game Over for Congress!!! What..

This Rajya Sabha MP is..

In a big development, the Congress plan to sabotage the Ram Mandhir case has been exposed. Just weeks before the Ayodhya case is all set to be sorted out, the Congress makes desperate move to stop the Ayodhya verdict. In a secret plan, the Congress has started collecting signature campaign among all parties asking them to support the impeachment motion against the sitting Chief Justice of India Deepak Misra.

The plan to impeach the sitting judge first started when 4 judges of the Supreme Court went to media claiming that they were not happy with the functioning of the Supreme Court. Though the entire issue initially looked genuine, it was later found that the entire episode of Supreme Judges speaking against CJI was a plot to impeach CJI Misra who is heading the Ayodhya bench.

Among the four judges, Justice Chelmeshwar had even met leaders of the left party just after the press meet which raised many speculations and the real intentions of the judges.

Most audacious 'conspiracy' ever as the Lobby plots to cripple judiciary. More details by @RShivshankar in conversation with @navikakumar #LobbyVersusCJI pic.twitter.com/ccTEIklqYV

Kapil Sibal who represented the AIMPLB had argued to delay the Ayodhya case until the 2019 elections which showed that the Congress doesn’t want the Ayodhya verdict before the general elections. When nothing worked, they have started this conspiracy to impeach the sitting Chief Justice of India to fulfill their political deeds and cripple the judiciary.  This move is been supported by NCP and left parties, RJD and DMK which are supporting Congress to stop the Ayodhya verdict.

But the worst part is the NCP leader admitted that they have no idea why the impeachment motion was initiated and said the Congress asked them to sign and they did.  However, the BJD has strongly opposed the move and blasted the Congress for trying to delay the Ayodhya verdict. 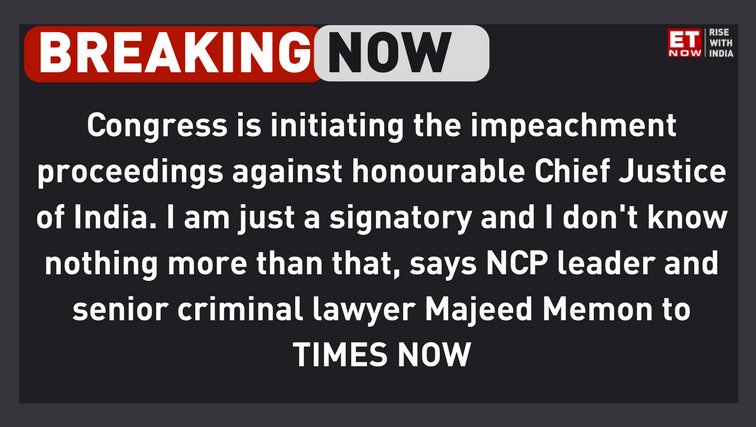 Massive outrage has erupted in the social media following the Congress move. It is clearly a pressure tactic on CJI to adjourn the Ayodhya case to 2019 in order to reap benefits in the elections. The Ayodhya verdict pronounced now and if it goes in favour of the Hindus, will benefit hugely for BJP which was an election promise in their manifesto. The Congress is trying to prevent this from happening and want the Ayodhya case to be hung forever.

Rahul Gandhi who called himself a janeu dhari Hindu and is touring Temples in all poll bound states should first come and make his stand clear about the Ayodhya issue. If he really is a Hindu supporter, then why is he trying to sabotage the case and trying to score political points out of it? When it is very clear that Ayodhya belongs to Hindus and is the birth place of Lord Ram, why is he going against the Ram Temple construction?

This only shows the real face of Congress which is anti-Hindu and the soft Hindutva approach is nothing but a gimmick played by the Congress to fool Hindus in the country. The continuous electoral loss has only forced them to pick up soft Hindutva approach to gain votes of Hindus and their true colours will be out if they any chance win elections. Within no time they will be back to calling Hindus, Saffron Terror, extremists and dangerous than Islamic terror and jail people like Col Purohit who had exposed the Congress terror link.

The Congress will face massive backlash if they move the impeachment motion to stop the Ayodhya verdict which will enrage the Hindus who have been waiting for the temple for nearly 28 years.

Check how people are outraged with the Congress bizarre decision!

Congress Party will do anything to stop the Ram Temple in Ayodhya, from serving as lawyers against it to impeaching chief justices that might favor it. Rahul and company may visit temples but stab Hindus in the back on Ayodhya's most important Hindu temple.
#AyodhyaImpeachment

The sheer brazenness of the Congress is stupefying. No individual or institution in the country is safe from them. The Nehru Dynasty and its courtiers will go to any extent to destroy anybody and any institution to achieve their cynical ends. #AyodhyaImpeachment https://t.co/vTeS5OFzI5

Last attempt to derail #AyodhyaVerdict. Desparation of @RahulGandhi is beyond measue. But this impeachement motion will be big trouble for congress. @BJP4India @AmitShah should use this oppoptunity to project congress anti national party! #AyodhyaImpeachment

#ayodhyaimpeachment Congress clearly has lost its moral compass since long. This move makes them almost alien to this land. Guess time to make move to impeach them all and ban them from the scene of any political activity.

#AyodhyaImpeachment what audacity this @INCIndia. Whatever u and ur gang tries, Rama Temple will be built there. period.

#AyodhyaImpeachment
Will be suicidal for opposition parties. It will backfire with lot of pains.With this move the whole opposition alienated from Hindu voters.
The intention is appeasement. It is quite evident. Let us unite to save our country and the Santana dharma.

#AyodhyaImpeachment on the one hand Rahul shamelessly visiting all temples for votes &on other hand they are destroying Hinduism. Hypocrite