Mohammad Farooq alias Farooq Shaikh, one of the city’s biggest hawala operators, was arrested by the Enforcement Directorate (ED) on Tuesday in a Rs 2,253 Crore money laundering case involving his Stelkon Infratel Pvt Ltd. Stelkon was part of Farooq’s network of 160 shell companies and was run from a one-room office in Zaveri Bazaar.

Farooq was on the radar of various probe agencies since 2014 and is believed to be associated with underworld elements, said officials. The Directorate of Revenue Intelligence had investigated the case of inflated remittances abroad and submitted a report to the ED in 2016 for action under the Prevention of Money Laundering Act. Last May, the CBI registered a case as it suspected the role of bank officials in the scam. Subsequently, ED too registered a money laundering case against the same set of the accused.

Big Achievement: Mohammad Farooq is arrested by ED in a Rs 2,253 Crore money laundering case. He is one of the biggest hawala operators in Mumbai. Farooq’s hawala empire has over 160 companies created on fictitious addresses with dummy directors like autorickshaw drivers.

Big Achievement: Mohammad Farooq is arrested by ED in a Rs 2,253 Crore money laundering case. He is one of the biggest hawala operators in Mumbai. Farooq’s hawala empire has over 160 companies created on fictitious addresses with dummy directors like autorickshaw drivers.

Item of interest was any money recovered from him? He should be handed over to army to quickly extract information on all havala trades by him as also to stop wanton killing of innocent girls. NIA has more expertise in the matter. When hawala is purportedly illegal in India, why does the government allow these people to stay in business? Apparently, this fellow has been under ED’s “scanner” (whatever that means). Why are these businesses allowed to exist?

This is probably one of the biggest achievements for Modi Government during its rule. Many more to be dragged out of their pits and exposed!

During the probe, they learnt that Stelkon was also one of the firms Farooq was using for hawala transactions although, on record, Manish Shyamdasani and Mungaram Dewasi were its directors. Farooq used Stelkon and 12 others for import remittances. 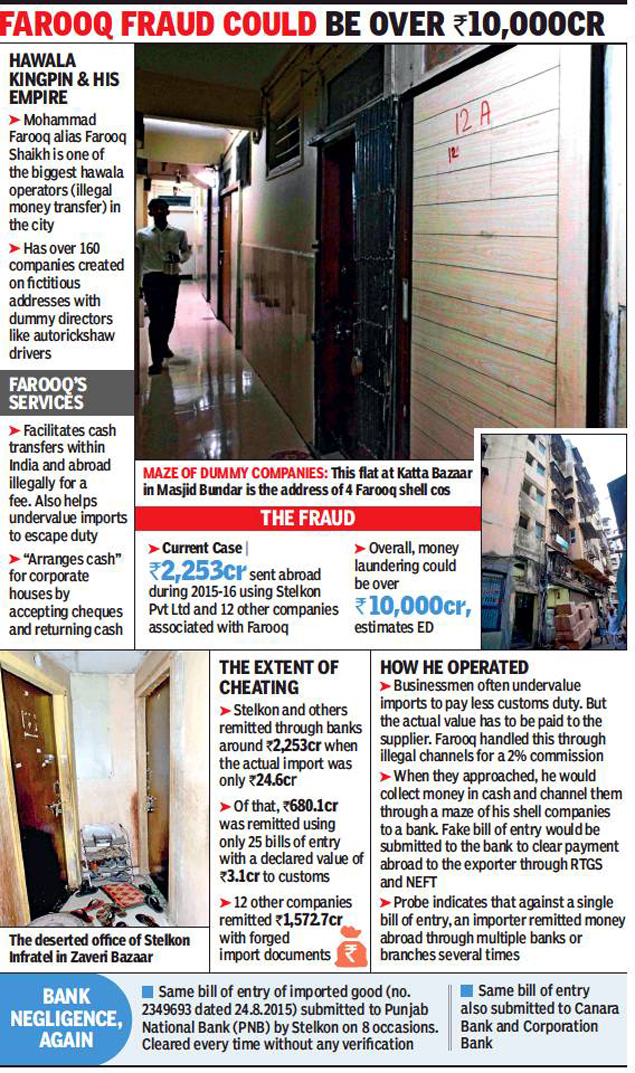 ED officials said Farooq used his accounts with co-operative banks to deposit cash collected from his clients. After routing the money through several layers of the transaction, he would bring the money into his accounts, mainly in nationalized banks, and then make the remittances after submitting forged documents.

The CBI FIR says it appears that the banks did not exercise any due diligence in verifying the genuineness of the importers and the documents submitted during the request for remittances. “There appears to be no cross-checking regarding the veracity of the bill of entry before permitting the amount to be remitted,” it added.

Sometimes, against a single bill of entry, the fraudsters remitted money several times through multiples banks or branches. Or, based on forged documents, the importers inflated the value of the imports and remitted this inflated amount.

Mohammad Farooq and his underworld connections!

This 39-year-old hawala operator is believed to be associated with underworld elements, had set up over 160 dummy companies at fictitious addresses with dummy directors, including an auto driver. For instance, one flat in Katta Bazaar was the address of four of his companies, all of which were all floated using the Importer Exporter Code.

According to the daily, he offered ‘services’ like helping to undervalue imports to escape duty, facilitating cash transfers within India and abroad illegally for a fee, and arranging cash for corporate houses, i.e. accepting cheques and returning cash to them. This entire empire was run from a one-room office in Mumbai’s Zaveri Bazaar.

Farooq has long been under the scanner of multiple authorities. The Navi Mumbai police were reportedly looking for him for smuggling 20,000 pieces of prohibited 13-inch swords and an 8-inch automatic knife. And JNPT Customs has cases against him for smuggling copper in scrap metals.