Dawood Ibrahim and Sridevi!!! Conspiracy theories surrounding Sridevi’s sudden death will force you to think what actually happened with..

Why is Rahul Gandhi so..

Scientists and excavators keep discovering weird and unusual things each day. We have been witnessing unheard and unseen things which are coming into existence in the present era. These things seem to be weird for mankind to believe but excavators are being providing staunch proofs along with their discoveries.

Statue of a sitting Buddha contains the remains of a 1000-year-old mummified monk.

Scientific tests have revealed that an ancient Buddhist statue contains the perfectly preserved remains of a 1000-year-old mummified monk, in what is believed to be the only such example in the world.

The monk, who is sitting in the lotus position, is thought to have starved himself to death in an act of extreme spiritual devotion in China or Tibet in the 10th century. His preserved remains were displayed in his monastery. Some 200 years later, perhaps after his remains started to deteriorate, his mummified body was placed inside the elaborate, lacquered statue of Buddha.

The unusual contents of the statue were discovered in the 1990’s when the statue underwent restoration. Experts were unable to remove the mummy due to the risk of disintegration, so they could do little more than peer into the darkened cavity of the Buddha.

Now, an international team of German, Dutch and Italian scientists have conducted a CAT scan which revealed the monk’s skeleton in perfect detail.

“It was not uncommon for monks to practise self-mummification but to find a mummified monk inside a statue is really extraordinary,” said Wilfrid Rosendahl, a German palaeontologist who led the research. “It’s the only known example in the world. Using a CAT scan, we saw that there was a perfectly preserved body with skin and muscles inside the statue. It’s a complete mummy, not just a skeleton. He was aged between 30 and 50.”

The mummy has been studied by an interdisciplinary team of experts, including radio-carbon dating specialists and textile analysts, at the Meander Medical Centre in Amersfoort, the Netherlands. Using an endoscope, experts took samples from inside the mummy’s thoracic and abdominal cavities and discovered that the monk’s organs had been removed and replaced with ancient wads of paper printed with Chinese characters. 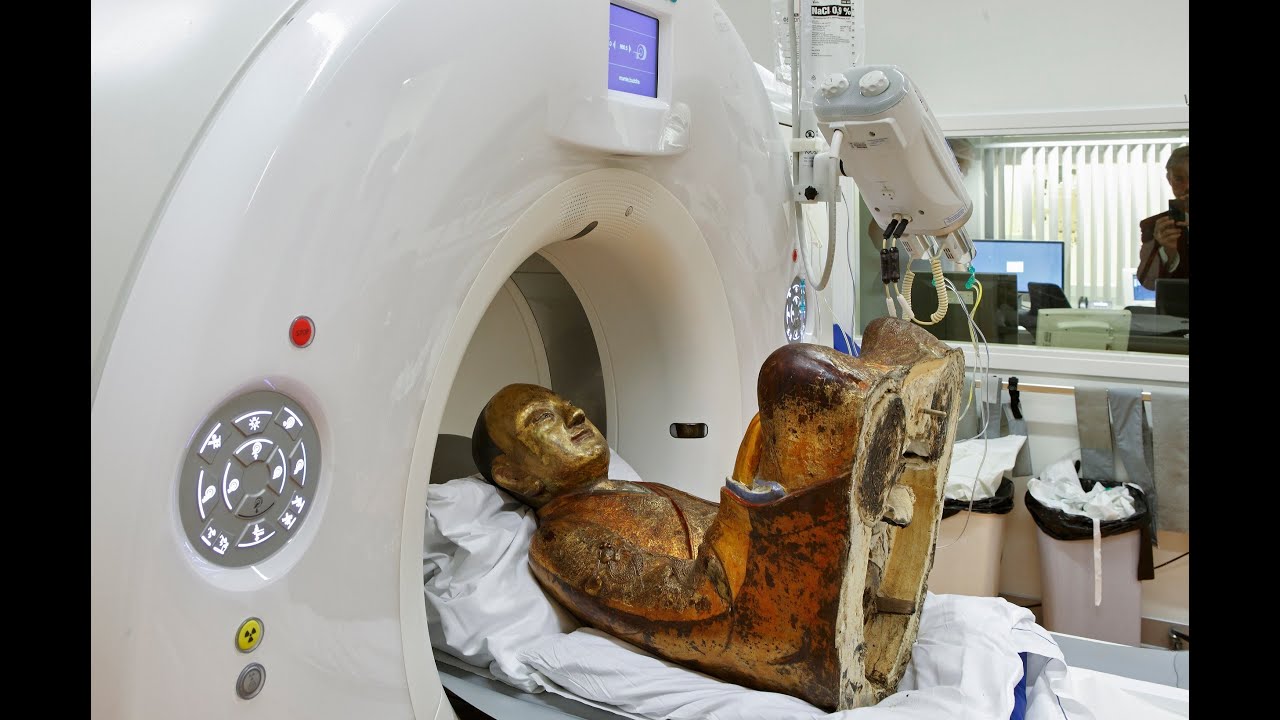 Samples of bone were also taken for DNA testing. The Buddha statue was bought several decades ago on the art market by a Dutch private collector, who had no idea that the mummy was hidden inside.

It will go on display in museums around Europe and is currently in the Natural History Museum in Budapest. “The monk died in a process of self-mummification,” said Dr Rosendahl.

“During the last weeks, he would have started eating less food and drinking only water. Eventually, he would have gone into a trance, stopped breathing and died. He basically starved himself to death. The other monks would have put him close to a fire to dry him out and put him on display in the monastery, we think somewhere in China or Tibet. He was probably sitting for 200 years in the monastery and the monks then realized that he needed a bit of support and preservation so they put him inside the statue”- he added.

Self-mummification used to be a mainly Japanese practice. Discovery News describes this tortuous process in the following way. For 1000 days the monk would eat only nuts and seeds, reducing body fat to a minimum. Then, for another 1000 days, a diet of roots and barks would be consumed. In the last stages, the monk would drink a poisonous tea made from the sap of the Japanese varnish tree to induce vomiting and elimination of body fluids. The toxic nature of the infusion probably helped to kill off bacteria too.

Then, the skeletal monk was put in a stone tomb just fitting around the body. An air tube and a bell were provided. Every day the monk would ring the bell indicating that he was alive. When the bell stopped ringing, it was known that he had died. His mummified body would then be removed after another 1000 days and preserved. Only a handful of monks achieved this stage after the long and gruelling process.

Dawood Ibrahim and Sridevi!!! Conspiracy theories surrounding Sridevi's sudden death will force you to think what actually happened with her. 4 days, 8 big actions : Yogi Adityanath on a mission mode to transfrom UP into ‘Uttam Pradesh’