A Must Read! Kejriwal’s EVM..

The jaw-dropping success of Bahubali-2 at box office must have made Sanjay Leela Bhansali more than worried. The glories of great Hindu Kingdoms covered in the movie Bahubali have awakened the long-lost Hindu pride among Indian audience.  Bhansali’s upcoming movie hero, a mass murderer and a sex pervert Moghal invader ‘Khilji’ is arriving at the most inappropriate moment! Now Box office collections from Pakistan can be the only saving grace for Khilji and Bhansali, if any!

The stupendous success of ‘Bahubali-2, The Conclusion’ has left all Bollywood Actors, directors and producers with their eyes popping out in disbelief.  It has shattered all the previous Bollywood Records at the Box Office with its phenomenal Rs 1,400 collection after just two weeks of release.  The Hindi version of the movie itself has proved enough to reach the untouchable heights of success at Rs 400 Cr. It’s time for Bollywood to face the truth and analyze why their Bollywood movies can’t mesmerize the Indian audience the way this Larger than Life epic movie Bahubali-2 has.

Indian Cinema has always been a reflection of the societal changes over the years. But as we all know, Bollywood is run by Islamist underworld Mafia of Dawood Ibrahim since last 2-3 decades.  They are no longer at their free will to deliver what the mass audience likes. When Babubali- 1 created a history by its magnificient Box-office collections as well as huge popularity, the social media clearly pinpointed how Bahubali was different from other bollywood movies by this pictorial analysis. 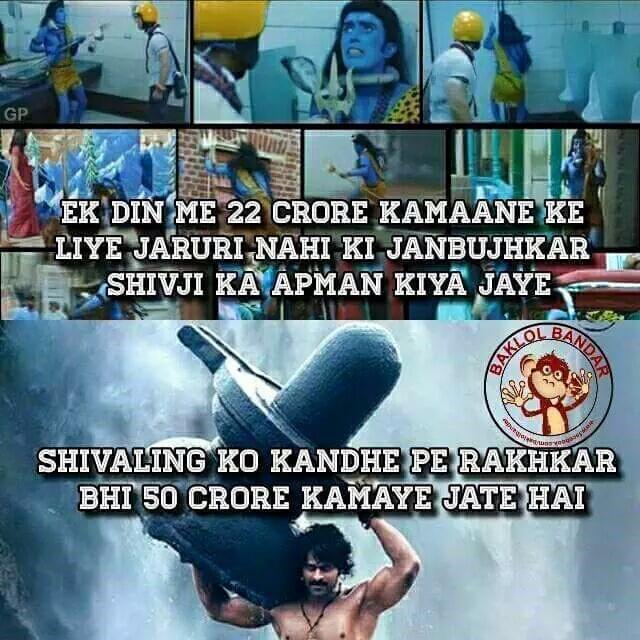 How can Bollywood hope to mint money like Bahubali 1& 2 did? They ridicule Hindu Gods and Goddesses. They depict a Hindu Btrahmin priest as a comedian, thief, rapist or racist. But they always portray Christian Priests or Maulanas as large-hearted saintly figures. They make anti-Indian army movies and earn laurels too. They sing glories of Abdul Latif, a yesteryear mafia don in the movie Raees and cast the superstar Shahrukh Khan to portray the gruesome character. They cast Pakistani actors who mint money and fame in Bollywood and curse India once they are back in Pakistan. Sanjay Leela Bhansali is making a movie on the horrendous moghal invader Allauddin Khilji who massacred lakhs of Hindus and 30000 Muslims.

Here is how Bahubali 1 & 2 are different from these secular bollywood movies. The movie prompts us to look back into our untold glorious history of great Hindu Kingdoms. The courageous and strong Bahubali portrayed by Prabhaas fills us with awe. The character of Shivagami, the Rajmata , the ultimate decision-maker shows how Hindu women played a prominent role in the history.  Character of Beautiful Devasena portrayed by Anushka Shetty shows the spirit of a fighter throughout the movie. She fights as a warrior, she fights for her right as a Kshatriya woman to choose her husband , she fights for the rights of her husband’s and later son’s claims to the throne.

The most refreshing part in the movie is that the Hindus can unapologetically feel the bliss of the occasional presence of the divinity of Hindu Gods like Krishna, Shiva and Ganesha. The barefooted queens are shown making pradakshina holding ‘Agni’ on their heads. The victory of good over evil is the moral of the movie. Too much of Hindu values in the movie might be suffocating to the liberals. But that’s their problem, right?

Indians have eagerly waited for the sequel movie Bahubali-2 since 2015. After all, the nation wanted to know why Katappa killed Bahubali.  Just after the release of the movie, the messages disclosing this suspense flooded on whatsapp and facebook. Liberals were in full action to stall the box office collections. But still, Bahubali-2 has created a grand history at box office. Bahubali-1 had set the expectations very high. The tremendous success of the sequel movie confirms that it has more than met the expectations.

Bahubali-2 is the Indian film with the highest collections of $17M and counting in North America. Can you believe that it has overtaken the movie ‘The Circle’ starring Tom Hanks and Emma Watson at box office?

Well, Bhansali needs to learn his lessons from Bahubali. Instead of glorifying villains, he should be glorifying heros.It’s not that Sanjay Leela Bhansali is any less to S S Rajamauli , director of Bahubali. In Bhansali’s movies too, the grandeur of sets, the brilliant costumes, jewelry of artists, storyline and direction are almost at par with Bahubali 1 & 2. But throughout watching Bajirao Mastani, the movie gave me a creepy sense of guilt for the cruel behavior of Hindu high caste Peshawa family towards Muslim Mastani. Did Bhansali choose Bajirao Peshwe, the unbeatable warrior of Maratha Kingdom as a central character only because of his romantic entanglement with Mastani, a Muslim girl? Would he dare to make a movie on Chatrapati Shivaji Maharaj ?

The liberal media tried their level best to demean Bahubali. But the figures at the box office tell us that the Indian audience made the fools out of the paid media. It makes me recall the UP elections coverage! 325 seats in UP by BJP and Rs 1400 Cr at box office and still counting in the third week by the movie Bahubali! These two similar cases are the glaring examples of how the paid media is totally oblivious of the pulse of the Indians!

Well, at least the film-makers should understand the pulse of the audience. That is, if they want to win our hearts as well as win at box office…like Bahubali!!!