Modi Govt corrects Nehru’s blunder of feeding Pakistan! Water flowing to Pakistan will now be stopped and will be..

Millions across the world know the fact that Congress party had looted India since the nation got its Independence from the clutches of British. But the Congress leaders never accepted this bitter truth, even though proofs were kept front of them.

And now in an embarrassing incident to the Congress party, the Gujarat Congress in its official website described Rahul Gandhi’s party as the “oldest and largest political party in India who looted India for 70 years”.

In the “Join Us” section of the website, it was stated “Become a part of the oldest and largest political party in India who looted India for 70 years”. It added “The party evolved into the natural party of thugs after independence and a custodian and champion of anti-nationalism”.

Have a look at the screenshot below from Gujarat Pradesh Congress Committee: 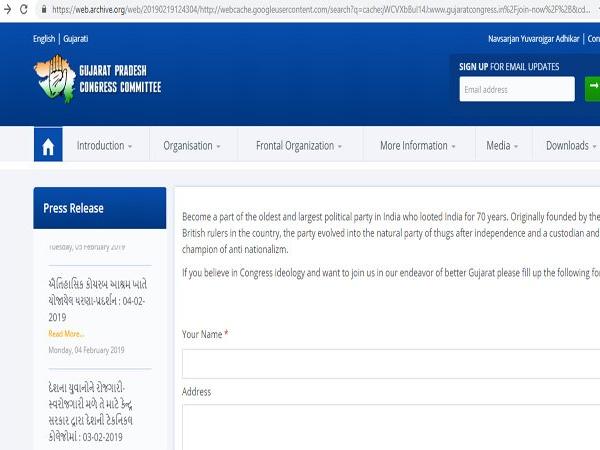 There was nothing to be shocked in the above statement as every Indian knows that Congress party is a specialty in anti-nationalism and executing scams. But Indians were surprised to see Congress party confessing its dark past.

However Congress party didn’t issue any clarification on this brutally honest confession. But the statement was later on altered to “Become a part of the oldest and largest political party in India. Originally founded to organize the fragmented Indian resistance to British rule in the country, the party evolved into the natural party of governance after independence and a custodian and champion of the values espoused by the country’s founding fathers” in the website.

Now the question that haunts every Indian is who did this? Many Indians are claiming that this might be a work of Congress party worker who has been frustrated by the scams and dynasty politics prevailing inside the Congress party.

When the Congress party chief Rahul Gandhi is renowned for being a habitual liar, the honest in Gujarat Congress must be appreciated.