Kannadigas are angry at their yet to be CM Kumaraswamy for touching the feet of Sonia Gandhi, just for..

Kannadigas are angry at their..

When British invaded India, they not only wanted to loot the precious wealth of our country, but also eliminate the Hindu culture from the soil and implement Christianity in India. Since 200 years, relentless efforts were made by the British and their evangelist’s friends from the Vatican.

The same trend continued even after Indian gained Independence where the Christian Missionaries started forcible conversions in many parts of India and forced people to follow Christianity. This became a rampant business in Tamil Nadu, Kerala, Manipur Nagaland where people of backward classes were lured with money, jobs, houses and asked to convert to Christianity. The biggest mafia in mass conversion rackets were funded by international organisations and NGOs who were in direct contact with so-called secular parties in India. They received all support from these political parties who utilized the converted people for their vote bank politics.

The plot of missionaries was to divide Hindus and break them on caste basis and forcibly convert them to Christianity. One of the biggest projects which started mass conversions in India was the Joshua project which aimed to convert the entire Nation into Christianity. Under the same organisation, the ‘divide Lingayats’ project was taken which through Congress party passed the proposal to separate Lingayats from Hindu community.

The Joshua project started in 1995, for the first time Evangelist in the television made a statement saying “I feel that these beautiful people, they are so hungry for god. You know this is the largest democracy in the world, over a billion people, and perhaps this would be considered the most religious country on the earth. But, they’re looking for the god. I believe they’re open to Jesus, and my hope is to see 100 million Indians to come to the Lord Jesus Christ in the next few years.”

This project picked up the pace with massive amount of funds being pumped into it. The mass conversions received help from the previous Congress government which in 2012 gave  official provision for Missionary work in India. Under Sonia Gandhi’s leadership, the government included special ‘Missionary Visa’ category with ‘No objection to return to Indian Endorsements’.  This opened doors for all missionaries who literally made India into conversion hub.

Check how these missionaries fool people in their dirty games!

Now these same people have given a call to all Christian institutions and Churches in India who work against PM Modi and Hindus in the upcoming 2019 elections. This news was exposed when the Archbishop of Delhi Anil JT Couto wrote a letter to all Christians asking them to attend prayer meet every Friday until 2019 elections. This letter specially stated that the country was facing “turbulent political atmosphere which poses a threat to the democratic principles enshrined in our Constitution and the secular fabric of our nation” which showed that it was a political plan to brainwash all Christians against PM Modi.

The Archbishop made a fake allegations that the Christians and Muslims of the country are being targeted by Hindus and this needs to be stopped by uniting all Christian groups. He calls for some prayer and fasting so that the present government is removed and a pluralistic government is formed. This is nothing but an indirect way of conveying the message to remove PM Modi in the upcoming elections and help Congress win.

Take a look at the letter

As we look forward towards 2019 when we will have a new government, let us begin a prayer campaign for our country” from May 13, on the anniversary of the Apparition of the Blessed Mother at Fatima in Portugal, the letter read. 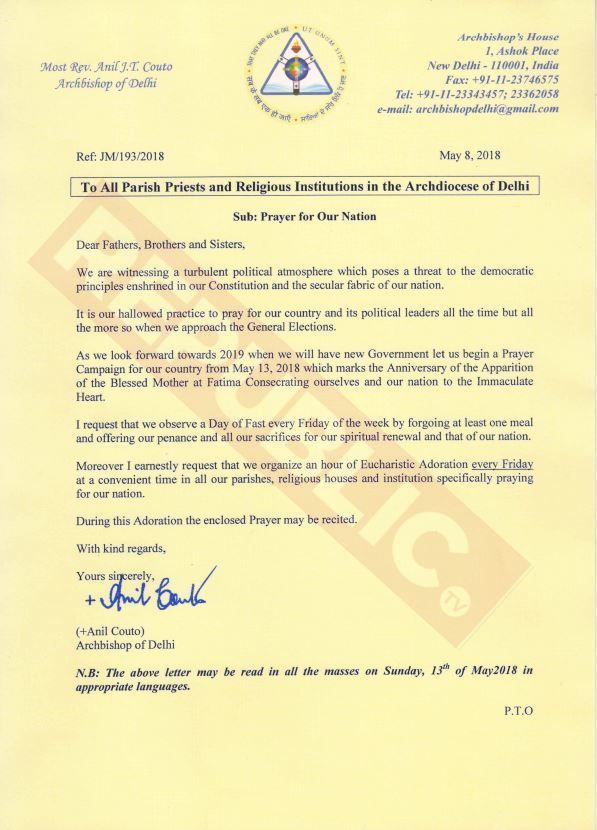 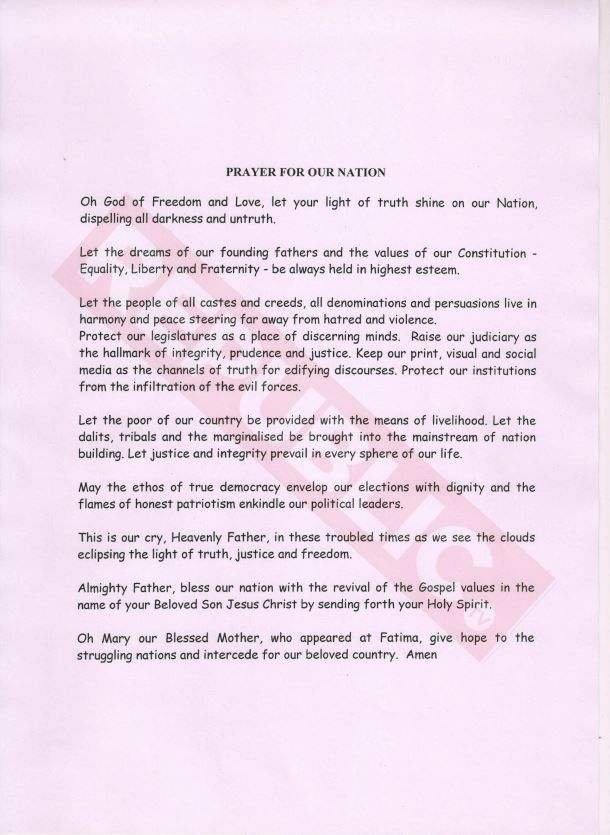 This is not the first time that the Church has called to unite against PM Modi and Hindus but even before the Gujarat elections, the same formula was used by these missionaries. Just few days before the Gujarat elections, the Archbishop of the Gandhinagar had called all Christians to work against the Nationalist Forces and defeat PM Modi and BJP in the 2017 Gujarat elections. The Archbishop specially mentioned Christians to fights against Nationalist Forces which is nothing but fighting against the country.

Even before the Karnataka elections, the Muslim board and Christians has asked all their community people to support Congress and eliminate BJP. The Muslim body had displayed the names of the candidates who needs to be supported by Muslims which was clearly a violation of the Representation of People Act‘s sections relating to appealing to people on grounds of religion, caste or community and to promoting enmity between different classes of citizens. 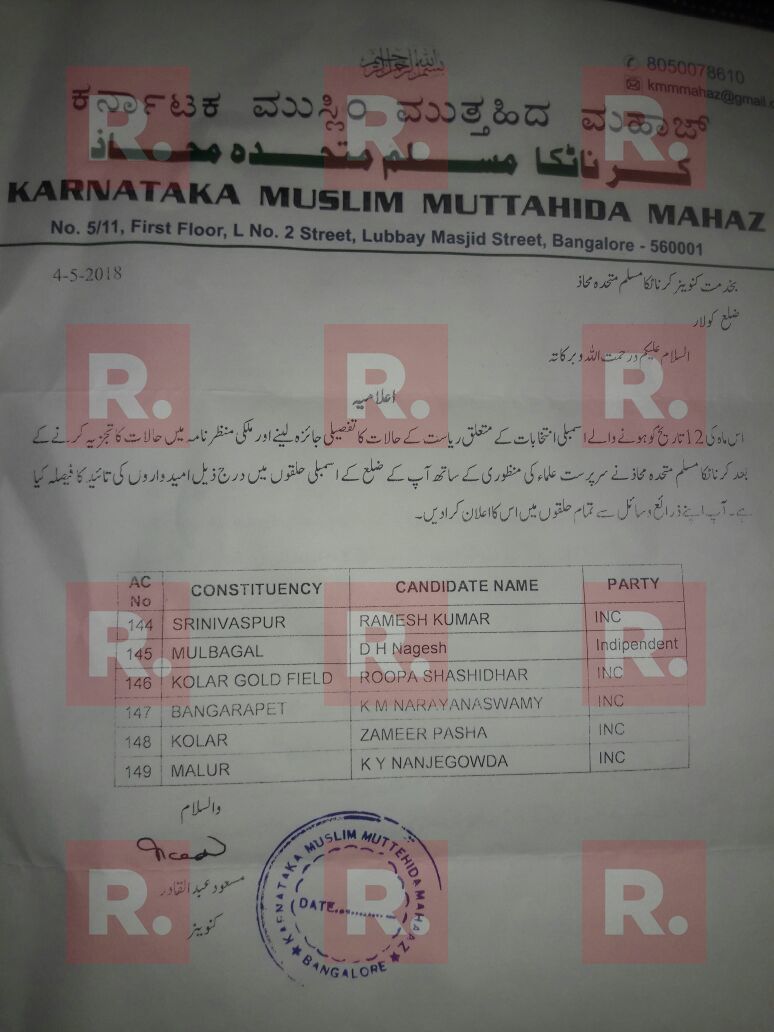 So, all these so-called seculars in the country are raging a war against Hindus and Nationalists forces on the behest of their masters in Congress and Vatican. It is a well-known fact that the Christian missionaries are controlled by the Vatican and they are the ones who influence the appoint the Archbishops in India.

The Sonia Gandhi and Rahul Gandhi have a close relationship with the Vatican which is the main reason why they are being backed by these Missionaries. It is not just a random letter, but a well-planned attack by the Missionaries with the help of Gandhi family to rage war against Hindus.

These Christian missionaries who do not even let Dalit Christians inside the Churches are today preaching that they need to be treated equally. They did not raise their voice even once when the entire Dalit community was attacked in Tamil Nadu by Muslims radicals. These people did not raise a word against those criminals who chanted Azadi slogans against India in JNU. They did not speak for our Armed forces when the same Congress and other pseudo-secular parties called the Surgical strike a FAKE event.

Why are these people today giving lectures and talking philosophy now??? Why are they bringing religious angle into politics? Is this the secularism they talk about. Is attacking Hindus in the name of a minority the real face of seculars in India?

Let the people of the country see the true colours of these pseudo-seculars in our country and how they silently are destroying the Nation on orders of foreign organisations!