Smashed liquor bottle on his head, punched him on his face and kicked him in stomach, this is how..

Smashed liquor bottle on his..

Why can’t Yogi Adityanath be the rotating CM of each state? This is what the people of India are demanding right now. It will be an audience to witness how the justice is being served.

A total of 40 dreaded criminals have been killed & more than thousand have been arrested in 1200 encounters under d #YogiGovt's drive against criminals who were patronised by d previous #SP dispensation pic.twitter.com/YuOGn4SJO7

Since the new government came to office early last year, 1,240 encounters have taken place. According to data provided by UP DGP’s office, 142 wanted or criminals with rewards on their heads have surrendered.

Criminals are on a surrender spree in UP following the Yogi government’s instructions to district police chiefs to aggressively hunt them down. Since the new government came to office early last year, 1,240 encounters have taken place in which 40 criminals have been killed and 305 injured.

The crackdown that started on March 20, 2017, has led to 2,956 arrests till February 14. Cops have also seized 169 properties worth Rs 147 crore of criminals on the run. According to data provided by the UP DGP’s office, 142 wanted or criminals with rewards on their heads have surrendered either within the state or outside. Besides, 26 criminals have not secured their release despite getting bail. Seventy-one have got their bail bonds cancelled and gone back to jail. 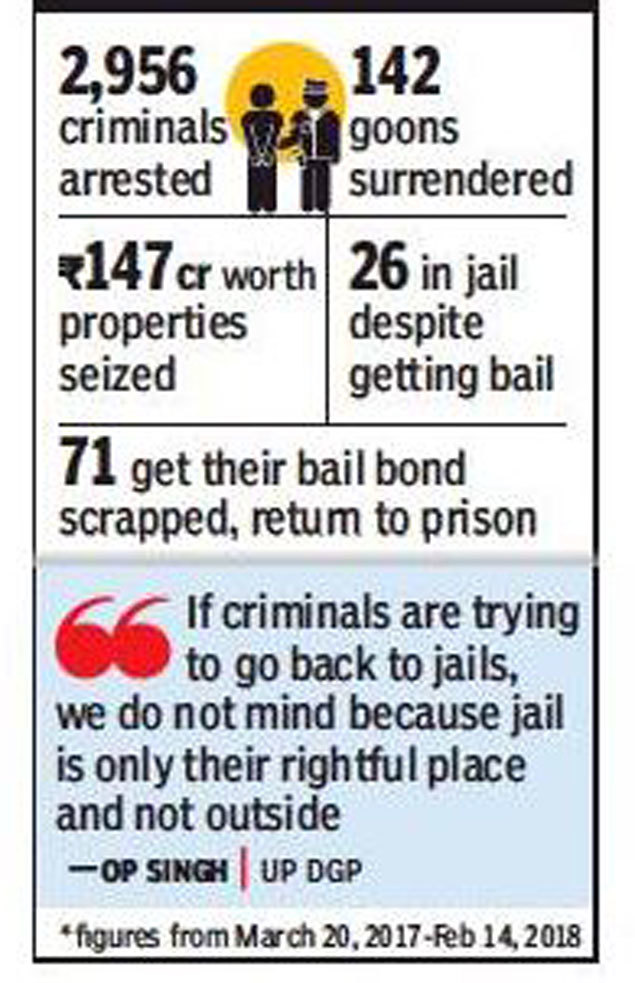 So, it takes “a Yogi” to cleanse the filth of the society that was created by decades of corrupt rule by BSP/SP doing dirty politics on Dalits/Muslims card. Yogi is doing a great job decriminalizing Uttar Pradesh and bringing law and order back.

Yogi Adityanath is an Institution himself. Criminals and crime need to beware. Lessons to be learned from Yogi Government go for frontal attack on Nirav Modi and Vijay Mallya. The Rest will voluntarily surrender their frauds, including major Scamsters of the nation.

“If they (criminals) are trying to go back to jails, we do not mind that because jail is only their rightful place and not outside,” UP DGP OP Singh told on Saturday. “The results (of the crackdown) have been unprecedented… never in the past has this kind of straight message conveyed to the criminals so clearly. They will not be allowed to play havoc with the lives of common citizens,” he said.

Police chiefs have been asked to prepare dossiers of all those on whom either rewards have been announced or are at large, the DGP said. “We have launched a multi-pronged attack. The number of goons against whom Gangster Act has been invoked is also biggest so far.” Maange alias vinay, main accused in a double murder case in Meerut, surrendered on February 2nd. Sources said a massive manhunt had scared Maange who feared he would be killed in an encounter.

“Let me honest and accept my mistake. When PM Modi thought of Yogi as CM, I wrote very strong disagreeing on the same forum. I am not BJP or Congress fan. I thought Yogi will have implementing BJP agenda. I am a minority a Jew but that was not the reasons of my worries unlike others. Well after looking his administration and his honest approach, I would like to admit and say sorry for my mistake. Now I admire him and looking forward for his two terms at least”– said a true Indian reacting to this news.