One Nation One Election! Read..

Karnataka elections are on the peak. With each passing day, the fight between all the parties Congress, BJP and JDS is heating up. Fake voter registration, hoards of cash and jewellery are flowing to attract people for votes. Controversies and attacks surrounding the elections doesn’t seem to have a halt.

Karnataka BJP filed a complaint with Chief Electoral Officer, Karnataka against Jignesh Mevani, Prakash Raj and others for 'having used defamatory & abusive language' against PM Modi, BS Yeddyurappa and Shobha Karandlaje at an event on April 29 in Bengaluru. (file pics) pic.twitter.com/8jflPEkudU

The complaint has been lodged against the duo because both of them used filthy language for the Prime Minister of the nation, BJP’s Karnataka unit chief Shri BS Yeddyurappa and MP Kumari Shobha Karandlaje during one of their rally in the countdown of upcoming Karnataka Assembly Elections.

This all took place during a “Saving Constitution in Karnataka” rally held on 29th of April in Bengaluru at Freedom Park by the alleged persons. During the rally Jignesh Mewani in his speech called Honourable Prime Minister Of India, Shri Narendra Modi as a “Corporate Companies salesman and a thief who has looted our country” He said this with an ulterior motive of harming the reputation of PM and state BJP President. The party also accused Prakash Raj of attempting to tarnish the images of PM  Modi and Yeddyurappa.

The complaint stated that the events of such kind of people who tries to disturb the harmony of the country must be perfectly monitored and they should be strictly punished if they try to perform any wrongdoings. Further, it adds that the concerned district and state authorities, maintaining proper law and order should take immediate actions on all such type of cases.

The party questioned that even after so many complaints lodged against the aforesaid persons before also for the same reasons why no action is taken by the Election Commission still. It requested the Commission to restrain these persons from holding any public meetings during the poll period so that again and again they cannot defame the reputed persons of the society.

The complaint also sought an action against a senior politician and JD (S) leader AK Subbaiah who had said that “Yeddyurappa along with his fiancee would runaway once polls results are out”.

It is not the first time Mevani and actor Prakash Raj has tried to defame the image of honourable Prime Minister. Before this also they have made many attempts to tarnish his image. Mevani, while addressing a press conference in Karnataka’s Chitradurga constituency, had asked people to “disturb” Modi’s April 15 meeting by “throwing chairs in the air”.

“The role of youth is important today. When PM Modi arrives at Bengaluru on April 15 to address a public gathering you mingle with the crowd, throw the chairs in the air and disturb his meeting,” Mevani was quoted as saying.  Not only this Jignesh Mevani has also once insulted PM by saying him “Buddha”. The people in order to target PM  Modi has always steeped low that they forget every ethics and behaviour.

The high-stakes Karnataka polls for its 225-member state assembly will be taking place on May 12 and the counting will take place on May 15. It is worth to watch what the results uphold as Karnataka being the last major state under Congress rule, Congress don’t want to lose at any extent. On the other hand, BJP is in full swing to have Karnataka in its kitty.

Here you can read the complete complaint copy!!! 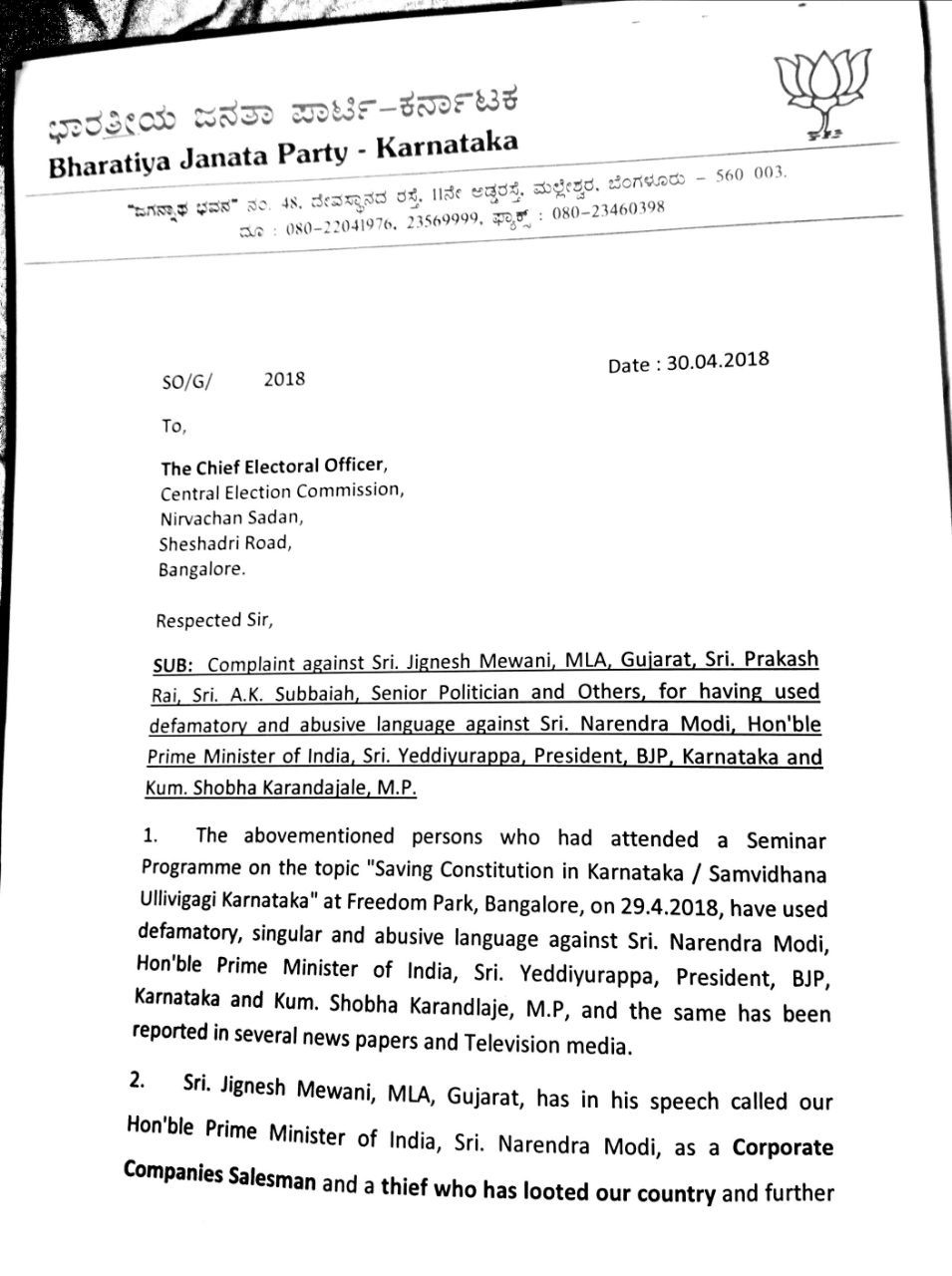 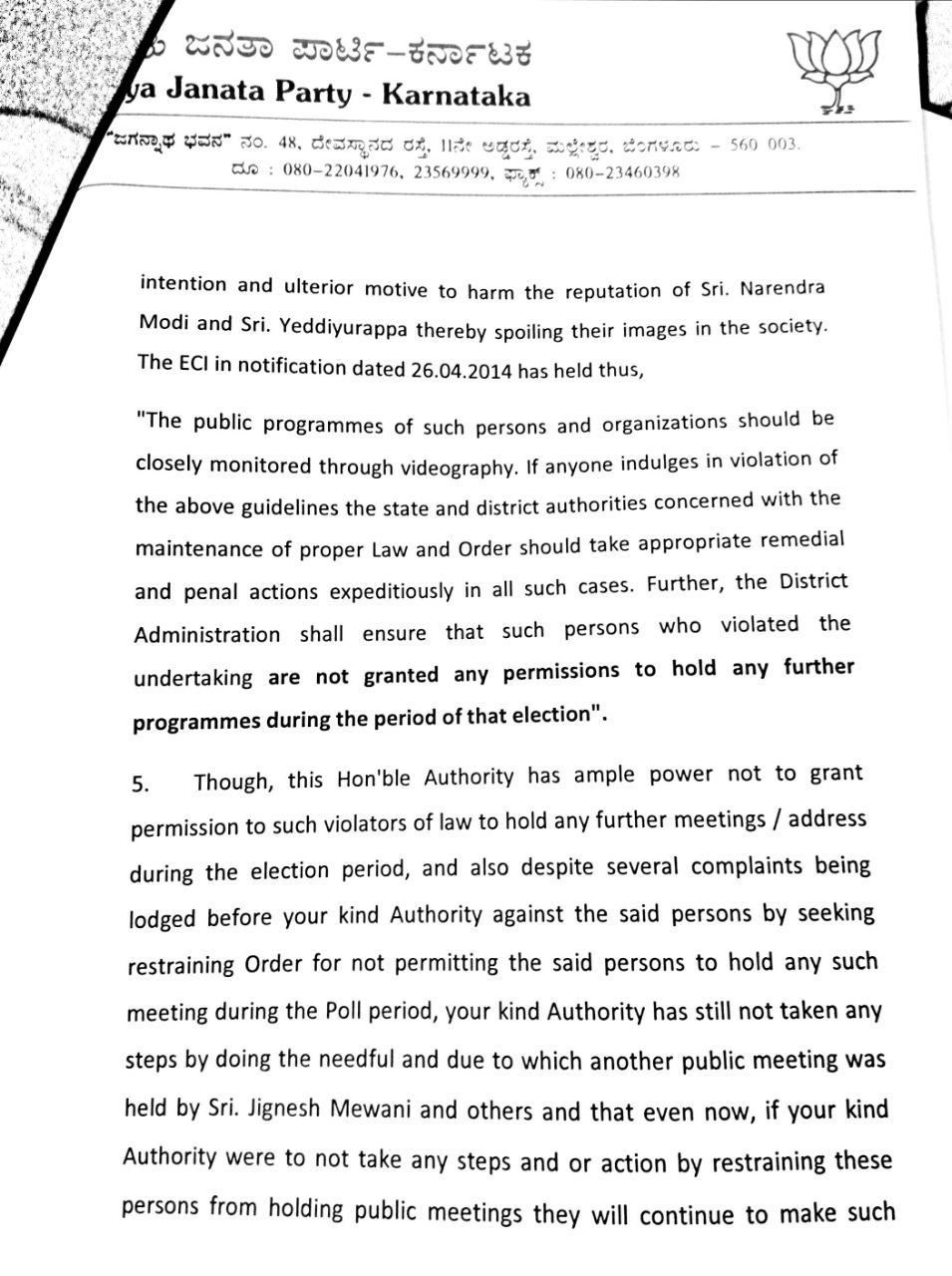 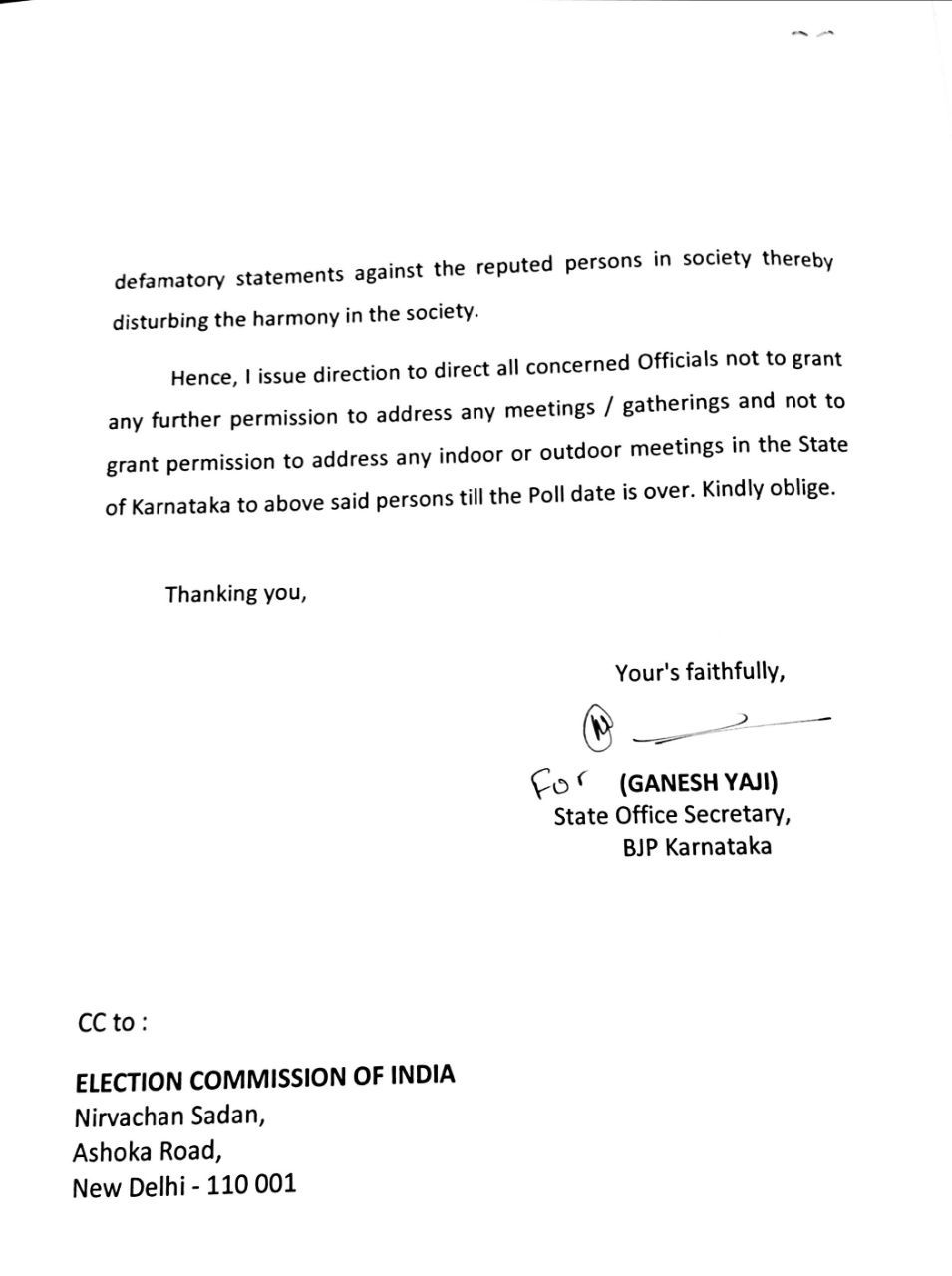