Meet the undefeated leader who became the Chief Minister without a political Godfather! Do you know what are his..

Meet the undefeated leader who..

Ever since India came under the rule of British, millions of people fought against them to make our country independent and gain freedom. There were thousands of people who laid their life fighting the battle of independence, but unfortunately, India doesn’t remember more than 3 names in history. Since childhood, we were made to read history books with the twisted story making us believe that only Gandhi and Nehru got us independence.

India made two Gods after 1947, One was Gandhi, the ideological God and other was Nehru, the Political God. People forgot the sacrifice of great people, soldiers, women and children who laid their lives for the country.  But the present generation largely believes that it was Gandhi’s Ahimsa that got us freedom. This perception was created deliberately to misguide the entire generation and belittle the contribution of freedom fighters like Subash Chandra Bose, Bhagat Singh, Chandrashekar Azad and many other revolutionists.

But do not worry, this story isn’t about reminding the contribution of Azad or Bhagat Singh…But a truth mostly which is remained secret for decades!

Dr B R Ambedkar in 1955 in an interview to the BBC declared that it was Netaji Subash Chandra Bose who got us independence and not Gandhi. These words when analyzed will clear the doubts of what exactly did Ambedkar mean.

If we look at history, we will know that Gandhi was not in India during the peak time of British rule. When he was 18 years, he left to London for higher studies in 1888. It was there he met a person called Hermann Kallenbach. It is said that they had close intimate relation with each other. Joseph Lelyveld, a writer who had observed Gandhi very closely had written few books about the relation between Gandhi and Hermann Kallenbach. The book portrays a very contrasting character of Gandhi than what we heard about him.

His books and the writing had gained huge publicity and was printed in the headlines of UK’s Daily Mail, Wall Street Journal about Gandhi, he had described Gandhi as “a political incompetent, a fanatical faddist, implacably racist, and a ceaseless self-promoter, professing his love for mankind as a concept while actually despising people as individuals.” The book is also said to have revealed many dark secrets of Gandhi’s personal life, his choice of sexual partner which included letters written by Gandhi himself.

This book was banned in India and was never released. The then Chief Minister of Gujarat Narendra Modi himself called for the ban and the Gujarat assembly passed a resolution against the book. Most of the letters were destroyed by Gandhi, however, after his death, 13 letters were auctioned and were eventually acquired by the National Archives of India.

Kallenbach was a highly influential person and was a close aide of the Rothschild’s family. It was sometime in 1904 when Gandhi was working in South Africa Kallenback introduced Gandhi to the Rothschild family. Slowly the relation between Gandhi and Rothschild family grew and later on orders of Rothschild, Kallenback donated Gandhi his 100 acres (4 km²)  farm near Johannesburg.  This farm was named Tolstoy Farm named after Leo Tolstoy, the famous writer of Russia.

So eventually Gandhi became one of the very close friends of Rothschild family and the game started.

On the other side, in India Bengal was the hot hub of freedom fighters, it gave various freedom fighters like Khudiram Bose, Aurobindo Ghosh, Resh Bihari Bose who had made life impossible for British in the east. The British then had planned to shift the Capital to Delhi. They had realised that only an India can break the unity of freedom fighters which was gaining huge momentum.

Same time the echoes of World War 1 was being heard and British wanted a massive army to fight in the war. They needed foot soldiers who were ready to die. Winston Churchill gained huge popularity in South Africa in the drama created by the Rothschild family to gain control over the world. Gandhi who was in South Africa got in contact with Churchill and they both played in the hands of Rothschild.Gandhi was a staunch supporter of the Colonial British and never missed an opportunity to please Queen Victoria. It is also documented that when Queen Victoria died in 1901, he laid a wreath on the pedestal of the Queen’s statue in Durban and distributed picture of the Queen among the school children. When George V was coroneted, Gandhi had written a letter saying “The Indian residents of this country (i.e. South Africa) sent congratulatory cablegrams on the occasion, thus declaring their loyalty”.

In 1909, when Lord Ampthill visited South Africa, Gandhi did all service to please him. Gandhi had then made a statement condemning the acts of freedom fighters in India who shed their blood for the country.  So, Gandhi seemed the right man for the British who could be introduced in India to break the united freedom fighters.

Kallenbach was the mediator and a micro manager between Gandhi and Rothschild. They introduced a new term called the Satyagraha or the non-violent movement. With numerous letters that Gandhi wrote about Satyagraha, the British decided to bring him to India and depict him as the leader of mass and Satyagraha as the only means of achieving freedom.

Finally, in 1915, Gandhi returned to India with a prepared script and within no time he became a leader of masses without doing anything. Through his speeches and political support, he suppressed the freedom movement which had gained momentum during the 1915’s and spoke against all those people who took on British. British very well knew that his Satyagraha could do no harm to them and would rather create a rift between Indians. The non violence movement was convenient for many Indians who were scared to fight against the British, those people who found slavery was safe than being rebel accepted non violence and hide themselves behind the satyagraha movement.

The British did not make Gandhi hero without any expectations…..Gandhi’s job apart from sabotaging freedom movement was to convince Indians to send lakhs of Indian soldiers for World War 1 to fight for the British. So immediately after his return to India, he made sure Indian soldiers were sent to World War 1.

An agreement was between the British and the Gandhi lead INC and 13 Lakh Indian soldiers were sent to World War 1 to fight for the British. Out of which 1.11 lakh soldiers laid their lives.

The slaughtering of Indian soldiers did not stop there, but during the Second World War Gandhi lead INC again made agreement with British to send 25 lakh Indian soldiers, of which 2.43 lakh soldiers were killed.

Gandhi who claimed Ahimsa and Satyagraha was his motto did not mind sending lakhs of soldiers to fight for a war India was never part of! Where was his non-violence principles then? For whose benefit was this done??

British used Indian soldiers in the worst area of war and in most dangerous sectors. They were not provided with good ammunition and were asked to fight with hands many times. They were sent to worst terrains, stand to defend in the front line in Battle of Gallipoli, in the Sinai, Palestine, Mesopotamia Campaigns, the Siege of Kut and in the Battle of Tanga in East Africa. Without food and water, many soldiers died in unknown lands where their body was not even recovered. Old men above 50,s 60s were part of the battalion who were made to fight for British!

Was this the Ahimsa that Gandhi preached?

In 1930, Gandhi called for Purna Swaraj, but nothing changed the situation of slavery and the entire movement went down without making the slightest impact. He never supported Bhagat Singh, Chandrashekar Azad, Raj Guru and allowed the British to hang them. Things started to change after 1930’s when Subash Chandra Bose started gaining massive support. His freedom struggle was welcomed by all and was treated as the next commander of the Freedom movement. He opposed the Gandhian means of Satyagraha which had not made any difference, but rather helped British gain complete control over India. Subash Bose very well knew that British was master in playing divide and rule and Gandhi was the first pawn. Bose was not comfortable in Congress although he had more support than Gandhi and Nehru himself. When he was elected as the President of Congress in 1939, Gandhi and Nehru along with their loyalists were upset with the development. 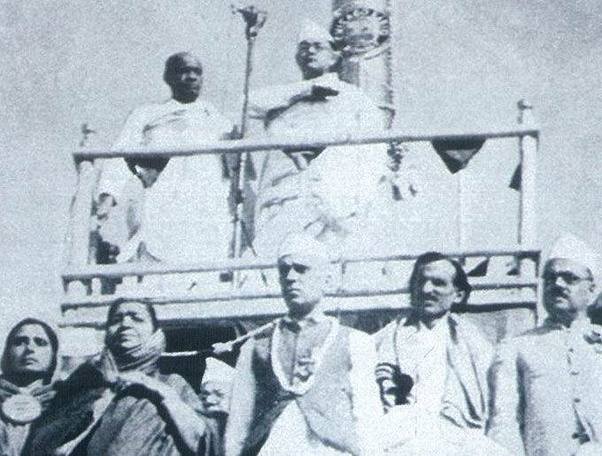 Bose had opposed Gandhi sending soldiers to fight for British and instead wanted our soldiers to take the help of Japan and kick out British from India, but he never got any support from INC.

The Indian National Army was gaining huge support and people stood behind Subash Chandra Bose more than they trusted Gandhi. This had caused great concern to the British and few members in the Congress party. Since there was arrest warrant against Bose, he kept travelling abroad and tried to gain the support of Japan, Germany to stand against the British.

But in 1945, his aircraft met with an accident and since then Bose disappeared to the outer world. This again gave Gandhi, Nehru the upper hand in the country who made a secret deal with the British that they will hand over Subash Bose to British as war criminal if he ever returns to India said the letter. 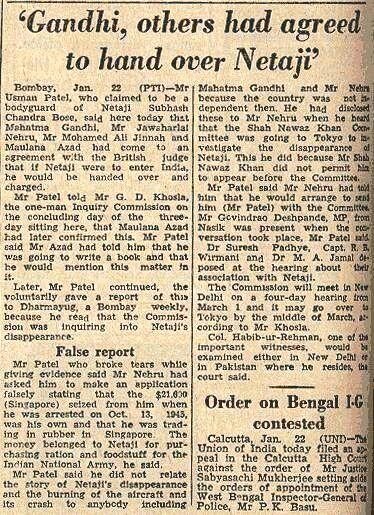 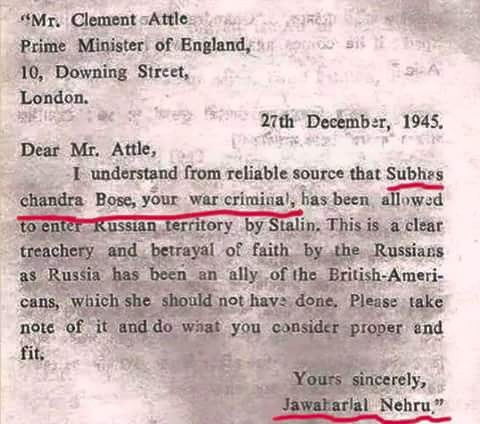 But the huge sentiment for Bose in the country made the soldiers go all out war against the British and they were not able to control the anger of the people. This created panic among the British and ultimately the negotiations of Independence started.

This is exactly why Dr Ambedkar declared that it was NETAJI, not GANDHI who got us INDEPENDENCE!

It is left to the people to decide who is the real hero and who exactly played in the hands of British.

Battle of Gallipoli, in the Sinai, Palestine, Mesopotamia Campaigns, the Siege of Kut and in the Battle of Tanga in East Africa.