Farmer in Andhra Pradesh tortured to death as he didn’t accept demands of giving his land for CM Chandrababu..

English Translation: Modi ji’s tourism minister has crossed all the limits of shamelessness. Selfie with the body of a martyr. Can there anything be more painful and shameful?

Have a look at the below image which was presented by Randeep Surjewala to claim that Union Minister of State for Culture and Tourism Alphons Kannanthanam took a selfie front of the body of a martyr. 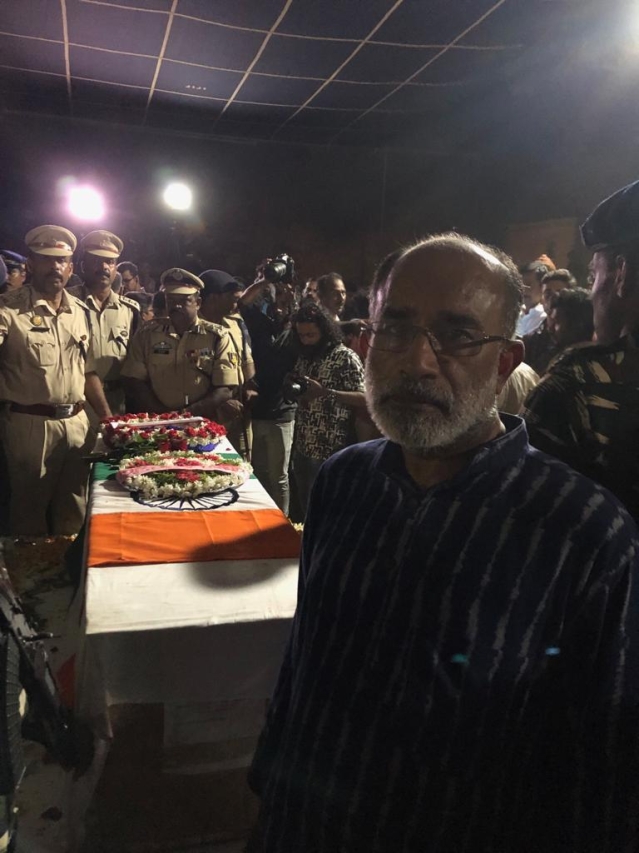 Looking at the image, anyone would be forced to believe that Union Minister of State for Culture and Tourism Alphons Kannanthanam carried out this shameful act. But wait, pictures can be deceiving. And a cropped image might deceive you even more.

The image that looked like a selfie was originally posted on Alphons’s facebook account but when people started to bash the image, it was deleted. Later Alphons issued a statement and said “The person who handles my social media account got panicky when he saw that I was being trolled for it. Without even consulting me, he deleted it. When I got to know about it, I asked him to repost it along with a couple of other pictures from the same spot”.

The Congress party picked up one of the image of Alphons Kannanthanam and cropped it from sideways so that it would look like a selfie. Have a look at the below image that will expose the lies of Congress party.

Yes, this was another fake news spread by Congress party at the cost of CRPF martyrs.