PM Modi’s dream of enabling house to each and every Indian will soon be a reality! Know this scheme..

Exclusive!!! PM Modi’s missing marks card found by none other than Congress leader Ramya, and this has worried the..

When Bhagat Singh was hanged by the British on March 23th 1931, he was only 23 years. An age which most youngsters enjoy their college days with friends and family. But this boy had vowed to defeat the British and chase them out of India. The valor and courage of this boy inspires millions of Indians even today.

The revolutionary team which had people like Chandrashekar Azad, Rajguru, Bhagat Singh and Sukhdev had sent shivers down the British. Their exceptional bravery in attacking the British, inspiring youngsters was something which scared the British to an extent that they called them the biggest threat.

It was on 13th April 1919, India witnessed one of the biggest massacre that took place in Amritsar, where the British officer General Dyer ordered the murder of thousands of innocent Sikhs who had gathered to participate in the annual Baisakhi celebrations, a religious and cultural festival for Punjabi people and also to condemn the arrest and deportation of two national leaders, Satya Pal and Dr Saifuddin Kitchlew. But from nowhere the British surrounded the public garden blocking the only gate which it had and on orders of General Dyer, his troops started firing continuously for 10 minutes targeting the large crowd which resulted in the death of thousands of people including women and children.

Within the blink of the eye, hundreds and thousands were killed and the entire park was covered with dead bodies with blood flowing from every corner. This incident shook the entire country and saw the real face of the British and their intention. On the same day, a small boy who was on his way to school, as usual, heard his people speaking about the brutality that happened in the Jallianwala Bagh. The small boy who heard this immediately ran bare foot towards the park to witness the incident.

What he witnessed was a park turned into a graveyard with thousands of body lying around and his feet soaked in blood.  The blood soaked maidan and the echo of cry was tight packed in his heart for years to come. The boy sat on the wet grounds and starting collecting the blood soaked soil into a bottle. He carried the bottle to his house with misty eyes and placed it in the middle of his room and started performing ritualistic pooja to it. When his sister asked him what was he doing, he answered with grief and anger, “This is the pure blood of great freedom fighters killed by the British. I am paying my last tribute to them who fought to make my India a free land”.
A small boy of 11 years old, then made a vow to dedicate his life to fight for the freedom for the country and promised that he will never look back. That was the courage of young Bhagat Singh.
Since then he joined the revolutionary movement along with Chandrashekar Azad and many other youngsters who created tremors across India against the British. They fought against the British for many years, until Bhagat Singh, Raj Guru and Sukhdev were arrested.
All 3 were convicted in the British court for treachery against the British government and were sentenced to death. But the courage in these young boys was so much that not once did they get perturbed with the decision. When all three were put to jail, they infact spent their days challenging the British even in jail.
Bhagat Singh had then wrote many letters to his family and to fellow Indians in which he describes that the death is the biggest honor to him as he considered that there was no bigger gift than sacrificing life for the country. He said that the British were only able to kill him but they could never kill the spirit in him, the British could only destroy his body but not his ideology, they could stop him, but not his fight against the British. Until the British leaves this country, my fight will continue whether I am dead or alive said Bhagat Singh.
Bhagat Singh said that I will pose more danger when I am dead than when I am alive as my ideology will be taken forward by million Indians, they will take forward my fight which will be hundred times more powerful than me.
“I will wait for the day when I am hanged, I will wait for the day when my fellow Indians will watch me being hanged, the day when my brothers and sisters will vow to destroy the British.”
Hearing these words of Bhagat Singh, his mother had sent a message to him “My son do not ever change your ideology, do not lose your spirit, your death will be remembered for generations, your sacrifice will be respected for centuries….No mother can get a better son, no mother can be as proud, let the words Inquilab Zindabad be echoed through out the country.”
Bhagat Singh in his last days of his life writes a letter to his mother in which he says “Mother do not worry, do not cry, In order to chase the British away from India, I will take rebirth and come back to the same land within a year.”
These words of Bhagat Singh had moved his mother so much that she had not taken food for many days. Bhagat Singh had spent his last days reading books of all revolutionary fighters including Lenin. The speed in which Bhagat Singh read books made it impossible for the jail warden to supply him books. On the last day of his life he was reading the book of Lenin, when he was asked to prepare to be hanged.
Bhagat Singh without showing a bit of anxiety or fear on his face had said can’t I come after reading the book?!

His warden was stunned at his calmness and bravery which he had never witnessed. He was finally taken to the execution cell where he was joined with Rajguru and Sukhdev who were also seen smiling and greeting each other. All three were hanged on 23rd March 1931 and the 3 great men chanted Inquilab Zindabad for the last time and they were gone in seconds. 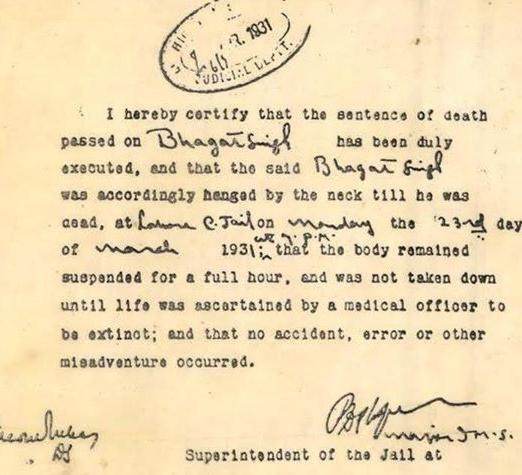 The British shifted their bodies secretly near Sutlej river where they were being cremated. But when the news spread, the entire village and his supporters gathered within minutes chanting slogans against the British and started collecting the ashes of the half burnt body of Bhgat Singh. Major revolt broke against the British which spread across India and the reverberated in the minds of people.
It was then thousands of people gathered near the Congress headquarters chanting slogans against Gandhiji and Nehru for abandoning Bhagat Singh, Rajguru and Sukhdev.  But the answers given by Gandhiji, literally broke the hearts of thousands of people.
Gandhiji Said, “It is not that I did not want to save Bhagat Singh, but you should also understand the mistake committed by him” “I pleaded with the Viceroy as best as I could. I brought all the persuasion at my command to bear on him. On the day fixed for the final interview with Bhagat Singh’s relations, I wrote a letter to the Viceroy on the morning of 23 March. I poured my whole soul into it, but to no avail. I might have done one thing more. I might have made the commutation a term of the settlement”.
https://twitter.com/iMac_too/status/561172811457101824
It is sad that our own people believe that saving a man like Bhagat Singh was’nt important to India and his freedom struggle. Even after his death, it was understood that Jawaharlal Nehru had snooped on his family for nearly 20 years for the reasons known to him.
India got some of the most brave and courageous leaders that no country had, but we failed to respect them and save them from the hands of our enemies.