The reality behind “female pilgrims”..

While Rahul Gandhi criticized Prime Minister Modi today for keeping the details of the Rafale Defence Deal “secret”, it was exactly on those grounds that A.K. Antony refused to answer then- CPI (M) MP.

Hours after Congress President Rahul Gandhi reacted to Prime Minister Narendra Modi’s speech in Parliament and demanded that the details of the Rafale Deal be made public, the media has accessed a clinching document proving that UPA’s Defence Minister AK Antony himself had denied the divulging of information on the purchase of a “range of missiles from Israel” in October 2007.

While Rahul Gandhi criticized Prime Minister Modi today for keeping the details of the Rafale Defence Deal “secret”, it was exactly on those grounds that A.K. Antony refused to answer then- CPI (M) MP. 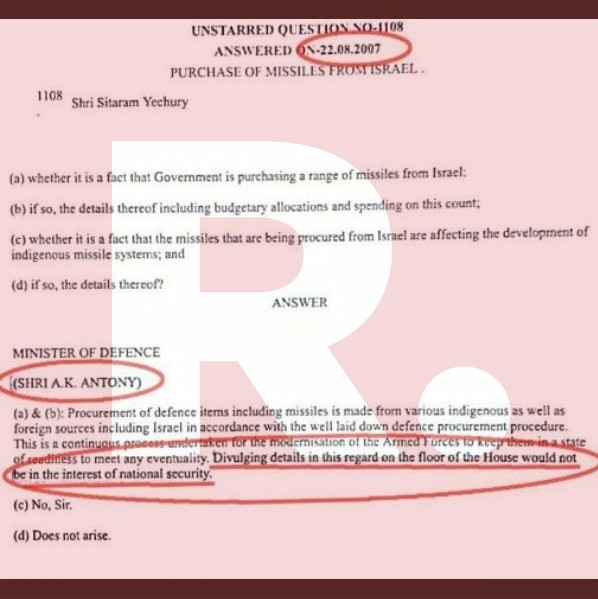 Look at the lack of confidence and fear on his face. Dishonesty, lies, manipulation is in Congress blood… as common people even we understand that certain things in Defence is confidential information… It’s a no brainer…WE TRUST MODI MR. RAGA… U will never win, said a tweet in response.

Now, let us ask Rahul a question and let him answer it immediately. In the year 2012, the government had denied to reveal the information on Rahul’s foreign trips. Why was this kept as a secret? Why was his expenses intentionally hidden? Why Sonia’s Gandhi’s foreign trip details were stopped from being revealed?

The controversy had raged on about Sonia Gandhi’s foreign travels, a leading academic in the national capital has said that her efforts to get details of Rahul Gandhi’s trips have also met with deep silence. Previously, Priyanka Gandhi had also requested the Himachal government to keep her property details a secret, “so that her life is not at risk”!

On a serious note, Gandhi family enjoys vacations several times a year, if they reveal all of that, it will surely create a negative impact (which already is negative) on the voters. On one hand, where the BJP government claims to work tirelessly each day without a holiday for about a decade and half, Sonia Gandhi is well aware and she’s smart enough to acknowledge that if their luxurious holidays becomes a trending topic, there’s no way they can come back from Italy again.

Top Secret
(Not for Distribution)

RM says the price negotiated for each RAFALE jet by the PM and his "reliable" buddy is a state secret.

Action Points
1.Informing Parliament about the price is a national security threat
2.Brand all who ask, Anti National#TheGreatRafaleMystery