The life story of Durga..

The God Father of the Bhartiya Janata Party (BJP) is just a memory now. The man who built and brought up BJP with mere numbers is present among us with his left back memories. The places he visited are added to history now. The events attended, states visited are all now History with date attached along with them.

The former PM was indeed Child-like at heart..

D.H Subbanna, a businessman from Shivamogga city and a member of the RSS Organisation who had close ties with the former PM describes the latter as a thorough gentleman who used to mingle with the masses with ease. These words indeed prove that Vajpayee was a leader of the masses.

“Mr. Vajpayee was impressed with the beauty of the falls. He requested me to take him down to the bottom of the waterfall. There were no concrete steps then. We began climbing down the waterfall at 9 a.m. and reached the bottom by 11 a.m. He was in an ecstatic mood there and said that, he would write a poem to appreciate the beauty of the water falls. Mr. Vajpayee also crooned some Hindi songs there. As I don’t know Hindi, I could not understand what he said,” Mr. Subbanna said. When Mr. Subbanna went to New Delhi in 1972 for some personal work, he rang up Mr. Vajpayee. “When I introduced myself as Subbanna from Shivamogga, Mr. Vajpayee said: I remember you, mere Jog Fallske saathi ,” he recalls.

In 1978, when Mr. Vajpayee was Minister for External Affairs, he again visited Shivamogga. “As per the protocol, arrangements were made for his stay at the Government inspection bungalow. Mr. Vajpayee told his security personnel that he would stay in my house. He relished the chapathi, palyam made from potato, rice and rasam served for dinner at our house,” he said. 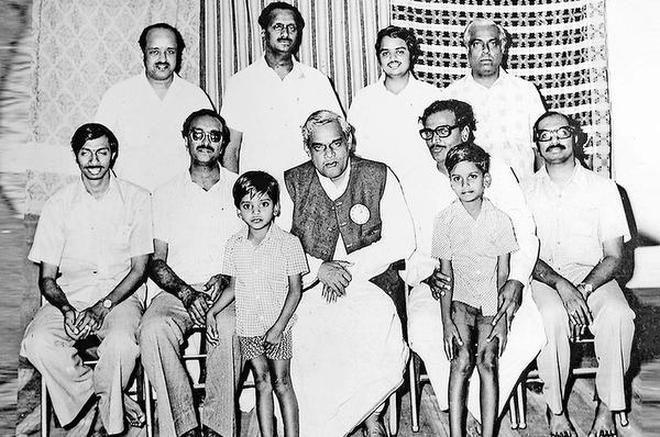 What a Simple Man he was…

His younger brother, D H Shankaramurthy-a state leader most closely associated with Vajpayee was the former Legislative Council chairman, who has known the veteran leader for more than five decades, remembers the incident when Vajpayee visited Shivamogga fr the then Jan Sangh Convention in 1966.

He also recalls a memory when he and Vajpayee were on an election campaign in Belagavi in 1983 and due to the hectic schedule, they were forced to skip lunch that day.

When they arrived at the Belagavi guest house at night, dinner service had closed. Vajpayee said he was famished. Shankaramurthy said he went to the kitchen where the cook said there was just one chapati left. “I rolled the chapati in a newspaper and offered it to Vajpayeeji. He asked me whether I had dinner and when I said no, he cut the chapati into two halves and offered one to me,” Shankaramurthy said.

Though, the above incidents contribute a little part to the huge life history of the former PM, they narrate the kind of personality he portrayed in huge. The down to earth personality, a humble human being and the poet heart got him the recognition in huge among the masses. He indeed connected to people at ground level.