Your respect towards former PM Atal Ji will increase after knowing why he had touched a woman’s feet who..

Your respect towards former PM..

Former Prime Minister of India Atal Bihari Vajpayee, the Bharat Ratna awardee, passed away today at 05:05 PM  in the AIIMS hospital at the age of 93 years. He has been suffering from kidney related ailments since 2009. He was admitted to AIIMS, New Delhi, 67 days ago.

Today the nation has lost a man who led the Indian Army during the 1999 Kargil war and helped India clinch a victory from the mouth of defeat. He was the leader who made India a nuclear power with the successful testing of Pokhran missiles, that too without the knowledge of United States of America.

Extremely sad to hear of the passing of Shri Atal Bihari Vajpayee, our former Prime Minister and a true Indian statesman. His leadership, foresight, maturity and eloquence put him in a league of his own. Atalji, the Gentle Giant, will be missed by one and all #PresidentKovind

India grieves the demise of our beloved Atal Ji.

His passing away marks the end of an era. He lived for the nation and served it assiduously for decades. My thoughts are with his family, BJP Karyakartas and millions of admirers in this hour of sadness. Om Shanti.

Atal Bihari Vajpayee Ji, was not in a good state of health since a decade but this time his condition had worsened. In June 2018, it was reported that Vajpayee ji was suffering from a lower respiratory tract infection and kidney-related ailments.

Below is the “press release” by AIIMS:

It is with profound grief that we inform about the sad demise of Former Prime Minister of India, Shri Atal Bihari Vajpayee at 05:05 PM on 16.08.2018.

Shri Vajpayee was admitted in AIIMS on 11.06.2018 and was stable in the last 9 weeks under the care of a team of AIIMS doctors.

Unfortunately, his condition deteriorated over the last 36 hours and he put on life support systems. Despite the best of efforts, we have lost him today.

We join the Nation in deeply mourning this great loss. 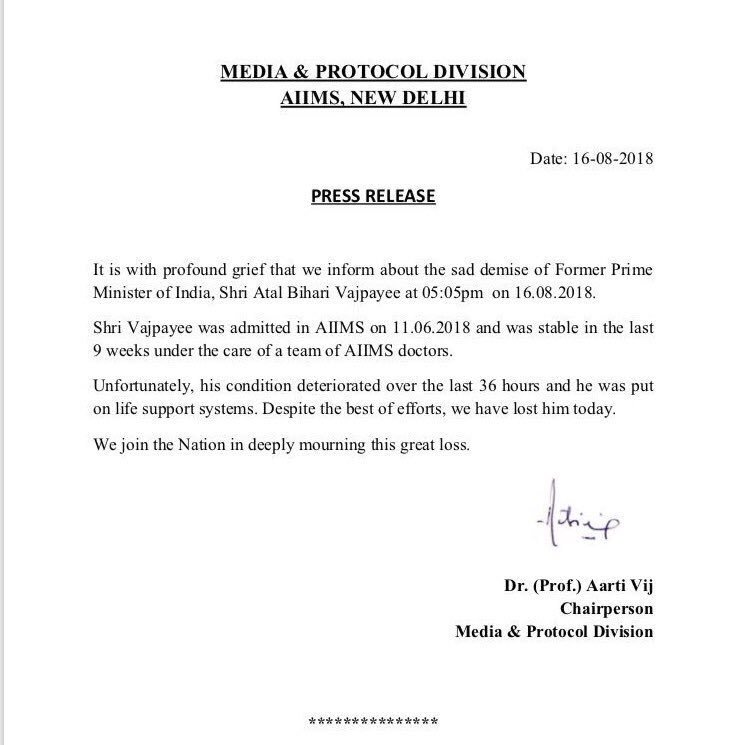 The last press release from the AIIMS had stated “Former Prime Minister Shri Atal Bihari Vajpayee’s condition continues to be the same. He is crtical and is on life support systems”.

The nation will always remember the torch bearer of democracy who had once said “this is the first national executive meeting of the Bharatiya Janata Party (BJP) and I have been unanimously chosen as the president of this executive. May God give me the strength and courage to shoulder this responsibility. The position of the president of the BJP is not an ornament, it is not a position, but a responsibility. It is not an honour, but a test. It is not glory, but challenge” in 1980.