In a shocking incident, Mamata..

Governments have money for Haj..

The Congress party was in an illusion that it could corner the Modi government over the Rafale Deal after it heard the statement given by the former president of France François Hollande who said “We did not have a say in that. The Indian government proposed this service group and Dassault negotiated with Ambani. We did not have a choice, we took the interlocutor we were given”.

So he claimed that French aviation company was not given a chance to select a partner in India in the Rafale deal but had to listen to the Modi government and opt Anil Ambani’s company as a partner in the deal. This statement proved like a “bottle of water in the desert” to the perishing Rahul Gandhi and his team.

Soon Rahul Gandhi gave out a statement saying “The PM personally negotiated & changed the Rafale deal behind closed doors. Thanks to François Hollande, we now know he personally delivered a deal worth billions of dollars to a bankrupt Anil Ambani. The PM has betrayed India. He has dishonoured the blood of our soldiers”.

The French government and the French company expose the lies of François Hollande and Rahul Gandhi:

The French government released a statement and clarified that the French company involved in the Rafale deal had full freedom of select its partners in India. This makes it clear that the Modi government didn’t lobby in favour of Anil Ambani’s company.

Here’s the statement by the French spokesperson of the Ministry of Europe and Foreign Affairs:

The intergovernmental agreement signed on 23rd September 2016 between the French and Indian governments for supplying India with 36 Rafale aircraft concerns the obligations of the French government solely with regard to ensuring the delivery and quality of this equipment.

The French government is in no manner involved in the choice of Indian industrial partners who have been, are being, or will be selected by French companies. In accordance with India’s acquisition procedure, French companies have the full freedom to choose the Indian partner companies that they consider to be the most relevant, then present for the Indian government’s approval the offsets projects that they wish to execute in India with these local partners so as to fulfil their obligations in this regard.

As it happens, agreements have already been signed by French companies with many Indian firms, both public and private, under the framework of Indian laws.

Even the Dassault Aviation exposed the lies spread on Rafale deal by Rahul Gandhi:

Yes, after the French Government released a statement on Rafale controversy saying French companies have full freedom to choose their Indian partners, the Dassault Aviation also repeated the same statement and thus exposed the lies of Rahul Gandhi.

Dassault Aviation, the French aeronautics company in its press statement said “In accordance with the policy of Make in India, Dassault Aviation has decided to make a partnership with India’s Reliance Group”. 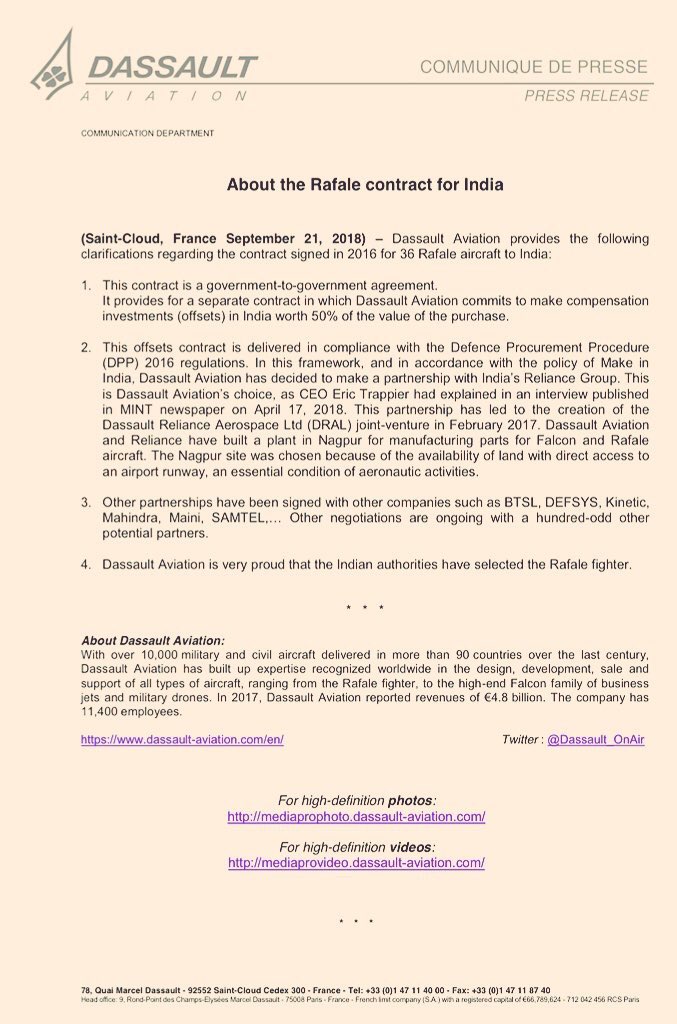 The Defence Ministry also clarifies on the lies of Rahul Gandhi:

The minstry said “The report referring to former French president Mr Hollande’s statement that Government of India insisted upon a particular firm as offset partner for the Dassault Aviation in Rafale is being verified. It is reiterated that neither Government of India nor French Govt had any say in the commercial decision”.

Days ago Congress party called Former French president Mr Hollande a corrupt man but today he is being praised:

On 31st August, Rahul Gandhi’s party said that the former French president Mr Hollande was a part of Rafale deal’s (imaginary) scam. But today, Rahul Gandhi is shamelessly embracing the lies of another liar named Hollande.

Have a look at the below pictures:

Hollande gave the statement as he was under pressure to rebut the charges pic.twitter.com/iKljALrPYR

India will soon be free of poor as UN report says Poverty Rate in India reduced to half over 10-year period!