So that the biased media won’t call it a “Fake Encounter”, Yogi Govt called the media to Live Telecast..

So that the biased media..

Looting temple money has become a big business for most of the politicians since decades. The Hindu temples which receive crores of money from devotees is being misused for political gimmicks. While the temple money is meant exclusively for temple renovation, restoration and for salary of priests, the politicians are using this money to fund Haj trips and missionary development.

The sad part here is, the priests in the temples who have dedicated their entire life have been leading a life of misery. Priests of those temples which come under the Muzrai Development have been neglected to the core. In a pathetic situation these priests are given a salary of Rs 750-1000/ month. The salary they receive is not sufficient for one week’s expenses and the government expects them to lead their life with this amount.

Periya Nambi Narasimha Gopalan, the head priest at Sri Rajagopalaswamy Kulasekara Azhwar Temple, Mannar Kovil, Ambasamudram taluk and the 29th descendant of Acharya Periya Nambi, had filed a writ petition at the Madurai Bench of the Madras High Court regarding the plight of priests in temples. Narasimha Gopalan said that the time he filed the writ petition he was getting a salary of Rs 750 a month which got increased from Rs 250/month for almost a decade.  His father performed service at the temple in the 1980s at a salary of just Rs. 55 a month. There are six other full-time service personnel at the temple, each of whom gets a three-figure salary.

Narasimha Gopalan has put together data on the salary paid to priests and other temple service personnel in close to 50 ancient temples in the Ambasamudram region. He cites a couplet from Tirukural: Aa payan kunrum aruthozhilor nool marappar kaavalan kavaan Enin — If the ruler does not take care of his subjects and does not give them their fair dues, the cow count will decrease and the Brahmins whose job it is to chant and teach the Vedas will take up other jobs (The Hindu). 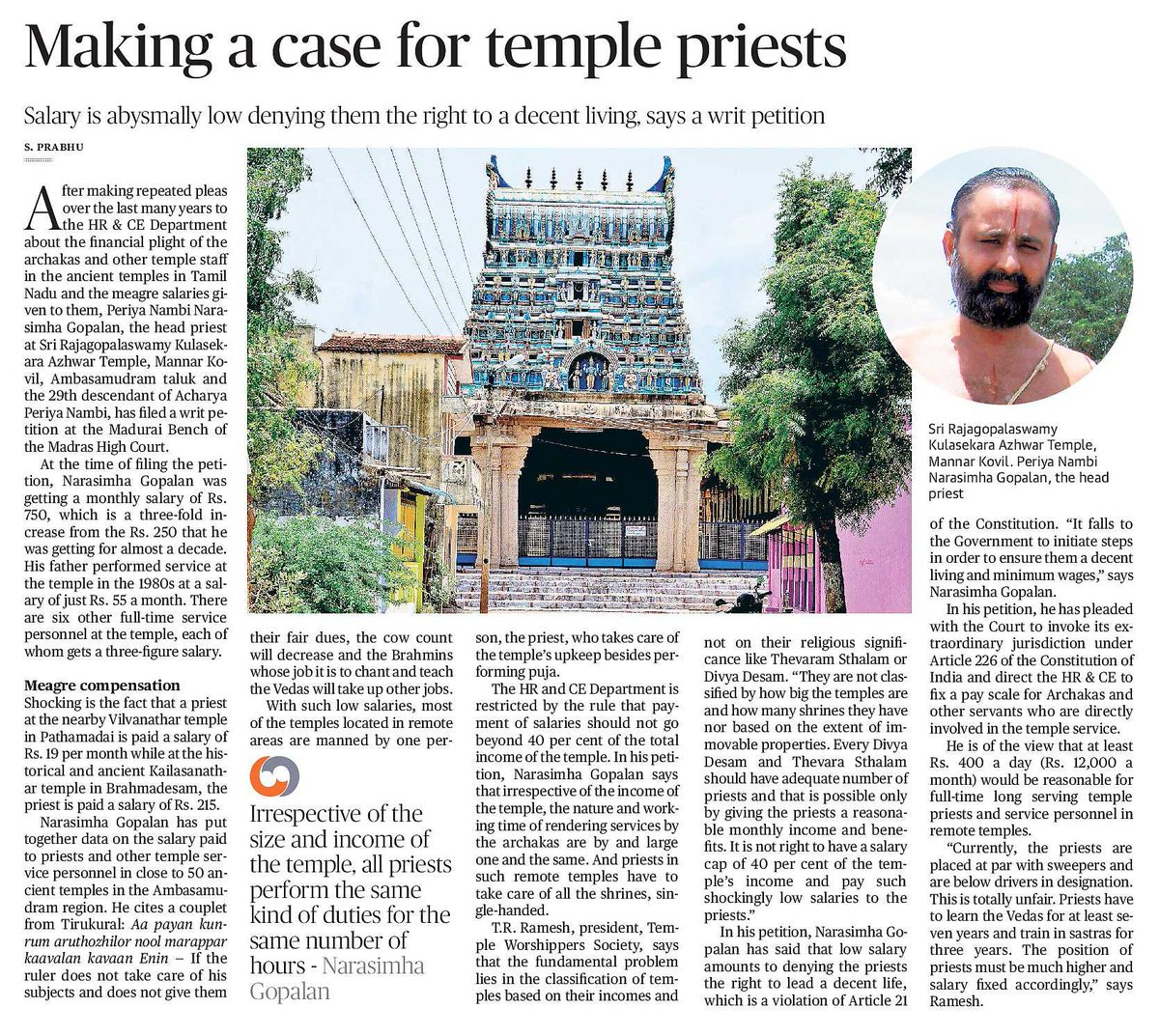 The priests had earlier made appeals to the HR and CE Department requesting them to fix a decent salary to the priests working in the temple. However the department made no effort to increase the salary and continued to treat priests as beggars.

The HR and CE Department is restricted by the rule that payment of salaries should not go beyond 40 per cent of the total income of the temple. In his petition, Narasimha Gopalan says that irrespective of the income of the temple, the nature and working time of rendering services by the archakas are by and large one and the same. And priests in such remote temples have to take care of all the shrines, single-handed.

T.R. Ramesh, president, Temple Worshippers Society, says that the fundamental problem lies in the classification of temples based on their incomes and not on their religious significance like Thevaram Sthalam or Divya Desam. “They are not classified by how big the temples are and how many shrines they have nor based on the extent of immovable properties. Every Divya Desam and Thevara Sthalam should have adequate number of priests and that is possible only by giving the priests a reasonable monthly income and benefits. It is not right to have a salary cap of 40 per cent of the temple’s income and pay such shockingly low salaries to the priests.” (The Hindu).

Narasimha Gopalan in his petition  had said that low salary amounts to denying the priests the right to lead a decent life, which is a violation of Article 21 of the Constitution. “It falls to the Government to initiate steps in order to ensure them a decent living and minimum wages,” says Narasimha Gopalan.He had requested theCourt to invoke its extraordinary jurisdiction under Article 226 of the Constitution of India and direct the HR & CE to fix a pay scale for Archakas and other servants who are directly involved in the temple service. (The Hindu).

“Currently, the priests are placed at par with sweepers and are below drivers in designation. This is totally unfair. Priests have to learn the Vedas for at least seven years and train in sastras for three years. The position of priests must be much higher and salary fixed accordingly,” says Ramesh.

The priests spend their life learning Vedas and mantras to serve in the temple. But their knowledge is treated as useless by our society. These people do not get jobs anywhere as they would have sacrificed their life to learn only Vedas. But denying them rights in temple, the government has literally made their life miserable.

The government which spends crores of money to give freebies to minorities has no money to give salary to temple priests. They have money to play political gimmicks, create riots, violence and strikes but have no money for these helpless people.

The habit of seeing temple as piggy banks and temple loot must end. The government should stop taking temple control and hand over all Hindu temples to trust.

To teach the government a lesson, people should donate money to the priests and not put money in HUNDI, if the temple comes under Muzrai department.

So that the biased media won't call it a "Fake Encounter", Yogi Govt called the media to Live Telecast the encounter, then encountered 2 murderers who killed Hindu priests Lord Ram is ancestor of not just Hindus but Muslims as well: Yoga Guru Baba Ramdev