The end of Goonda Raj!..

Mother India has always stood proudly with the bravery of her brave sons and daughters who have kept up the name of Indian soil. Rajput warriors have been a pride of India, protecting our nation since decades and these warriors have proved their bravery time and again.

One who braves any situation is a “Rajput”! The one who accepts all challenges and emerges victorious is a “Rajput”! One who never gives up but fights the enemy till his last breath is a “Rajput”. Even the Rajput women are equally brave warriors just as the Rajput men. Today, I am gonna tell you about such a Royal Rajput family which is literally ruling Pakistan. India’s neighboring enemy country has got the waves of fear of this Rajput family residing there since ages.

The whole Pakistan has got a fear of this Rajput family, and this fear is not from today but even before the Mughals invasion. The Rajput’s have proved their bravery giving a tough fight to the Mughals and defeated them many times. This trend is being taken forward by a Rajput family in Pakistan even today.

“Rana Hamir Singhji Sodha”, is a Rajput belonging to the Umerkot dynasty Rajput Parivar (family). He is the successor to the former Hindu ruler of Umerkot, the late Rana Chander Singh Sodha. The 53-year-old Hamir Singh, son of the late ruler who passed away in August 2009 and the scion of the Sodha-Parmar clan, was a political person. He held the portfolios of Science and Technology and Agriculture as Minister during the second tenure of the late Pakistan Prime Minister Benazir Bhutto. 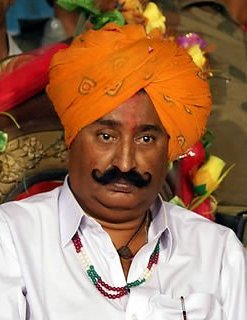 He is a popular figure among the people of the border districts as he was a three times MLA. He had also worked as the deputy Nizam of Umerkot. In 1990 he left the People’s party and formed his own political party, the Pakistan Hindu Party (PHP). He himself designed for his party a saffron flag bearing two ancient logos –OM and Trishool.

Rana Hamir Singh, the only Hindu Ruler in Pakistan lives his life as a “Royal Tiger”. There exists no man in Pakistan who could stand up against Rana Ji till date. His bravery is such that once he had even given an open challenge to PM of Pakistan for an open War.

Listen to these words by Rana Hamir Singh which will surely give you goosebumps. What a befitting reply to Pakistan!! He says he’s not a traitor, not a robber or smuggler, he has not played with the government’s money and he is not into any form of illegal business that he needs to be scared of Pakistan which threatens him constantly. He declares that Pakistan cannot threaten him in the name of religion as Rajput blood cannot be threatened by anyone.

With a saffron turban on his head and Tika on his forehead, Rana Hamir Singh is ruling over Sindh, which is also known as “Dhata” in Pakistan. He still maintains his links with India, especially Rajasthan, the home of many of his people, “the Sodha Rajputs”.

After his father’s death in 2009, Rana Hamir Singh Sodha being the eldest son was anointed in Pakistan as his successor. A large number of Hindus and the predominant Sindhi Muslim population of Tharparkar, Umerkot and Mithi -places not far from the Indo- Pakistan border joined the stately procession of Hamir Singh, who was crowned as Rana of Rajputs.

“His coronation, held at the playground of Govt. Boys’ High School, drew a large number of elders from the community and the local elite. People belonging to different faiths turned up to watch the event. The ceremony began with the entry into Mithi of a convoy of hundreds of vehicles from Rana Jagir (Rana’s native village near Umerkot). When the caravan stopped at the old Naka (checkpoint), two girls sang aarti in praise of a deity during which worshipers held a platter containing incense”

The coronation ceremony was a gala event, which for any Indian onlooker would have resembled the crowning of a Rajasthani prince. Umerkot is only 40 km from Khokrapar, the first railway station in Pakistan if one enters from Rajasthan’s Barmer district.

Hindus are unsafe in spite of being in India. Every minute there is a threat hanging on their heads from the Pakistan based terrorists. Every day, several Indian citizens and army men are killed by the Pakistani butchers. Rana Hamir Singh Ji is a role model to every Indian on how to face the Pakistanis bravely and make them realize “India is indeed a country of brave hearts”.

Rana Hamir Singh and his family have always worked for the upliftment of Pakistani Hindus. They have always stood for the truth and never been a part of Pakistani conspiracy against India. But due to the negligence of Pakistani government, most of the Hindu has left this area. Pervez Musharraf had once tried to gun down this family but he failed at it.

A Salute to “Rajput Hindu Tiger” of Pakistan!