Breaking!!! Nitish Kumar tightens his position; For the greed of power will Lalu sack his own son?

Disgusting!!! Aslam Khan from Delhi arrested for raping and killing a pregnant dog

No Wikipedia will tell you this! The biggest and the most brutal Genocide was not ‘The Holocaust’ a state-organized barbaric murders of 6 Million Jews by Adolf Hitler! The biggest Genocide was caused by the British most indifferently and cold-bloodedly ….The ‘Deaths of 29 Million Indians due to starvation ’! One might think how the British can be responsible for the deaths caused by a Famine through a natural calamity! Read to know the shocking and heart-wrenching truth behind these deaths!

We all know that British loathed Indians as if they were disgusting worms. The British Gold-diggers had squeezed India dry for a century and half. Towards the end of their regime, they had become even more careless about the governance of the country. Moreover, they were neck-deep into the Second World War. That was the unfortunate time of a breaking of a Famine in Undivided Bengal. This Bengal Famine of 1943 claimed 4 Million lives.  All over India, around 29 Million people died of starvation during these Famine times. And these deaths could have been avoided, if only British had thought Indians as Humans!

And who was that evil man who snatched food from the hungry mouths of millions of starving Indians? Winston Churchill, of course. During these crucial times, Churchill was the Prime Minister of the United Kingdom. Let me first tell you what Churchill thought of Indians. His statement to the Secretary of State of India about his opinion about Indians was historical…. “I hate Indians. They are beastly people with a beastly religion. Famine was their fault. Who told them to breed like rabbits?” I’m sure the people of the United Kingdom are ashamed of this inhuman statement of their Ex-Prime Minister for millions of dying people. As far as Indians are concerned, they are never going to forget or forgive this beastly statement!

Coming back to the famine, the prominent contributors were the regional Natural Disasters- Rice crop diseases due to tidal waves, floods, cyclones and storm surges. Inflation was on its high as the consequences of war. At these opportune times, Japan captured Burma, the biggest exporter of rice. The scarcity of market supplies resulted into heavy hoardings thereby shooting the prices of rice and other grains. Farming being the occupation of 75% of Bengalis, poverty and scarcity had hit the state. The very next year that is in 1944 rice harvest yielded extremely good crop, thereby ending the famine. But alas! Starved till their last drop of blood had dried within them, the Millions of Indians died slow painful deaths before 1944!

If only, Winston Churchill had considered these ‘beastly Indians’ as humans! Churchill ordered to divert the Indian food supplies to the well-fed British soldiers in the places like Europe, Greece and Yugoslavia. The food supplies were prioritized by him for the already well-supplied Military, Defence forces, Civil servants and laborers in military industries. The food supply was brutally cut to the rural poor. War Cabinet of Great Britain denied the access to the International sources due to the ongoing war. The height of selfishness was exhibited by Churchill when grains were exported to Sri Lanka from India during such famine times. Sri Lanka was faring quite well compared to India. Inspite of knowing that his policies and orders would result in millions of deaths due to starvation, Churchill was unperturbed. As per Churchill, starvation distracted Indians from fighting for the independence of India.

When Churchill was informed about the millions of dying Indians, he ill-humoredly inquired to the Government in Delhi whether Gandhi had died yet! The wheat supplies from Australia passed through the streets littered with skeleton-like dead bodies for Mediterranean and Balkan countries. America and Canada offered to supply food, but Churchill turned down the offers. The atrocious behavior of Churchill even repulsed the British officers working in India. As per Lord Wavell, the Viceroy of India during those calamitous times, the attitude of Churchill Government towards India was “Negligent, hostile and contemptuous’! 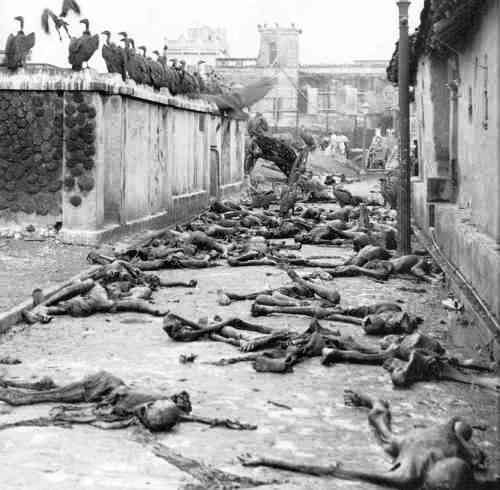 Tell me if I’m wrong in calling this a man-made disaster. Tell me if I’m wrong in calling Churchill a Mass Murderer. Today, the British PM David Cameron expresses regret over the Jalianwala Bagh Massacre conducted in 1919 by his country-men. But the most giant sin of allowing millions of Indians to die through starvation by snatching their rightful food never gets mentioned anywhere. The history grants glories to Churchill in spite of the blemish of the blood of millions of Indians on him. The reason for such heavy omissions is that Churchill wrote the History himself and even got a Nobel Prize for the same!

The people of United Kingdom need to realize the magnitude of the sins of their ancestors. Today India has moved on! It is the fasted growing economy in the world. Indians are par excellence in the various fields across the globe. Now PM of India is welcomed in the UK with a red carpet treatment. India has earned the respect from the British who once treated Indians like gutter worms.

In 2002, in a BBC Poll of ‘100 greatest Britons’, the Mass Murderer Winston Churchill was proclaimed to be ‘The greatest of them all’ based on a million votes from BBC viewers.  It is high time the Briton people know the real harsh facts about their savage, inhuman and barbaric leader they voted the ‘Greatest of them all’!