No freedom of speech for Nationalists? Influential handles on Facebook getting targeted on daily basis!

Why did PM Modi make a phone call to Rahul Gandhi? After knowing the reason, even the Congress karyakarthas..

No freedom of speech for..

Why did PM Modi make..

Puducherry Lieutenant Governor, Kiran Bedi has ordered to stop the distribution of free rice to the poor, from 31st of May onwards if their villages fail to access a Clean Certificate from the government to prove that they are free from open-defecation and garbage.

In the latest of her efforts to ensure ‘Swachh Bharat’, Bedi has written a letter to Puducherry Chief Minister V Narayanasamy stating that though community leaders are “vociferous and proactive in raising various issues”, a similar enthusiasm is not shown in practising cleanliness campaigns.

In a letter to Puducherry CM V Narayanasamy, Bedi had written that this move would “inculcate a sense of responsibility/duty among people and to hasten objective of Swachh Grameen Union Territory”. Bedi, who was on 155th week end visit, had gone to Mannadipet Village and was seen shocked at the poor sanitation condition in the region. Later, videos of her instructing officials to act quickly surfaced. Following her visit, Bedi sent out the order.

Free Rice reaches out to more than half d population primarily in rural areas.

This is d [the] learning of morning round today,”.

“Distribution of free rice to the villagers should be conditional to the certification of the village being open defecation free and free of strewn garbage and plastics,” she said. However, the new decision will be implemented from June, even as she gave a deadline of four weeks to concerned authorities and villagers to keep their surroundings clean.

A joint certification given by the local MLA and the Commune panchayat commissioner should be submitted to the Civil Supplies Commissioner, the former IPS officer said, adding that the scheme would be kept on hold till then. She gave a May 31st deadline to the authorities to ensure the hamlets are made open defecation free and garbage free.

Bedi said that for the last two years, no local representatives or officials of the departments concerned had made a determined bid to make rural Puducherry clean within a time frame. Under the free rice scheme, families coming under below poverty line are entitled to get 20 kg rice every month while those with yellow cards in the Above Poverty line category are entitled 10 kg rice.

Ever since she became Lt Governor in May 2016, Bedi and the Congress government have been at loggerheads over various issues, including her style of functioning, the swearing-in of three MLA’s and medical admissions, among others. The Madras high court had upheld the appointment of the three BJP functionaries of the Puducherry unit as nominated members of the House.

Though this move was mistaken by the people, Bedi came under fire for making the statement, and people misappropriated what she was trying to convey through her move. Later, Bedi had to come forward to retract her earlier statement and say that it had been misread and people have misunderstood her.

“In view of misreading of my intent to improve the living conditions of rural poor, and in view of assured commitment that rural areas will be open defecation free by June 2018, I have clarified my earlier communications to put at rest any misgivings…” Bedi tweeted later today. 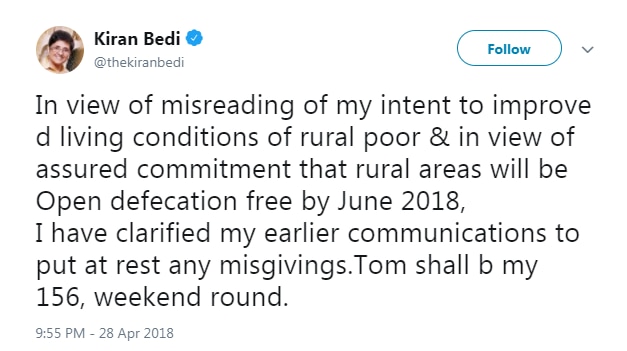