“I am English by education, a Muslim by culture, just born as a Hindu by accident,” said Jawaharlal Nehru..

Why this “Pakistani agent” is..

“I am English by education,..

The Bangalore assault case which shocked the state is taking new dimensions every day with Congress leaders trying their best to bury the case. Vidvat who was brutally assaulted by Congress MLA son Mohammed Haris was admitted to hospital last week where he is undergoing treatment. The condition of Vidvat is said to be critical and there are chances that he may be shifted to Singapore for further treatment.

However on the other hand, the Congress leaders who have faced massive embarrassment after the assault have been queuing up to meet Vidvat’s father Lokanathan trying him to convince him to withdraw the case against Mohammed Haris. Since 3 days, the Karnataka Home Minister, DGP and many other prominent people tried to convince Vidavat’s father, but Lokanathan was very firm in his decision and did not show any signs of compromise. Few movie actors and their family members had also visited the hospital to inquire about Vidvat’s health. But the insiders are now telling that the Congress is trying to pressurize Vidvat’s family by all means. 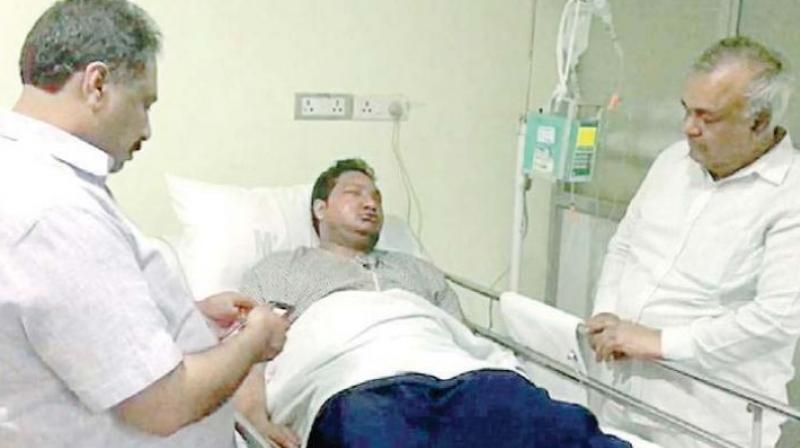 The fear for Congress is that the public sentiment has turned against them just before elections which may badly effect their seat tally. The repeated goonda acts in the state had already dented the Congress image, but now the brutal assault by politician son has made people believe that Congress has given free hand to goondas and rowdy elements in the state.

Just after Vidvat’s episode sparked row in Karnataka, 3 more incidents occurred within a span of 2-3 days where the Congress leaders were seen assaulting BJP worker and another congress leader threatening to burn the entire BBMP office with petrol. These incidents have really shaken the people of Karnataka and are strongly demanding the arrest of these goons who have gone out of control.

Much worried by the development, today the Chief Minister has invited Vidvat’s father Lokanathan to his residence and reportedly pressurized to withdraw case against Mohammed Haris. When Lokanathan did not budge, the Chief Minister has insisted him not to oppose bail to Mohammed Haris. This development happened on Thursday night after the legislature session. But Lokanathan has again reiterated that the assault on his son was not a small issue as he is still not able to recover and clearly rejected any talks with the Congress party or its members. Mr Loganathan reportedly told Mr Siddaramaiah that he was not interested in giving a political twist to the case and was not keen on joining hands with any political party on the issue. He reportedly firmly told Mr Siddaramaiah that he would not compromise on his son’s future including fighting the case.This has caused a major embarrassment to Siddaramaiah.

According to internal reports, the party high command had instructed CM Siddaramaiah to sort out issues with Lokanathan before Rahul Gandhi arrives in Karnataka on Saturday. The party is much worried that Rahul Gandhi will face questions during his Karnataka visit which will cause major embarrassment to Congress.

It is definitely good that Lokanathan has rejected all talks with Congress which is trying to protect criminals like Mohammed Haris and his goons. These politicians have no fear of law and want to use the courts and judiciary for their convenience. If such goons are let free, they will be back on streets within hours and will continue their criminal acts by abusing and threatening people. The courts should set right precedent and throw these goons to jail without showing any mercy.

Why this "Pakistani agent" is secretly entering into Rahul Gandhi's office? Congress is completely nailed after this video surfaced!

“I am English by education, a Muslim by culture, just born as a Hindu by accident,” said Jawaharlal Nehru and we voted for his dynasty for so long!