Devi Kalaratri, who ended terror of Rakshasa! The most fear inducing form of Shakti worshipped on 7th day of..

This Durgashtami, let us know..

On this Auspicious beginning of the occasion of “Navratri”, each Indian and the Indians all over the world are worshiping the 9 Goddesses (Shailaputri, Brahmacharini, Chandraghanta, Kushmanda, Skandamata, Katyayini, Kalaratri, Mahagauri, Siddhidaatri). Each of them have their own significance and epic tale to be in existence and to be worshiped.  While these 9 auspicious days, we remember each of the Goddess and talk about their appearance and tales.

One most fearful Goddess among them is “Goddess Kali”.She is a fearful form of Maa Durga, who is a form of Shakti; the Divine feminine energy of the Universe. Kali is the Goddess of time, destruction of evil and holds the Shakti of the Universe. She is revered by mortals, demons and Gods alike who are afraid of facing her wrath. She is an ancient deity, older than time itself and can bring an end to all evil in the Universe.

Goddess Kali is depicted wearing a garland of human skulls and a skirt of human hands around her waist. She holds the head of Raktabija in her left hand and in her right hands she holds the Trishul and a bloody sword. She is seen standing atop the body of her consort Lord Shiva and her Red Tongue filled with blood is out.

Rakta Bija and his encounter with Goddess Kali..

A demon named Raktabija was wreaking havoc on earth. This demon had a special boon that if his blood fell on the ground, each drop of it would manifest as a clone of himself giving birth to another Rakta Bija.

Goddess Durga along with the Matrikas wounded Raktabija severely but could not kill him. The more they made him bleed, the more Raktabijas were born. Then Goddess Durga summoned Maa Kali, a scary manifestation of herself in order to end the terror of Raktabija. Maa Kali extends her tongue and laps up all the blood from the battlefield and swallows the duplicates of Raktabija.

Then she attacked the real Raktabija with her sharp fangs and sucked out all the blood from his body until he died. Kali also killed all other demons and this proved her dominance over the forces of evil.

In a desperation, Kali was summoned. Kali is supposed to be another avatar of Hindu Goddess Durga. Kali went on a killing spree and a full-on a rampage. She was ruthless and fearless in killing the demons. However, even after all the demons were killed, Kali’s anger did not subside. She was the most tangible form of destruction.
The Gods became concerned as to how to stop Kali. Then they went to Lord Shiva and asked him to do something about it. 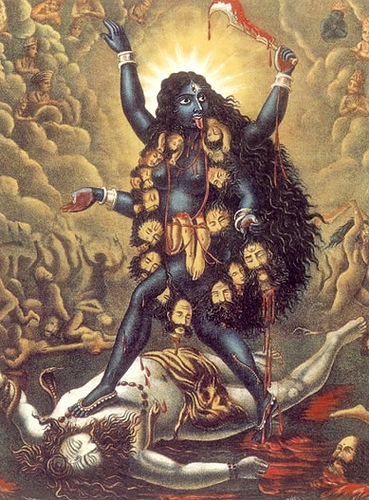 Lord Shiva hatched a plan. He took the form of a big log of wood and was lying down on the road. So far everything Kali was setting foot on was getting destroyed. But the wooden log would remain the same and this made Kali re-check things. At that very moment, Shiva came back to his form.

Kali realized that she had stepped on Lord Shiva himself, which was a Big mistake according to Hindu thought. You just never step onto anybody, if you do, then you apologize because God is supposed to be there in every human being and putting your foot on them means you are being rude/disrespectful towards God.

When Kali realized her mistake, she put out her tongue in Embarrassment (this is a common body language in India too) and stopped right there. This is how Kali was stopped from her killing spree. PM Modi turns emotional as his most beloved guru who made him join politics passes away!