What makes Vijaya Stambha, which was commissioned by the ruler of Mewar who never lost any war, so special?

What makes Vijaya Stambha, which..

India has had the privilege of having many brave sons and daughters as its rulers. Unfortunately, not many are known to us because leftist historians have not just distorted history but left out brave Hindu warriors and their feats that have the potential to inspire the present and future generations. It is our duty to bring out the story of such forgotten heroes and heroines into the limelight.

Durga stands for “unattainable”. Durga is the Hindu warrior goddess, the fierce, twelve-armed, three-eyed form of the wife of Shiva. The name itself has the fear in it. Indian women are equated to be Kaali and Durga.

The status of women in India has been subject to many great changes over the past few millennia. With a decline in their status from the ancient to medieval times, to the promotion of equal rights by many reformers, their history has been eventful. In modern India, women have held high offices including that of the President, Prime Minister, Speaker of the Lok Sabha, Leader of the Opposition, Union Ministers, Chief Ministers and Governors.

Not just kings but queens of this land have also etched a name for themselves as both brave warriors and administrators. Bharatvarsh has produced brave hearts such as Chennamma, Ahilya Bai Holkar, Rani Laxmi Bai and many other illustrious queens who have not just defied authority and made a name for themselves but also proved to be able administrators. One among such illustrations queens is “Maharani Durgavati”. 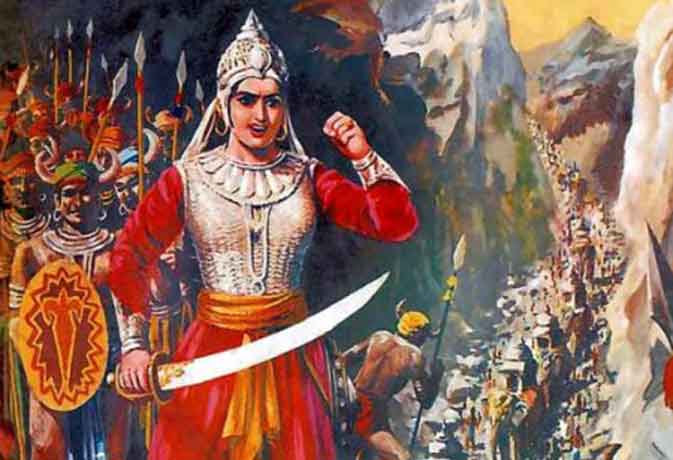 Born in the Chandel dynasty and married into the Gond dynasty. She ruled Gondwana from 1550 to 1564. The only child of Chandel Rajput Emperor Keerti Singh, Durgavati was born on the day of Durgashtami in 1524 at the Kalinjar Fort thus she was named “Durgavati”- justifying her name she was brave, intelligent and beautiful as well.

Rani Durgavati’s achievements further enhanced the glory of her ancestral tradition of courage and patronage of arts. In 1542, she was married to Dalpat Shah, the eldest son of king Sangram Shah of Gond Dynasty. Chandel and Gond dynasties got closer as a consequence of this marriage and that was the reason Keerat Rai got the help of Gonds and his son-in-law Dalpat Shah at the time of Muslim invasion of Sher Shah Suri in which Sher Shah died.

She gave birth to a son in 1545 A.D. who was named Vir Narayan. Dalpat Shah died in about 1550 A.D. As Vir Narayan was too young at that time, Durgavati took the reins of the Gond kingdom in her hands. Two ministers Adhar Kayastha and Man Thakur helped the Rani in looking after the administration successfully and effectively. Rani moved her capital to Chauragarh in place of Singaurgarh. It was a fort of strategic importance situated on the Satpura hill range.

It is said that trade flourished during this period. People were prosperous. Like her husband’s predecessors, she extended her territory and accomplished the political unification of Gondwana, also called Garha-Katanga, with courage, generosity and tact. Out of 23,000 villages in her kingdom 12,000 were directly managed by her government.

Her large well equipped army is said to have consisted of 20,000 cavalry and 1,000 war elephants besides a good number of foot soldiers. She carried out many useful public works in different parts of her kingdom, winning the hearts of her people. She built a great reservoir close to Jabalpur, called Ranital. Following her initiative one of her attendants built Cherital and the Adhartal was built three miles from Jabalpur by her minister Adhar Kayastha.

She distinguished herself as a warrior and fought with unvarying success against Baz Bahadur, the Sultan of Malwa. Stories of her exploits as a warrior and hunter are still current in the area.
After the death of Shershah, Sujat Khan captured the Malwa zone and was succeeded by his son Baz Bahadur in 1556 A.D. After ascending to the throne, he attacked Rani Durgavati but the attack was repulsed with heavy losses to his army. This defeat effectively silenced Baz Bahadur and the victory brought name and fame to Rani Durgavati.

In the year 1562 “Akbar” vanquished the Malwa ruler Baj Bahadur and annexed the Malwa with Mughal dominion. Consequently, the state boundary of Rani touched the Mughal kingdom.

Rani’s contemporary Mughal Subedar was Abdul Mazid Khan, an ambitious man who vanquished Ramchandra, the ruler of Rewa. The prosperity of Rani Durgavati’s state lured him and he invaded Rani’s state after taking permission from Mughal emperor. This plan of Mughal invasion was the result of expansionism and imperialism of Akbar.

To fight a defensive battle, she went to Narrai situated between a hilly range on one side and two rivers Gaur and Narmada on the other side. It was an unequal battle with trained soldiers and modern weapons in multitude on one side and a few untrained soldiers with old weapons on the other side. Her Faujdar Arjun Daswas killed in the battle and Rani decided to lead the defence herself. As the enemy entered the valley, soldiers of Rani attacked them. Both sides lost some men but Rani was victorious in this battle. She chased the Mughal army and came out of the valley.

The queen who chose death over dishonour!

At this stage, Rani reviewed her strategy with her counsellors. She wanted to attack the enemy in the night to enfeeble them but her lieutenants did not accept her suggestion. By next morning Asaf khan had summoned big guns. Rani rode on her elephant Sarman and came for the battle. Her son Vir Narayan also took part in this battle. He forced Mughal army to move back three times but at last he got wounded and had to retire to a safe place.

In the course of battle, Rani also got injured near her ear with an arrow. Another arrow pierced her neck and she lost her consciousness. On regaining consciousness she perceived that defeat was imminent. Her Mahout advised her to leave the battlefield but she refused and took out her dagger and killed herself. Her martyrdom day (24th June 1564) is even today commemorated as “Balidan Diwas”.
The place where she sacrificed herself has always been a source of inspiration for freedom fighters. In the year 1983, the Government of Madhya Pradesh renamed the University of Jabalpur as “Rani Durgavati Vishwa Vidyalaya” in her memory.

The government of India paid its tribute to the valiant Rani by issuing a postal-stamp commemorating her martyrdom, on 24th June 1988. “Don’t be an Obstructionist in Every Issue!”-Supreme Court to Kejriwal! PM Modi spearheads the Karnataka election campaign and says that he is a Kannadiga! Also makes a unique attack called “Lollipop” Attack and decimates the Congress party