Where’s the Mini-Singapore you promised? This is how Voters in Karnataka grilled the Congress workers for their “Mini- Singapore”..

Where’s the Mini-Singapore you promised?..

With Karnataka elections coming near, everybody’s heart is pounding. Along with the political parties, people of the nation are also keen to see as what would be the result of these elections and how political arena will be changed. Will these elections give more power to BJP? Will BJP be able to make their entry to South Indian politics Or Will the Congress be able to save their last bastion and get boost for upcoming 2019 elections? These questions are hovering in everyone’s mind.

The exact answer of these questions will be known on May 15, however, the ground reports and the latest surveys are predicting that BJP will easily score massive victory in the upcoming polls dismissing the earlier predictions of various surveys and opinion polls.

According to latest opinion poll conducted by the Jan Ki Bat with the sample size of a 1.2 lakh respondents, it is predicted that nobody can stop BJP from coming to power. Surely lotus will bloom in the state of Karnataka.

The opinion poll predicts that BJP will easily cross the mark of 100 seats as compared to previous assembly elections. With the extensive campaigning of Prime Minister Narendra Modi, party president Amit Shah, former Karnataka Chief Minister BS Yeddyurappa and Uttar Pradesh Chief Minister Yogi Adityanath BJP could easily win between 102-108 seats in the 224-seat assembly. Whereas the Congress party under the guidance of State Chief Minister Siddaramaiah and Congress President Rahul Gandhi will be able to grab 72-74 seats and the JD(S) could manage only 42-44 seats in the 224-seat assembly.

In 2013, BJP had bagged only 40 seats as compared to 2008 when it had won 110 seats. But this time the survey reflects a massive jump in BJP seats. According to the findings, both the Congress and the JD(S) will reduce to double digits in terms of seat counts. In 2013, the incumbent Congress government came to power with a jump from 80 to 122 seats but this time the downfall is predicted for it. 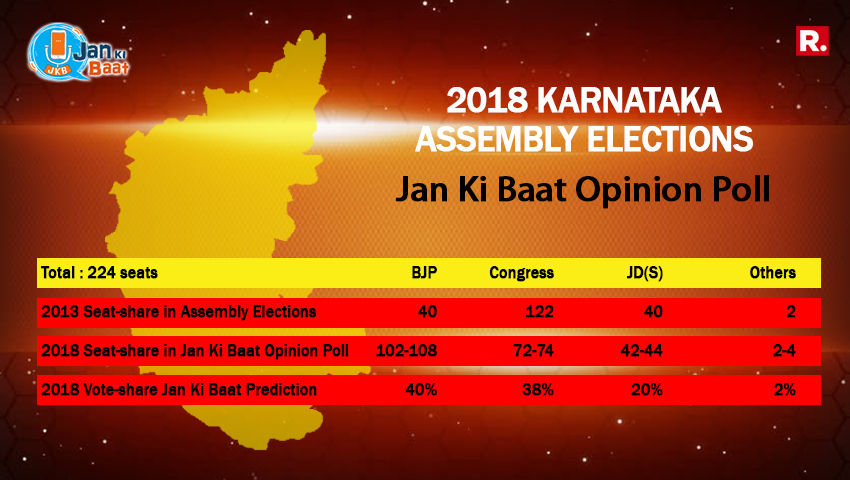 If we state in terms of percentage share, according to the opinion poll, BJP will be able to grab 40% vote share while the Congress could get 38% of the votes. The JD(S), the party which had bagged 40 seats in the previous elections, this time could end up with a vote share of 20%. The survey also predicts ‘others’ could get 2 to 4 seats with a vote share of 2 percent. In the previous elections ‘others’ were limited to two seats.

The survey pointed out that  BJP is rising and the Congress and JD(S) that are falling. Also, the ground reports are supporting the facts. The charm of Modi is still intact and people are losing faith in Congress. It can be gauged from the fact that in Chikkodi, which is a JD(S), Cong bastion, 1.5 lakh people coming to rallies of PM Modi. It all makes one thing very clear that this time, momentum is in BJP’s favor, no matter how much opposition parties deny it.

#ModiDaresRahul | If Modi isn't a factor, then in Chikkodi, which is a JD(S), Cong bastion, why are 1.5 lakh people coming to his rallies?: Pradeep Bhandari, Founder, Jan Ki Baat, to Nishant Verma pic.twitter.com/CrNy9EjV1t

This clearly means the BJP would end up as the single largest party with a clear edge over the Congress.