Nana Fadnavis – A Man Who Defeated The British Twice With His Intelligence and Diplomacy, Prompting Them To Call..

The Story Of Jagabandhu Vidyadhar..

Mahadaji Shinde was a Maratha Statesman and ruler of Gwalior in Northern India. He was the fifth and the youngest son of Ranoji Rao Scindia, the founder of the Scindia dynasty.

Mahadaji was instrumental in resurrecting Maratha power in North India after the Third Battle of Panipat in 1761, and rose to become a trusted lieutenant of the Peshwa, leader of the Maratha Empire. Along with Madhavrao I and Nana Fadnavis, he was one of the three pillars of Maratha Resurrection. During his reign, Gwalior became the leading state in the Maratha Empire and one of the foremost military powers in India. After accompanying Shah Alam II in 1771 to Delhi, he restored the Mughals in Delhi and became the Vakil-ul-Mutlaq (Regent of the Empire)’.

He annihilated the power of Jats of Mathura and during 1772-73 he destroyed the power of Pashtun Rohillas in Rohilkhand and captured Najibabad. His role during the First Anglo-Maratha War was greatest from the Maratha side since he humbled the British in Central India, single handed, which resulted in the Treaty of Salbai in 1782, where he mediated between the Peshwa and the British. In 1787 Mahadji attempted to invade Rajputana but he was repulsed by the Rajput armies at Lalsot. In 1790 he defeated the Rajput kingdoms of Jodhpur and Jaipur in the Battles of Patan and Merta.

The English in their conquest of India faced resistance from the Marathas, The Sikhs, the Jats and the Gorkhas in the 19th century.These were rare successes of Asians over the European colonial power.

The battles of Chillianwala (Sikhs), first Kalinga war (Gorkhas), battle of Bharatpur (Jats) were rare instances when the Indians had the better of the English.

The Battle of Wadgaon was fought on January 13/14, 1779 by the Marathas was the most comprehensive Indian victory. It was a classic battle where Maratha General Mahadji Shinde lured the English up the Khandala ghats.

Once in a country suitable for cavalry operations, the Marathas horsemen harassed the English from all sides, attacked their supply base in Khopoli and followed a scorched earth policy. Captain Belasis writing about the events at Talegaon in his diary mentions that the constantly hovering Maratha horsemen with their shining swords glinting even at night gave him nightmares.

On January 13/14, the demoralised English began the retreat at night from Talegaon. But alert Marathas launched a fierce attack and the English ran to the safety of Wadgaon village. Here, surrounded from all sides and starved of water and food, the English finally surrendered to Mahadji Shinde, the Maratha general. It was a defeat never suffered by the British in India.

Unfortunately, the Marathas, in a spirit of chivalry, let the English off the hook and permitted them to retreat to Bombay to fight another day. The Battle of Wadgaon was an ‘Indian’ victory. The Maratha army that defeated the English had Narhona, a Goan, in the artillery, Rajputs and Sikh soldiers in the Shinde cavalry. The light troops were Mahars.

Towards the early 20th century, as there appeared the first stirrings of resistance in Maharashtra, the colonial rulers saw the symbolic value of Wadgaon as a rallying point for Maratha pride and Indian nationalism. Lieutenant Stewart, who commanded the advance guard of the English, was killed by the Marathas in the first week of January while on a reconnaissance mission near Karla. The British made him a ‘hero’ of the Battle of Wadgaon though the actual battle took place nearly a fortnight after his death. History books in Maharashtra talked of the brave ‘Ishtur Fakda’ (Brave Stewart) and his (non-existent) heroics. A grave in Wadgaon was identified as that of Stewart and an annual fair was begun in his honour.

There is enough evidence about the ‘mythical’ nature of the legend of Stewart or ‘Ishtur Fakda’. Even a blatantly pro-English account of the Indian Army like one by Philip Mason (A Matter of Honour: An account of the Indian Army, its officers and men, Penguin, 1976, page 127) does not find any mention of Stewart in the context of the Battle of Wadgaon. Nor does A J Fortescue mention him in his authoritative work A History of the British Army Vol III, Macmillan & Co, London 1902.

On the other hand, James Douglas writing in Bombay & Western India Vol II (Marston & Co, London, 1893, page 445) says that if the Marathas would have been as ruthless as Napoleon, ‘Not one man would have escaped from Wadgaon and the history of the East would have changed.’ Again no mention of the ‘braveheart’ Stewart.

The memory of the shameful English defeat was cleverly obliterated and replaced by the myth of a brave Englishman who single handedly fought against hordes of natives. It needs no repetition to say that ‘colonial historiography’ was a major propaganda weapon in the hands of the British to brainwash Indians and make them accept the superiority of the English race.

This happened because after Independence the discipline of history was completely taken over by the Marxists who only concentrated on economic interpretation, to the neglect of everything else.

Till recently there was no monument to the Maratha victory or the great Maratha General Mahadji Shinde. About seventeen years ago, a group of historians and public spirited citizens from Pune came together and erected a ‘Deepmala’ (the typical Maharashtrian tower found in many temples) to honour the victorious Marathas.

Such has been the power of colonial brainwashing that the Dalits, even in the 21st century, would rather remember Bhima Koregaon, but not Wadgaon or a Dalit hero like Umaji Naik who rebelled against the English in the 1830s.

After the British defeat, Hastings through Murre proposed a new treaty, known as the Treaty of Salbai, between the Peshwa and the British that would recognize Sawai Madhavrao as the Peshwa and grant Raghunath Rao a pension. The treaty also returned to Shinde all his territories west of the Yamuna and so was made to withdraw to Ujjain. A resident, Mr. David Anderson (1750-1825), of St. Germains(who had negotiated the treaty) was at the same time appointed to Mahadji’s court.

After the Battle of Lakheri, Mahadji was now at the zenith of his power, when he died, at his camp at Wanavdi near Pune on 12 February 1794. He left no heir, and was succeeded by Daulat Rao Scindia.

Keeney, the English biographer of Mahadaji Shinde, has described Mahadaji as the greatest man in South Asia in the 18th century. Mahadaji Shinde’s role was instrumental in establishing Maratha supremacy over North India.

Shinde Chhatri, located in Wanawadi, in Pune is a memorial dedicated to Mahadji Shinde. It is a hall that marks the spot of Mahadji Shinde’s cremation on 12 February 1794. The three storied memorial in Rajput architectural style, is one of the most significant landmarks in the city 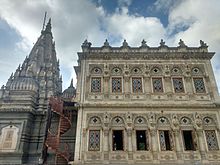 What was the biggest insult faced by former Prime Minister Nehru from an army officer? Samanta Chandrashekhar- He Was A Great Naked Eye Astronomer Of India! He Deserves To Be Celebrated As The Last Light Bearer Of Traditional Indian Astronomy. This young girl would have lost the chance to participate in international level shooting! But here’s how CM Yogi supported her dream