His jaws were broken, bones crushed, nails pulled out before hanging by British, He was the leader of Congress..

What would India have looked like today, if the British never colonised us?

His jaws were broken, bones..

What would India have looked..

Indian soldiers were 120 in number but the Chinese had 6000 soldiers. The ‘Ahir’ Company of the 13th Kumaon battalion, led by Shaitan Singh, held this crucial position at Rezang La.

Rezang La is a mountain pass on the south-eastern approach to Chushul Valley in Ladakh in the state of Jammu and Kashmir in India. It is 3,000 yards long and 2,000 yards wide, with an average height of 16,000 feet.

If Ladakh is a part of India today, it is because of the Veer “Ahirs” who fought to the ‘last man, last round’ at Rezang La (Chushul) on November 18, 1962. This battle is listed in the 8 stories of collective bravery published by the UNESCO (United Nations Educational, Scientific and Cultural Organization).

India lost the 1962 war because of the carelessness of the then Prime Minister Nehru but our soldiers gave us many reason for not bowing down our head. Rezang la battle is one among them.

The Chushul airfield was very important for India to hold on to in Ladakh and this responsibility was handed over to Major Shaitan Singh of 13 Kumaon.

The attack started at 3:30 in the morning by the People’s Liberation Army (PLA) which numbered around 5000-6000 in Chusul. The worst part was that a crest of the ridge prevented Indian artillery from providing support. So the Indian soldiers had to fight on themselves.

Last man, Last round, Last breath: The bravery which should never be forgotten

Looking at the huge strength of the Chinese Army, the only feasible option was to retreat. But it is Indian Army and the troop was led by Major Shaitan Singh; embracing defeat without trying was not in Major Shaitan’s dictionary. So without even thinking of returning back like cowards, he decided to unleash the devil within. Major Shaitan Singh and his men fought till last man, last round, last breath.

While moving among the posts, Major Shaitan Singh was seriously wounded by a sniping Chinese MMG, but he continued to fight along with his men. While he was being evacuated by two of his comrades, the Chinese brought heavy machine gun fire on them. Singh sensed danger to their lives and ordered them to leave him. They placed him behind a boulder on the slopes of a hill, where he was martyred, still gripping his weapon.

Major Shaitan Singh’s company had 120 soldiers but only 6 survived at the end of the battle. But you will get goose bumps to hear that they had killed 1300 Chinese soldiers. Yes, that is the Indian Army for you.

The 6 who survived were taken as Prisoners of war (POW) by Chinese but these brave men escaped from their captivity. 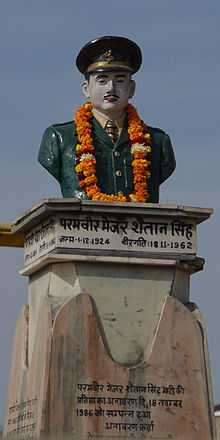 Major Shaitan Singh was posthumously awarded Param Vir Chakra (PVC) for displaying exceptional courage. Anyone would have surrendered but Indian Army teaches not to accept defeat. The company was also awarded with five Vir Chakras and four Sena medals.

Honorary Captain Ramchander Yadav who was one among the six survivors said that the Chinese were very aggressive but the Indians had driven them back twice but they again attacked. When the ammunition of the Indian Army came to an end, they fought with empty hands.

Yadav also mentions about Naik Ram Singh, a wrestler who single handedly killed dozens of Chinese but his bravery came to an end when he was shot on head. Yadav after escaping from the captivity of the Chinese reached the headquarters on November 19 and was taken to Army hospital in Jammu on November 22. The Chinese announced a unilateral ceasefire on 21 November 1962.

These brave Jawans were from the Ahirwal region of South Haryana’s Gurgaon, Rewari, Narnaul and Mahendragarh districts. Today if India is a part of Ladakh then it is only due to these soldiers.

HOW CAN A MAN DIE BETTER,

FOR THE ASHES OF HIS FATHERS,

AND TEMPLES OF HIS GODS.