Why did US President Donald..

In a massive news break, the TimesNow yesterday broke the Ayodhya secret which has been hidden for over 25 years. Yogendra Narayan, Ex-IAS who had been the chief secretary in the Uttar Pradesh government, Defense Secretary in Central Government made scathing revelations about the Ram Jnama Bhoomi which has set triggers in the political circles.

Yogendra Narayan who was serving as the chief secretary in the Uttar Pradesh during the Kalyan Singh government revealed that just 10-15 days before the Babri Masjid was demolished, the then Prime Minister of India P V Narasimha Rao called for a meeting with Kalyan Singh on the issue of Ayodhya which was at its peak then. He disclosed that Kalyan Singh went to meet PV Narasimha Rao at his residence and Yogendra Narayan was asked to wait in the car as the meeting was confidential. The meeting was held for over 45 minutes to 1 hour after which Kalyan Singh arrived at the car and while he was sitting, he said that the PM informed him about the report submitted by the Archaeological Survey of India (ASI) that they had found remnants of a temple below the Babri Masjid which belonged to 15th century and the walls of the Babri Masjid were also constructed using the temple pillars.

Yogendra Narayan said that Kalyan Singh and himself were shocked to hear the reports from the PM himself. Mr Narayan had asked Kalyan Singh what had he decided to do about this, then Kalyan Singh had said he will hold a discussion with relevant people and will decide on next steps.

But this is not the shocking part as the report on Ram temple by ASI was not newly submitted during PV Narasimha Rao government but the report existed since the period of Indira Gandhi. The Archaeological Survey of India had conducted research in Ayodhya many years back during Indira Gandhi’s regime and every Prime Minister after her knew that the Babri Masjid was built by demolishing the Hindu temple. The pillars used for the Babri Masjid all belonged to the Ram Temple which existed in the 15th century. But for nearly 40 years, the entire issues was suppressed by the Congress politicians and paved way for communal clashes which killed hundreds of people.

In 1990, when the VHP Karsevaks were marching toward the Ayodhya, the central government could have intervened and prevented the huge massacre of Karsevaks who were shot on orders of Mulayam Singh Yadav. Since 3 decades, the Hindu stakeholders in Ayodhya were demanding that a survey is conducted by ASI to clarify whether there existed a temple or not. But even then, the Congress remained mute about the ASI report and allowed the situation to aggravate. No efforts were made by the government to control the situation but both Congress and SP used it to please Muslim vote banks and got back to power after 1992 Babri Masjid demolition.

According to few Congress insiders, PV Narasimha Rao was also in favour of building a Ram Mandir in Ayodhya and wanted to disclose the ASI report which would have put a break to all issues, but he was stopped by the powerful voices in the Congress.

This was a typical divide and rule method followed by Congress to get into the power corridors and blamed the BJP for the violence. Later fake stakeholders were created for Muslims who started a new narrative of land issue in Ayodhya claiming that the land was given to Muslims 2 centuries back by Mughal Kings and they were the heir to the Ayodhya property. This same issue has been rotting in Supreme Court since 3 decades and this is exactly why Subramanian Swamy along with many others are trying to put a full stop to the issue.

The Ram Mandir issue must be resolved at the earliest and the ASI report that PV Narasimha Rao spoke about in 1991 should be disclosed and presented in the court. The more the issue is dragged, surely Congress and other pseudo secular parties will not mind creating another episode of blood shed for their political games and destroy the Ayodhya forever.

See the picture taken by ASI 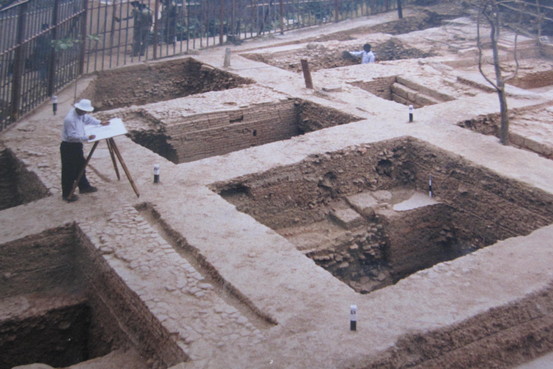