Rafale deal is a ‘good..

Just few months back, the Modi government had hiked the MSP for farmers in order to support and encourage farmers in Agriculture and prevent them from undergoing loss. Now, again the government has increased MSP for Rabi crops massively which will boost farmers income many times.

The cabinet yesterday approved a massive increase of 6% hike in Rabi crops for the year 2018-19, increasing the MSP for wheat to Rs 1,840 per quintal compare to Rs 1,735 per quintal in the 2017-18 crop year. This will gain the farmers an additional income of Rs 62,635 crore helping them overcome low sales and crop loss. The Cabinet Committee on Economic Affairs (CCEA) headed by Prime Minister Narendra Modi approved higher minimum support price (MSP) for winter-sown or Rabi crops. Singh said the MSP for all Rabi crops is higher than the cost of production ranging from 50-112 percent.

The government informed that all the prices have been increased according to the demands and recommendations put forth by the CACP (Commission for Agricultural Costs and Prices), which is the farm advisory body.

The move comes just months after the government increased the MSP for Kharif crops which has boosted farmers income. The government has indeed fulfilled its promise of giving farmers 50 percent more price than their cost of production.

PM Modi who has always been stressing on increasing the farmers income double by 2020, is making all the right moves to boost agriculture and farming activities. It is matter of great concern that many farmers had given up farming due to droughts and other natural calamities which had caused severe loss. However the various schemes of Modi government like crop insurance, soil health cards, river linking and increase in MSP has helped the farmers of the country in every way possible.

Here is the list of crops to which MSP has been increased. 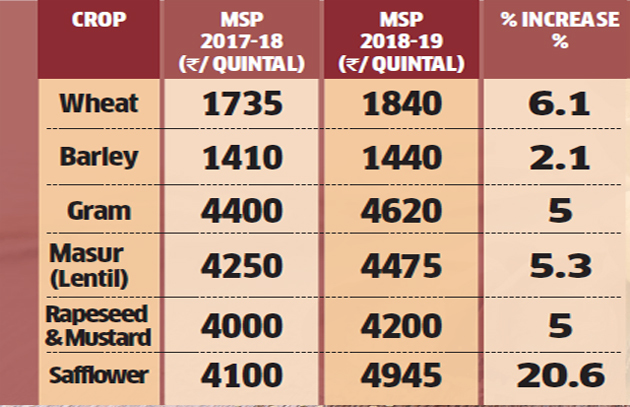