Who is Nambi Narayanan, who..

Since few days there has been allegation and counter allegations with BJP and Congress which has revealed that the Finance Ministry, RBI and then top leadership of Congress had shown special interest to protect Vijay Mallya. It has now been revealed that the then Prime Minister Manmohan Singh had received a specific ‘Thank You’ note from Vijaya Mallya for extending favour to him.

Following the development, the CBI has now decided to probe the complete trails of links from Finance Ministry to Vijay Mallya. Economic Times reported that the CBI has already officially approached the finance ministry and formally obtained relevant documentation to build its case. These files, sources said, are currently being scrutinized for further interrogation of officials.

The initial reports suggested that there were key Mail conversations which has shown that many top officials in the FM had direct links with Vijay Mallya and they worked favouring the fraudster on orders of top leadership in Congress. It is found that most of the conversation was between Vijay Mallya’s company advisors and finance ministry officials. The CBI is also probing then Joint Secretary Amithab Verma who is said to have had links with Mallya. 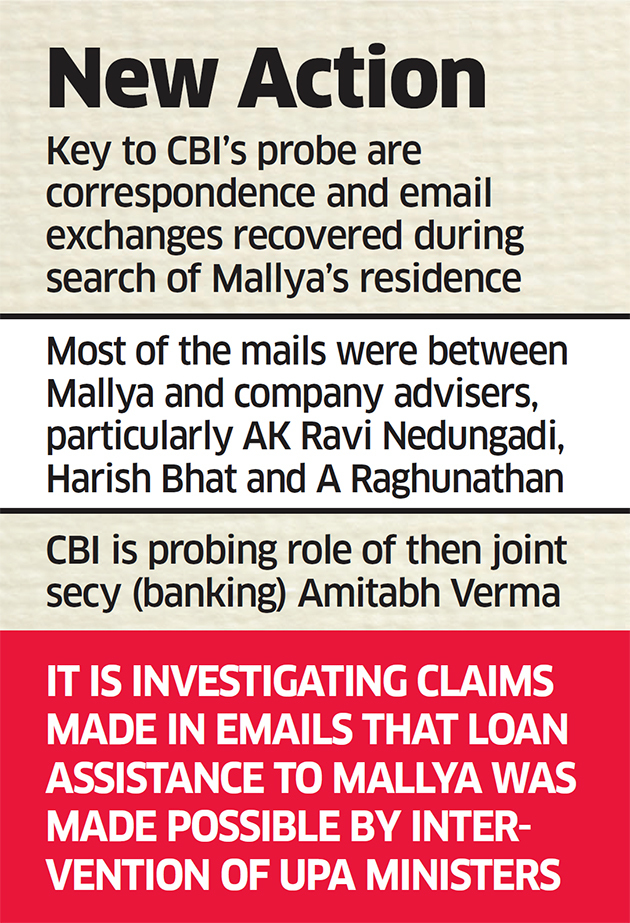 The CBI has apparently seized more than a lakh internal email exchanges that cover the period between 2008 and 2013. These, according to an insider, also document communications with PMO, finance ministry, civil aviation ministry and petroleum ministry among others. The focus was largely on bank loans and supply of aircraft turbine fuel on credit. Economic Times

One of the most crucial evidence that happens to have seized by CBI is that of Mallya’s email to Ravi Nedungadi on March 26, 2009 regarding a disbursement of Rs 500 crore from State Bank of India.

The letter written by Mallya mentions that he was contacted by the Joint Secretary Amithab Verma. “Amitabh called me to ask how the SBI meeting went, I gave him a detailed report and emphasised the urgency and criticality of getting an adhoc disbursement of Rs 500 crore by March 31. Amitabh said he had spoken to Mr Bhat and that this disbursement would happen.”

According to this letter, the SBI did sanction this credit of Rs 500 crore by April which was updated in the SBI’s annual appraisal report as part of Kingfisher’s Rs 2,000-crore credit requirements. This assistance by SBI was apparently extended on orders of top ministers in the UPA government. According to CBI, the banks Punjab National Bank, Oriental Bank of Commerce, Canara Bank, Indian Bank, Indian Overseas Bank and Syndicate Bank were the prominent ones which granted loans to Mallya without due diligence compelling to the pressure by Congress ministers.

It is only time that soon all the names of the Finance Ministry officials and UPA ministers who helped Mallya will be out.

India Vs Terrorists! 5 terrorists killed in encounter with security forces in J&K's Kulgam