Joining hands with China, PM Modi checkmates Pakistan! History is created as China joins hand with India for a..

As elections approach, it is common for every political party to release their manifestos to show the people about their plan for development of the state and the country. But these days the manifesto has tuned out to be a joke to fool people and make them believe that they will do magics in 5 years.

Congress manifesto which was released yesterday by Rahul Gandhi is one such magic book which is probably returned by a magician himself. Rahul Gandhi who is well known to be called Buddu, Pappu has proved that he has approved this manifesto without checking any facts and figures just for the sake of appeasement politics.The manifesto looks like a book made for Muslims and minority appeasement.

But the biggest blunder they have made here is claiming to increase the contribution of IT sector to $ 300 Billion. When the Karnataka’s total GDP itself is $ 190 Billion, how can IT sector contribute $ 300 Billion??? Only a person with no common sense can claim so. 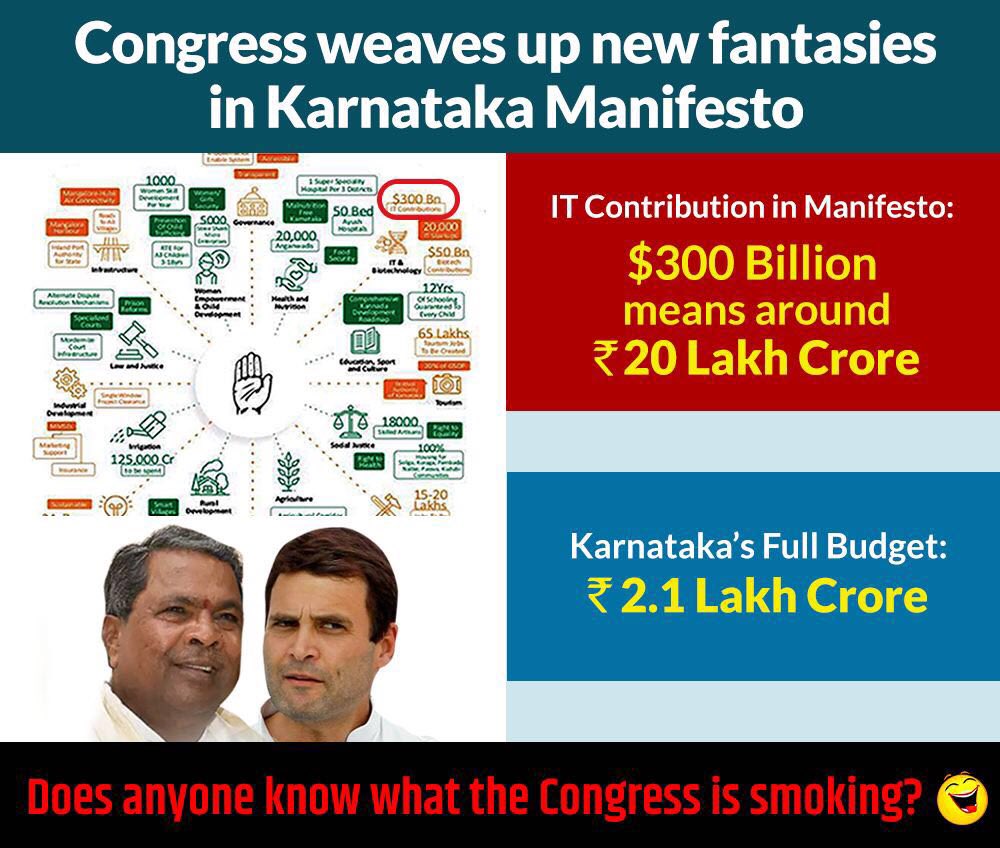 2. Congress claims to make Biotech Industry reach $ 50 Billion in the next 5 years. This is the most stupid fake data that ca be produced because the entire Biotech industry of India itself is worth $ 7 Billion in 2015. And it increased to 11.5 Billion USD in 2017.

But the Congress has made a blunder claiming that Karnataka’s Biotech industry itself is worth 7 Billion USD which is totally fake. So, it is practically impossible for them to increase the Biotech sector to 50 Billion USD in 5 years in Karnataka alone.

3. The other important thing to be noted in manifesto is MINORITY APPEASEMENT!

The Congress claims to provide financial support to 1.25 crores of Minority children. But according to the state government’s data, the whole of Karnataka’s population is 6.8 crore and the population of Muslims is 12% in Karnataka which is around 75-76 Lakhs approximately. But on what basis did the Congress claim that it will provide financial assistance to 1.25 crore people?? Or do they plan to include illegal Bangladeshis, Terrorists Rohingyas in their welfare schemes?

The Congress also claims to provide insurance scheme to cover the health and education of Children of Taxi and auto drivers belonging to minority community. The question is why only minority section and not to all? If this is not called appeasement then what is?!

The Congress also claims to build 1000 MAULANA school to help 60,000 minority students. This more so looks like an attempt to Islamise the education using Madrasa. Hostels and residential schools only for minority and why not others who constitute majority of the population?!

4. The Congress promises to provide 1 crore jobs in the next 5 years. They claim that 50 lakhs jobs were provided to people in Karnataka. But their lies will be busted by their own minister who had claimed that there were not more than 13.9 lakhs jobs created in 4 years. More over their Chief Minister himself had claimed that they will create 1.80 Lakh jobs by 2020. So it is an open truth that the entire claim in their manifesto is nothing but a big LIE!!! 5. The Congress has also claimed that it has provided jobs for Martyred families. But in reality it can be very well remembered how Lance Nayak Hanumtappa’s wife had to go beg the state government for financial assistance. After she received no help from Siddaramaiah government, Smriti Irani came forward and offered job to his wife. 6. The Congress which has absolutely no achievement to claim, has shown the success of the Pradhan Mantro Ujjawala Yojana (Free Gas Scheme) as its own achievement.

They have not even bothered to read the manifesto before publishing making a stupid blunder of including the success of Gas scheme under Skill development.

With such blatant lies, fake claims and blunders, the Congress tries to fool people of Karnataka. This is exactly why we said that either a magician or an idiot would have written this manifesto which has no basis nor logic.

Only thing that can be said is Rahul Gandhi has lived up to his name Buddu!