Why all of a sudden Indians are asking Rahul Gandhi and Sonia Gandhi’s degree certificates? Here’s the hilarious story..

Tripura CM does what Kerala couldn’t do since years! Announces Rs 5 lakh compensation to the family of custodial..

Why all of a sudden..

Tripura CM does what Kerala..

Since Narendra Modi became the Prime Minister of India, he has launched various developmental schemes, which have brought major positive changes in the lives of people. Some of his schemes like Mudra, Rural electrification, Ujjawala Yojana have been a great success with crores of people getting the direct benefit.

In the 2018 budget, the Modi government introduced another ambitious scheme called the National Health Protection Scheme (NHPS), promising to give Rs 5 Lakh per family to 100 Million families or 500 Million (50 crores) people which is one of the biggest health schemes in India. This scheme was initiated with an intention to help the poor families who are unable to afford for treatment. This cover will take care of almost all secondary care and most tertiary care procedures. There is no cap on family size and age in the scheme, ensuring that nobody is left out.

The government has now confirmed that the Modi Care scheme will offer 20% reduction in cost than offered by Central Health Schemes. It will mostly cover treatment like coronary bypass, knee transplant and C-section, Angioplasty which is expensive for people below Middle class. The government has listed all the names of treatment and the rates fixed under the Modi Care Scheme. Take a look at the reduction in cost for some of the heart procedures.

This will give reduction in 20% of cost which will hugely benefit every person in India. The health ministry has finalised the rates for 1,354 packages, which will be covered under NHPS. The packages include 23 specialities such as cardiology, ophthalmology, orthopaedics, urology and oncology, etc, an official said (Times Report).

Indu Bhushan, chief executive of Ayushman Bharat, said CGHS and Rashtriya Swasthya Bima Yojana (RSBY) rates have been used as reference prices for fixing the rates under the scheme. “However, the rates under the new scheme are on an average 15-20% lower than that of CGHS,” Bhushan said. Lower prices mean beneficiaries of the scheme will be able to opt for more number of procedures under the cover if required or can even enrol more family members for treatment. (Times Report). In case of multiple surgeries, the highest package rate will be waived for the first treatment, and 50% and 25% of the package rate will be provided for the second and third treatment. The rest will be borne by the policy holder.

This scheme will be a game changer in the country which is said to help millions of people who suffer without proper treatment. PM Modi has set one of the biggest beneficiary scheme which was not done in past 70 years. Huge appreciation is seen among people towards Modi’s health scheme and people are expressing their happiness for reduction in cost. 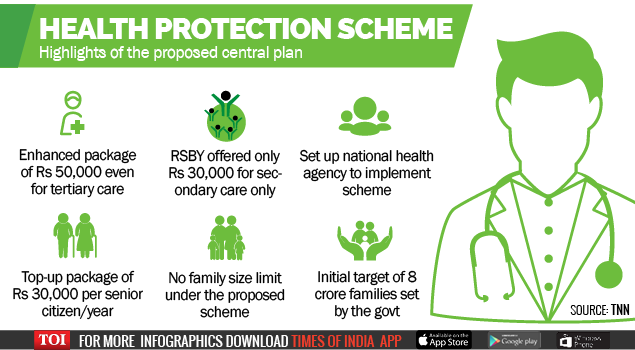