Why did not Hanuman bring Sita back from Lanka himself?

What benefits does Israel get..

Why did not Hanuman bring..

“India does not intend to exploit resources of other countries and we don’t eye on their territories”- PM Narendra Modi said taking a dig at China.

India’s external policies are not purely based on the aspect of profit or loss. We provide equal considerations to human values as well. India does not intend to exploit resources of other countries and we do not intend to grasp other territories. “We do not intend to exploit anyone’s resources, nor are we eyeing anyone’s territory. Our focus has always been on capacity building and resource development,” Modi said, addressing the Persons of Indian Origin (PIO) Parliamentary Conference.

The remarks were made regarding, India’s strong objections to Chinese investments in the disputed Pakistan-administered Kashmir, where Beijing is constructing roads and power projects.

It was the first PIO Parliamentary Conference to be held at the Pravasi Bharatiya Kendra in Chanakyapuri. India celebrates January 9th as the “Pravasi Bharatiya Divas (PBD)” to mark the contribution of overseas persons with Indian origin in building India. A total of 141 officials attended the conference including 124 Members of Parliament and 17 mayors from 23 countries participated in the conference.

Modi in his speech said his government was following the “guiding principle” of “reform to transform” that helped India to move way ahead of the “Jaisa pehle tha vaisa chalta rahega, kuch badlega nahi” attitude.

“Thinking, aims and aspirations of our people are on an all-time high and that is because of the transformation the country is going through. The World Bank, the IMF, Moody’s are looking towards India with a positive vibe.”
He said the government’s aim was to root out corruption and with the implementation of GST; it has removed many tax slabs and brought about transparency in transactions in various business and other trade sections of the country. “Keeping in mind the needs of 21st century, the government is increasing the investment in technology, transportation etc” he added.

Later talking about the conference PM Modi praised the contribution of overseas Indians in influencing the geo-politics of where you live and how you are making policies. “We feel proud. If I talk about politics, I can see that there is a mini world Parliament of Indian origin sitting in front of me. I can imagine how happy your ancestors must be on seeing you all here. 21st Century is being considered the Asian century and India would be a major player and “you shall feel proud about our growth, hence inspiring us to work even harder”. 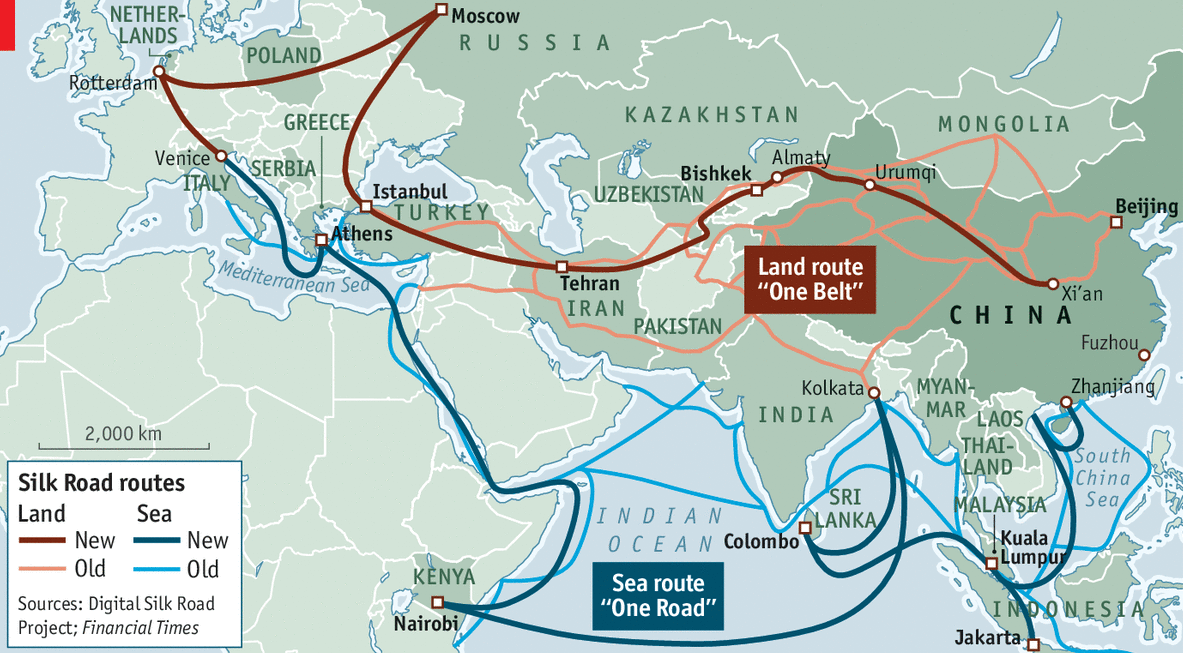 Taking inspiration from the ancient Silk Road trading route “China’s One Belt One Road” initiative (OBOR) hopes to link more than 65 countries, encompassing up to 40% of global GDP. This route links China to Asia, Europe and Africa via an ambitious network of ports, roads, rail and other infrastructure projects. Beginning in China’s Fujian province, the projected Maritime Silk Route passes through the Malacca Strait to the Indian Ocean moving along the Red Sea and the Mediterranean ending in Venice.

The scale and scope of OBOR is huge with at least $1 trillion in investments. China desperate to deflect criticism that OBOR is primarily an instrument for Chinese expansionism. China has managed to convince heads of 29 states and governments to participate in the summit, including Turkish President Recep Tayyip Erdogan, Italian Prime Minister Paolo Gentiloni, Russian President Vladimir Putin and United Nations chief Antonio Guterres. Most western leaders sent its representatives. But failed to convince India and its strategies.

The West views this as a Chinese bilateral project being touted a multilateral venture. The outgoing president of the EU Chamber of Commerce in China complains that the OBOR has “been hijacked by Chinese companies, which have used it as an excuse to evade capital controls, smuggling money out of the country by disguising it as international investments and partnerships.”

The rest of the world is more receptive. Lavishing praise on China for the OBOR initiative while targeting the US, Putin warned at the summit that “protectionism is becoming the new normal,” adding that the “ideas of openness and free trade are increasingly often being rejected by those who until very recently expounded them.”

South Asia also welcomes OBOR and most of India’s neighbours attended. Whereas India refused to participate, maintaining opposition to China’s investment in the China-Pakistan Economic Corridor (CPEC) which passes through Pakistan-occupied Kashmir. India, boycotting the event, announced in an official statement: “No country can accept a project that ignores its core concerns on sovereignty and territorial integrity.” Indian Foreign Secretary S Jaishankar articulated this position at the 2017 Raisina Dialogue: “China is very sensitive about its sovereignty. The economic corridor passes through an illegal territory, an area that we call Pak-occupied Kashmir. You can imagine India’s reaction to the fact that such a project has been initiated without consulting us.” Prime Minister Narendra Modi reinforced this point, asserting that “connectivity in itself cannot override or undermine the sovereignty of other nations.”