The Indus Valley civilization was wiped out 4,350 years ago by a 200 year long drought, this is what all of us believed till date. But as our history surprises us with new innovations and findings each day. Here’s yet another fact revealed by the scientists and interestingly the studies have claimed it to be true.

Scientists at the Indian Institute of Technology (IIT) in Kharagpur have found in a study that the Indus Valley Civilisation was wiped out 4350 years ago due to a 900 year long drought. The earlier theory was that the drought lasted about 200 years but this latest study puts that to rest.

The study will be published in the prestigious Quaternary International Journal by Elsevier this month. The geology and geophysics department at the institute have been studying the monsoon’s variability for the past 5000 years and they found that for 900 long years, the rains played mischief in the northwest Himalayas and dried up the source of the water along which the Civilisation flourished. 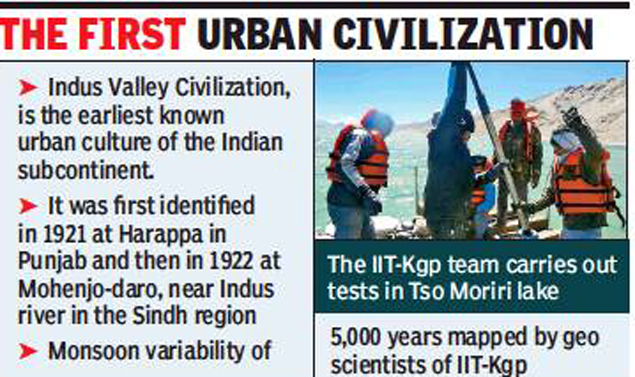 Hence, the inhabitants of the valley had to travel south and east where the conditions were better. “The study revealed that from 2,350 BC (4,350 years ago) till 1,450 BC, the monsoon had a major weakening effect over the zone where the Civilisation flourished.

A drought like situation developed, forcing residents to abandon their settlements in search of greener pastures,” said Anil Kumar Gupta, the lead researcher and a senior faculty of geology at the institute. Gupta added that the people migrated towards eastern and central UP, Bihar and Bengal in the east, MP, south of the Vindhyachal and south Gujarat.

“We have proved that from 2,350 BC (4,350 years ago from today) till 1,450 BC, the monsoon had a major weakening effect over the zone where the Indus Valley civilisation flourished. It was a drought-like situation that forced people to abandon their settlements in search of greener pastures,” said Anil Kumar Gupta, the lead investigator and a senior faculty of geology at IIT.

These displaced people gradually migrated towards the Ganga-Yamuna valley towards eastern and central Uttar Pradesh, Bihar and Bengal in the east and Madhya Pradesh, south of Vindhyachal and south Gujarat in the south.

In Tso Moriri Lake, the scientists worked over a five-metre deep sediment’s geo-chemical parameters, the layers of which revealed the years of good and bad rains. “We analysed the aluminium-calcium and strontium-calcium ratio of the sediment layers. In case of weaker monsoon, the ratio shows an increase while in case of stronger monsoon, the ratio shows a sharp decrease,” Gupta explained.

Every five-millimetre depth of the sediment layer indicated a span of eight to 10 years and a total of 520 samples were studied to go back to an antiquity of 5,000 years, he added.

Kathua Rape victim's lawyer Deepika Singh Rajawat says she can be "raped or killed any moment"... But the shocking facts exposed about her by the Defence counsel will stun you!!! Why Sanatana Dharma is called the ‘Way of life’ and how it is connected to nature?