Mood of India is all set for the upcoming Champion Trophy. For us Indians, Cricket is like a religion. Sachin Tendulkar is still considered the undeniable God of Cricket even three years after his retirement! Leftists might have brainwashed us into celebrating cracker less Diwali, but they can’t stop us from creating an atmosphere of Diwali after every win of Indian Cricket Team. Yes, we Indians are crazy about Cricket and our cricketers! But this year, something has changed!

India is set to play a match with Pakistan on 4th June, 2017. From last five years, India had refused to play matches with Pakistan due to the war-like situation between Pakistan and India at LoC. Why has BCCI agreed to play opposite Pakistan in the Champions Trophy now? Every other day, we are watching the funerals of our soldiers on News Channels with heavy hearts. Leftists like Gurmeher Kaur may profess that these funerals are the effects of war. But we know better! We know that Pakistan is killing our soldiers every other day at border!

Social Media is abuzz with the messages for our soldiers like never before! Our blood boils when the families of our soldiers perform the last rites on the headless bodies of our martyred soldiers. In that mood, we set the photos of our soldiers as a Display Picture on our Social Media accounts. But who wins when there is a confrontation between our love for Soldiers and our craze for Cricket? It’s time to know the truth. Is our patriotic love for soldiers going for a toss for the boundaries and sixes of our cricketers? 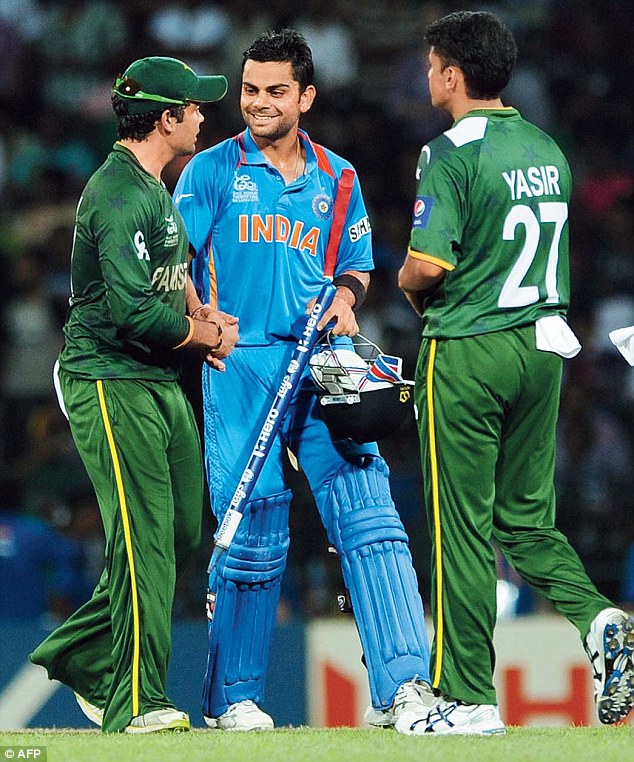 A match between India and Pakistan is hyped as a Mega event on all possible platforms of SM and MSM. The Mainstream Media of the two enemy countries suddenly lose all the hostility towards each other and form a collaboration to grab as much TRP as possible. Huge piles of Sponsors money is at stake at the matches between India and Pakistan. Does BCCI value money over the self-esteem of our nation?

The fact is the ICC Events like Champions Trophy are possible only because of BCCI. For International Cricket Council, Indian Cricket team is the most profitable source. 80% of the ICC revenues are due to the huge Indian audience and the Media Rights for Indian matches. The broadcasting Rights for the Tournaments in which Indian Cricket Team plays is the highest-priced.  The Tournament matches without Indian Team are usually a flop affair. The credit for this niche of Indian Cricket Team is ENTIRELY DUE TO US, INDIANS! The craze of cricket in the highly populated country like India is being capitulated by the Indian Companies by buying maximum sponsorships from ICC. So, the crux of the matter is, ICC needs India and not vice versa!

If BCCI denies playing with Pakistan, it’s Pakistan which will face a bigger loss. As it is, Pakistan Cricket Board is completely beggarly. From last eight years, no international cricket team has gone to Pakistan to play any series. From last five years, Pakistan has suffered a heavy loss due to India’s denial to play with it. We must understand here that, if BCCI refuses to play with Pakistan in Champions Trophy, ICC might levy penalty on BCCI. But BCCI can comfortably afford it as it is the richest of all cricket boards. Can’t BCCI suffer a small inconvenience for respecting the sentiments of 125 Cr Indians?  One more point is that Pakistan might be given the winning points if India refuses to play with it. Nothing can be more insulting to Pakistan than this! In 1996, England and Australia had unhesitently lost the points in World Cup Matches by refusing to play against Srilanka due to the LTTE attack threats.

Virat Kohli is known for his nationalistic attitude on Social Media. But even he seems enthusiastic about playing with Pakistan. During a Press Conference before leaving for England for the tournament, Kohli dodged the question of a journalist in this context. Aren’t our players citizens of India? For that matter, aren’t our artists the citizens of India? How can they reap money by marketing a fake peace between two nations while Pakistan is killing our soldiers at Border everyday and is sponsoring unrest in our Kashmir valley?

Today, BCCI and the whole cricket team needs to take lessons of patriotism from Gautam Gambhir! Last month, he took the responsibility of bearing the education expenses of all the 25 martyred CRPF Jawans in Sukma , Chattisgarh. He even donated all his IPL earnings for the Sukma Martyrs. Indian cricketers are the richest cicketers in the world. And WE Indians who should be given credit for their prosperity. We hero worship them. They capitulate on this fame by earning in crores by giving commercials.

It’s time we Indians realize our united power! If BCCI pushes our cricketers to hug and handshake with the Pakistani Cricketers for the lure of money, we will play spoilsport! We will boycott the match. Let’s see how the Sponsors recover their stake!!