Is ‘Ayodhya’ the main reason..

Can you believe that on..

Every year on Independence Day and Republic Day, the President holds an ‘At Home’ ceremony at the Rashtrapati Bhavan. Most of the MPs, ministers and Padma awardees are invited to the event.

Since the time, Modi became PM, the entire event has turned to be a star studded ceremony than a formal event where most people would want to meet PM Modi. Generally PM Modi breaks protocol and meets everyone from media to Padma awardees to guests in the event. This year while PM Modi was greeting people, he accidentally spotted  Karimul Hak, the man who runs free Ambulance service in West Bengal.

He was recognized by the Modi government for his selfless service and was awarded the Padma Shri in 2017. Yesterday when PM Modi spotted him in the crowd, he immediately recognized him and stopped for a chat with Karimul Haque. Karimul Haque exchanged greeting and wanted a selfie with PM Modi. But Mr Haque appeared to fumble with his phone, at which Prime Minister Modi intervened and asked to do the honours himself. PM Modi himself clicked the selfie for Karimul Haque and had a brief chat with him.

Haque said “I wanted a picture with the Prime Minister, but I’m not very handy with the phone. Prime Minister Modi then took the picture from my phone. After that, without any prompting, he enquired about my ambulance service. He then asked me whether the bridge that I had wanted to be built – to cross from our village to several other interior areas – had been constructed. I had told him last year that the bridge would ease our commute. I told him that we were still waiting for it and he promised that it would be done soon.” 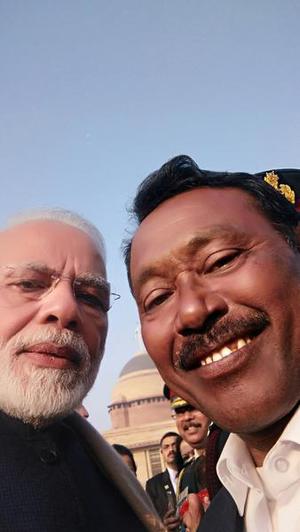 “I am happy that he remembered and I feel that we will get our bridge soon,”  said Haque.

It was definitely a wonderful moment said Haque and all the people who witnessed the gesture of PM Modi.

Hindu youth killed on Republic Day for shouting "Vande Mataram"! Why the mainstream media not naming the killers who shouted "Pakistan Zindabad"?