How did Vijay Mallya agree to repay the loans? What did Modi government do that suddenly made him accept..

How did Vijay Mallya agree..

It is very shameful for the President of one of the oldest political party to spread false information about the nation to defame it. The Congress President Rahul Gandhi in order to target the Modi Government always starts firing his guns without even paying heed to the nitty-gritty of the matter.

Yesterday the Congress President targeted PM Modi based on the survey conducted by the Thomson Reuters Foundation, which said that India is the world’s most dangerous country for women. The Congress President without even investigating and analysing the claims started spreading the venom, that Prime Minister of the country is busy in doing Yoga, whereas the nation in terms of women safety is at the worst level.

While our PM tiptoes around his garden making Yoga videos, India leads Afghanistan, Syria & Saudi Arabia in rape & violence against women. What a shame for our country! https://t.co/Ba8ZiwC0ad

He doesn’t even look at the survey that it is conducted online only on the opinion of 548 experts on women’s issues including aid and development professionals, academics, health workers, policymakers, non-government organisation workers, journalists, and social commentators but not based on the facts and figures.

In response to our query – Reuters says -‘this was a perception poll based on experts’ opinions, not on data.’ So based on ‘perception’…India is declared dangerous and most unsafe nation of women. Any agenda? https://t.co/lg58yAgQjl

He doesn’t even notice that revelation in the survey India leads Afghanistan, Syria and Saudi Arabia in rape and violence against women is itself absurd statement as the countries that have been ranked after India in the survey have women who are not even allowed to speak in public.

Number of people surveyed to rank India the 'most dangerous country for women': 548

Number of Women from Indian Region : 43

Pakistan is not even in Top 5

Fiction in the name of survey is the new tool for propaganda. pic.twitter.com/M7scONrAyH 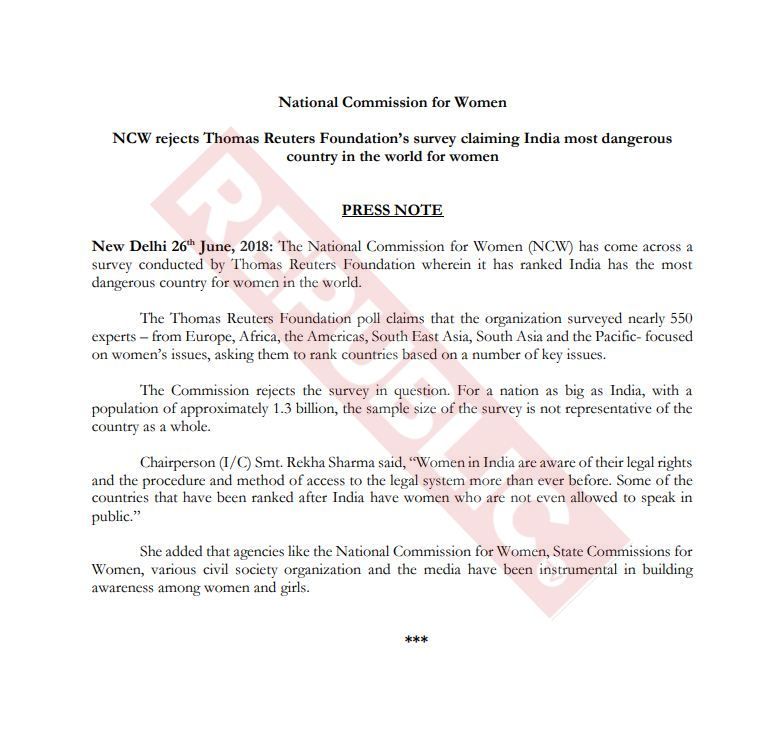 When Oppose Modi campaign turns into an Oppose India campaign, this is bound to happen! After saying “RSS people killed Gandhiji”, this is how Rahul Gandhi pleaded in court to save himself from going to jail! Another surgical strike on Pakistan by Modi Government! India’s budget allocation to defence sector is more than the total budget outlay of Pakistan