In another big boost to India, Modi Government has been successful in tracing the whereabouts of fugitive Nirav Modi.

Minister of State for External Affairs V K Singh told Rajya Sabha that National Central Bureau of Manchester conveyed to Indian agencies that their investigations have led to the location of Nirav Modi in the UK
“In August 2018, the government sent two requests, one from the CBI and the other from the Enforcement Directorate, to the authorities of the UK seeking the extradition of Nirav Modi to India,” he said.

He said the requests are presently under the consideration of the authorities concerned of the UK. In June, the Ministry of External Affairs (MEA) had written to several European countries seeking help in tracing Nirav Modi. 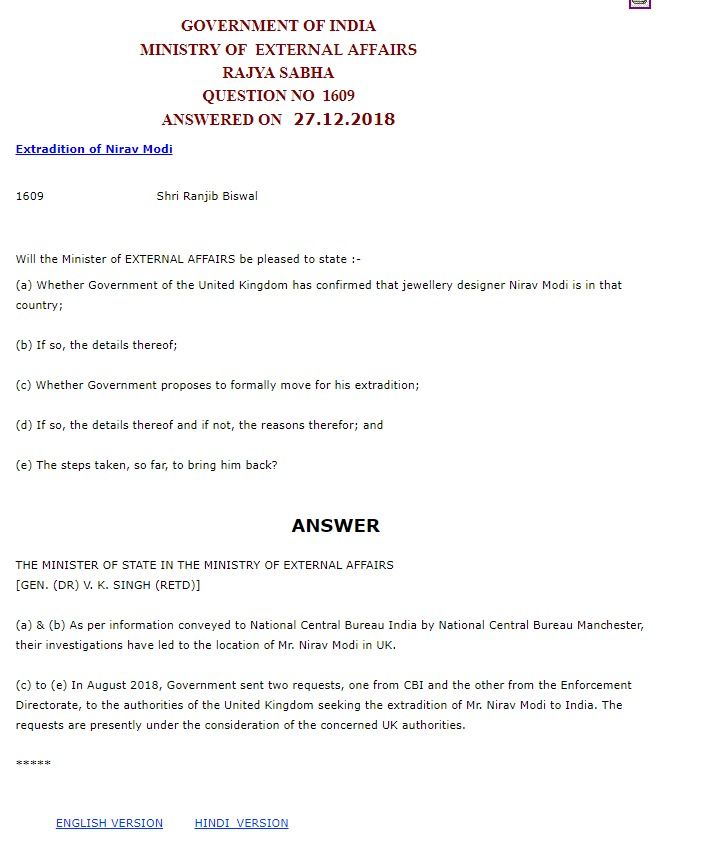 After which the Government has been informed by the British Authorities that he is residing in UK.Nirav Modi is the prime accused in the Rs 13,400 crore PNB scam. He and his uncle Mehul Choksi are being investigated by the agencies for their role in the scam. The scam reportedly began in 2011, was detected in January this year, after which PNB officials reported it to the probe agencies. Two criminal complaints were filed by the ED in this regard after taking cognisance of CBI FIRs.

No corrupts will now be spared. They cannot escape from Modi Government actions. The Modi Government has already extradited Christian Michel, middleman of Augusta Westland scam to India and he is now spilling the beans after which the Gandhi family is in deep trouble. The Government has also received success in Vijay Mallya extradition to India. Very soon he will be brought to India

And the next is of course Nirav Modi and his uncle Mehul Choksi. Already the proceedings are on for Mehul Choksi. Infact few days back he informed to court that under Prevention of Money Laundering Act he is trying to sort the issues with banks and is in complete touch with them for repayment of loans. The government has already revoked Nirav Modi’s passport and also prompted INTERPOL to issue a Red Corner Notice against him and his sister.

ED has already attached Nirav Modi’s properties worth 2.5 billion in Hong Kong and assets worth Rs 58.6 crore in Dubai. The BJP Government in Maharashtra has also ordered demolition of his beach-facing bungalow
PM Modi Government is bringing all the fraudsters who have looted the nation under the rule of Congress back to the motherland to pay for the sins they have committed.

Congress party is such a shameful party that it has committed all corrupt acts and blames PM Modi and his Government for it which is working hard day and night so that the nation can achieve great heights.