Receiving no good response to..

It is a known fact that the petrol price touched the Rs 80 figure mark only because of the inclusion of state government tax, or else it would have been around Rs 50 only. Yes, but none of the opposition parties that are protesting against the Modi government are asking the state governments to reduce their share.

But now what is termed as a historic move, the Rajasthan Chief Minister Vasundhara Raje announced slashing Value Added Tax on Petrol and Diesel by 4%. This pro-people move was announced during a programme as part of her Gaurav Yatra in Rawatsar town in Hanumangarh district and the new prices with the effect from Sunday midnight.

By how many rupees the petrol price would reduce?

Rajasthan Chief Minister Vasundhara Raje said “the VAT on petrol will be reduced from 30% to 26% and on diesel from 22% to 18%. The decision will bring down petrol and diesel prices down by Rs 2.5 per litre but will cost the state exchequer Rs 2000 crore, which will be borne by state government”.

Speaking on the motive of this price slash, Raje said “Our government is people’s government, their voice is god’s voice for us which is why we have reduced VAT on petrol and diesel. The move will provide much needed relief to common man, farmers, traders, students, women etc”.

Slamming the hypocrisy of the Congress party, she added “that the party had failed to play the role of an effective opposition and came out of its shell just before the election. Assembly election in Rajasthan is scheduled for later this year”.

Even the Devendra Fadnavis government in Maharashtra to follow the same path:

Yes, the Maharashtra government led by Devendra Fadnavis said “The state government is working on various proposals to reduce the prices of fuel in the state. The best way to control fuel price is to bring it under GST. If the GST Council moves this proposal, then Maharashtra will support it”.

He also reminded the Indians how the Modi government had reduced the petrol prices 13 times in the first three years by saying “They know that oil prices are dependent on the international markets. This government reduced the price of petrol 13 times in the first three years. Now, international prices of crude oil have skyrocketed”.

Several parties including Congress, Aam Aadmi Party (AAP), JD (S), RJD, CPI (M) have supported the Bharat Bandh today. Their claim is that they are doing this protest so that the Modi government gets pressurized and in turn reduces the price of petrol.

Going by their argument, if the opposition parties are really concerned about the people, then why don’t they reduce the state tax in their ruled states? This question itself exposes the hypocrisy of Congress led opposition.

The AAP had said on September 9th that “The Modi government is heaping miseries on the citizens by its continued failure to check the unprecedented hike in the prices of petrol and diesel and the record fall in the value of the Indian rupee”.

So if the AAP is so concerned about the people then why don’t they reduce the state tax and reduce the petrol price to around Rs 55 to Rs 60.

Let’s have a look at what’s going on in Karnataka:

During the budget that was held couple of months ago, the Congress- JD (S) government had increased the petrol and diesel price by increasing the tax rates. And today both the Congress party and the JD (S) have supported the Bandh. I think no more explanation is required. 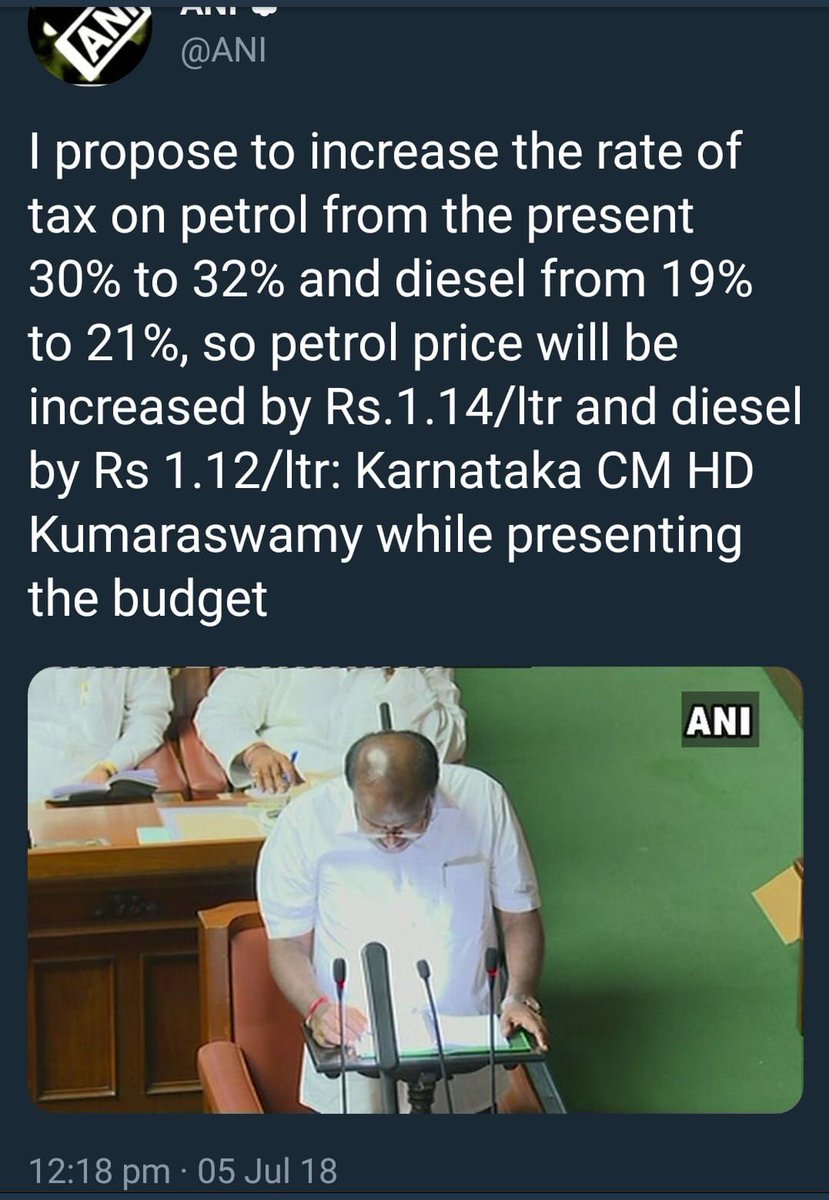 BJP had said Congress party (government) purchased oil bonds of Rs 1.44 lakh crore that we (NDA govt) inherited. Not only this, we also paid Rs 70,000 crore on interest part alone. In total, we (govt) discharged our responsibility by repaying over Rs 2 lakh crore.

Instead of praising this, the Congress party led opposition are misleading the people. But the people of India will give their verdict by dumping the cunning politicians. End of Chidambaram dynasty!!! The junior Chidambaram will be brought face-to-face with Indrani Mukerjea and Peter Mukerjea by CBI How would you compare the top 3 religions: Hinduism, Christianity, and Islam? – Maria Wirth