Why is China praying for..

Just few days back, the internet was flooded with a documentary video released by the Science channel which showed that the Ram Setu which connects Tamil Nadu and Sri Lanka was not natural but man made. The bridge is said to have been existed outside mythological stories and believed to be constructed by man said the report.

Are the ancient Hindu myths of a land bridge connecting India and Sri Lanka true? Scientific analysis suggests they are. #WhatonEarth pic.twitter.com/EKcoGzlEET

The Ram Setu since centuries has been considered a historical place and a matter of religious importance for the Hindus. But however the successive government after independence used the Ram Setu issue to score political milestones and tried to destroy it to appease minority community.

It was the Congress government and its ally DMK, 10 years back came up with a project called the Sethusamudram which was exclusively meant to destroy the Ram Setu. The DMK under the leadership of Karunanidhi (a hard core Hindu hater) got the Central’s approval to built a huge ship yard in the Ram Setu region saying it will shorten the distance for ships. Although there were 5 different routes available, the then Congress government sanctioned the project for Sethusamudram.  Despite many environmentalists saying that the project will destroy the coral reef base of the area and cause irreparable damage, the government went ahead with the project.  But this was nothing but a master plan by Sonia Gandhi and her allies to slowly imprint the colonial rule and destroy the historical evidence of Lord Ram and Ram Setu.

It was in the year 2007, Then late VHP President Ashok Singal requested Dr Subramanian Swamy to stop the Setu Samudram project and save the historical monument of India. Dr Swamy who took up the case requested the Supreme Court in the last hours putting up a strong argument that a National heritage and a monument of religious beliefs should not be demolished.

Dr Swamy recalls that the judge had questioned him whether Dr Swamy goes to Ram Setu everyday to worship Lord Ram, for which Dr Swamy had given a befitting reply saying that “I worship Surya Deva everyday, but I do not go to him”. The judge without further argument had given verdict that the Ram Setu cannot be demolished. The second order came in the year 2008, in which the government withdrew the affidavit calling Ram a Mythological character.

The day when at Last Minute Dr @Swamy39 Saved RAM SETHU from Demolition.

This 1000s year old heritage of ours would have been blasted, except for this order obtained by Dr Swamy. pic.twitter.com/AoO2i7ASGj

Second order after arguments, when Govt withdrew its affidavit saying- Ram is Mythological

Karunanidhi who was heading the DMK was very adamant and hell bent to destroy the Ram Sethu, for which he created a religious divide saying that “Hindus had destroyed the Babri Masjid in Ayodhya and it was time for the Muslims to take revenge by demolishing the Ram Setu.”  What Karunanidhi planned was, even before Dr Swamy approached the Supreme Court if he gets clearance to start the project then he can immediately destroy the Ram Setu after which the Supreme Court can do nothing. So he got dredging machines worth Rs 30 crores to start the work. But it is said that twice the dredging machine which were suppose to clear the Ram Setu were broken in the sea and many people backed off from the project considering bad omen.  By then the Supreme court order was given not to destroy the Ram Setu which saved the bridge from demolition. 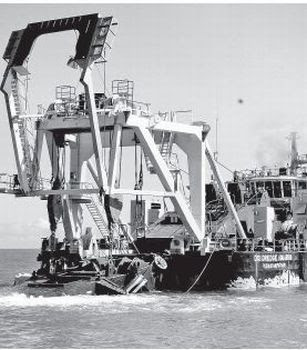 After the Modi government came to power in 2014, Dr Swamy made sure that the central government in no way will touch the Ram Setu in future nor start any projects which will jeopardize the heritage site, for which the cabinet approved the decision and Dr Swamy demanded the scrapping of SetuSamudram project. He also requested the Supreme Court to direct the centre “to follow any other alternative route or alignment without affecting or destroying or demolishing the historic and sacred place Rama Setu.”

The center has now agreed to submit the decision that Ram setu will not be touched and that it will be declared as a National Heritage. It is the sole effort of Dr Swamy which saved the heritage site of Lord Ram which otherwise would have been destroyed 10 years back for appeasement politics.

After the Science Channel showed the proof of Ram setu being man made, the Congress shamelessly argues they never said Ram did not exist. But it was their government which had filed affidavit that Ram was just a mythological character and had no evidence to prove his existence.