See how Congress granted loans to crony Industrialists, had all the fun and then Questioned PM Modi when he..

Get to know how PM..

Abusing the Indian army has become a routine habit for few political leaders since 2-3 months. Time and again political parties like Congress, National Conference and left have abused the soldiers and the Indian army. Although speaking against Army only happened behind closed doors before, recently most of these parties have started to abuse, insult army in open.

It all started when the Indian army started to take tough actions against the separatists and terrorists in the valley. It is well known fact that the biggest beneficiaries of violence in Kashmir is none other than Congress and NC. The article 370 of Jammu and Kashmir, gives autonomous power and special provisions to the state which allows only a permanent resident to buy land in the state and citizens from other Indian states face some restrictions. This particular clause has literally closed the doors of Kashmir to the rest of India. The political parties have completely miused this provision by giving importance to separatists and their narrative of Azadi which has made the state deprive from all developments. They have made people of Kashmir believe that their duty was only to demand Azadi from India. The two parties, Congress and NC have built their political career on these lines.

In past 30 years, the separatists movement and the influence of Pakistan terrorists on Kashmir increased several folds. The attack on CRPF jawans, blocking elections, burning schools in the valley and obstructing anti terror operations of the army consistently increased in the years. This situation gave a chance to the GoI and the Army to strike them back hard and rein in the anti National forces in the valley.

The recent raids by NIA on separatists was a massive blow to the anti national forces as the NIA seized numerous documents which showed direct links with separatists and terrorists organization. Crores of illegal money was recovered which was being used to fund stone pelters to create unrest in the valley. This tied the hands of the political parties who are also the beneficiaries of the Pak sponsored terrorism.

The information in separatists houses have given enormous proof to NIA by which the separatists can be arrested any moment for anti National activities. If that happens, the entire Azadi narrative will collapse and the pseudo secular parties will lose the biggest ammunition.

So the Congress leaders abusing Indian army is a part of bigger strategy to gain international media attention and prevent the GoI from taking further action against separatist leaders. Their plan is to individually attack the army chief and not the entire Institution of the army as attacking any Indian institution will be violation of Indian constitution. So they have picked individuals whom they can target in the name of Freedom of Speech.

Earlier they targeted Captain Leetul Gogoi who tied a stone pelter to the jeep to prevent attack on the army jeeps. Now, their target is Army Chief Bipin Rawat. Congress leaders Mani Shankar Iyer meet with separatist leaders was a planned strategy to send a message to Azadi gang that Congress still stands with them. Now, Sandeep Dikshit calling the Indian Army Chief a Street goonda, is nothing but a means to escalate the fight against Army and attract media attention.

Immediately after Sandeep Dikshit gave statement against Army chief, the Pakistan media has picked up the matter and is openly supporting the Congress leaders. They are using the situation to attract human right activists and encouraging them to speak against Indian establishment. 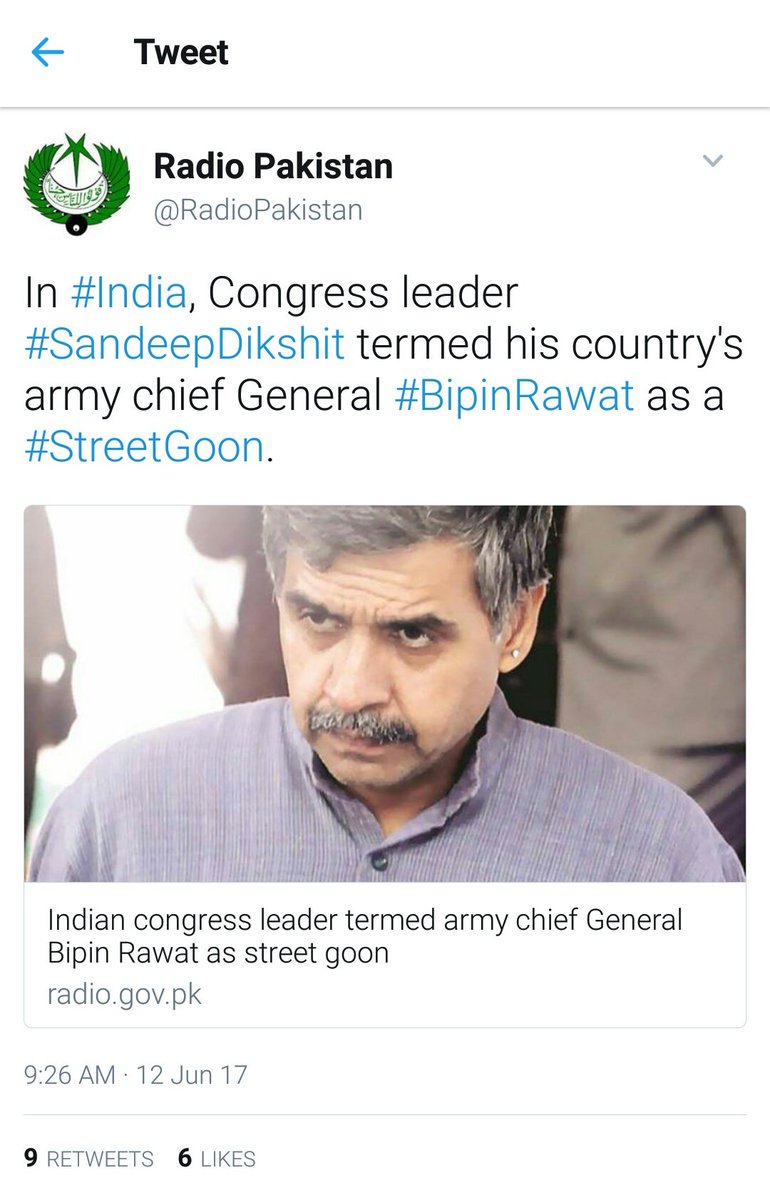 It is well known that in Congress party, no body can utter a word without the approval of Sonia Gandhi. So this whole plan of targeting the army chief is a strategy of the 10 JP and not just an individual opinion. This is exactly why Congress has not taken any action against Sandeep Dikshit nor Sonia or Rahul Gandhi have disapproved his statements.