She ruled Delhi for 15 years but now her son has insulted Indian Army! Here’s the pathetic story of..

JNU student leader and popular Modi hater Shehla Rashid deactivates her Facebook profile after she gets rape threats by..

Ten years back on 13th September 2008, a series of 5 bomb blast took place in Delhi in which 30 people were killed and over 100 were injured. The terror attacks were said to be carried out by the Indian Mujahideen terror organisation. The incident shook the country as the Capital came to a stand still.

Just a week after the terror attack, the Delhi police on inputs of Intelligence Bureau conducted a most daring encounter operation in the Batla house where they killed two dreaded terrorists of the Indian Mujahideen hiding in Jamia Nagar, Delhi. Two terrorists Atif Amin and Mohamed Sajid were killed in the encounter and another two terrorists Mohd Saif and Zeeshan were arrested. But one terrorist had managed to escape from the Batla house encounter and was missing since then. Delhi police Inspector and encounter specialist  Mohan Chand Sharma was martyred during the operation. The brave officer leads the team from the front and was successful in killing two terrorists before he was shot down by one of the terrorists. Along with him, 2 other constables were grievously injured. After 10 long years, the police have been finally able to nab this terrorist, the news was confirmed by the Delhi police special cell today. Arij Khan alias Junaid was arrested from Nepal four days back and brought to Delhi. He was one of the terrorists who had escaped from the Batla house encounter 10 years back and had believed to be fled to Pakistan via Nepal.

The Batla House encounter was one of the most controversial encounters in the history as most of the so-called secular parties shockingly came in support of terrorists. The Congress was the first party which called the encounter fake and tried to protect the terrorists calling them innocents. The incident lead to massive protests by Congress, SP and BSP who along with Human Rights activists blame the police for killing the terrorists. The police officer who laid down his life for the country was blamed for negligence and human rights violations. The political parties demanded judicial inquiry in Parliament after which a probe was conducted by the judiciary. Finally, on 1 May 2009, the Delhi High Court directed the National Human Rights Commission to clear all charges against Mohan Chand Sharma.

Finally, in 2010, the Delhi police filed charge sheet against Shahzad, Ariz Khan, Atif Ameen and Mohammed Sajid, accusing them of killing Inspector Sharma on 19 September 2008. On 15 February 2011, Additional Sessions Judge Ajay Kumar Kuhar framed charges against accused Shahzad Ahmed alias Pappu for the offences of murder (Section 302), attempt to murder (Section 307), section 333 (causing hurt to public servant), 353 (assault to deter a public servant from discharge of his duty), 186 (obstructing public servant in discharge of his public functions) and 201 (causing disappearance of evidence) of the Indian Penal Code, besides section 27 of the Arms Act for his role in the encounter.

Now finally the prime accused Ariz Khan has been arrested, which has come as a major embarrassment for the Congress which for 10 years argued that the encounter was fake. It was Sonia Gandhi who openly spoke in support of these terrorists and blamed the police for conducting encounter. Now, that the terrorist has been nabbed will Sonia Gandhi and Rahul Gandhi apologize to Nation, will they apologize the family of police officer Mohan Sharma who was killed in an encounter? 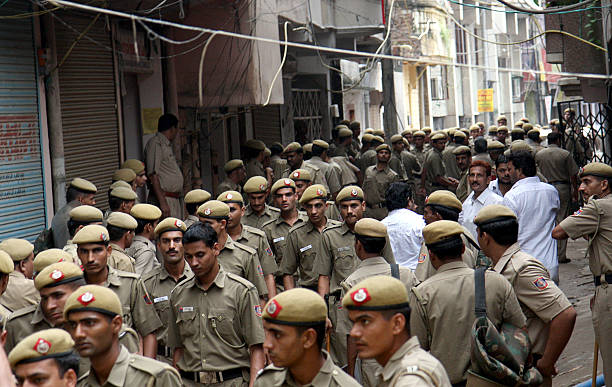 The Congress had then claimed that Sonia Gandhi CRIED BITTERLY when she saw the pictures of Batla house encounter, did she cry for TERRORISTS??? Sonia Gandhi and Rahul Gandhi should feel ashamed of themselves for supporting terrorists. The Congress which backed the dreaded terrorist organisation of IM should come out and tender an open apology to the people of the country and accept that their support to terrorists was to gain votes and appease the minority community before the 2009 elections.

She ruled Delhi for 15 years but now her son has insulted Indian Army! Here's the pathetic story of Congress Watch! C.M Yogi Adityanath says Akbar, Babur & Aurangzeb have nothing to do with the Great Indian History