Modi Milestones!!! How much do..

No inefficiency will be tolerated..

In a shocking verdict given by the Patiala court, all the accused in the 2G scam have been acquitted by the court. This has been really a sad day for all the Indian. This scam had taken place during the Congress led UPA government in 2008. The court said, “Prosecution has failed to prove the case beyond reasonable doubt.”

The court acquitted both A Raja and M Kanimozhi in the 2G scam. This was the biggest scam in India till date and even the “Time Magazine” called it the biggest example of abuse of executive power after US President Richard Nixon’s Watergate scandal. All the other accused in the scam have also been acquitted by court.

Former CBI Director A P Singh, who led the arrests of A Raja and corporates, was shocked after the verdict was announced! He said, “I don’t know what happened in the trial but there were clear irregularities in the allotment of 2G spectrum which we (CBI) pointed out with detailed evidence”.

Here is the timeline of the 2G case!!! 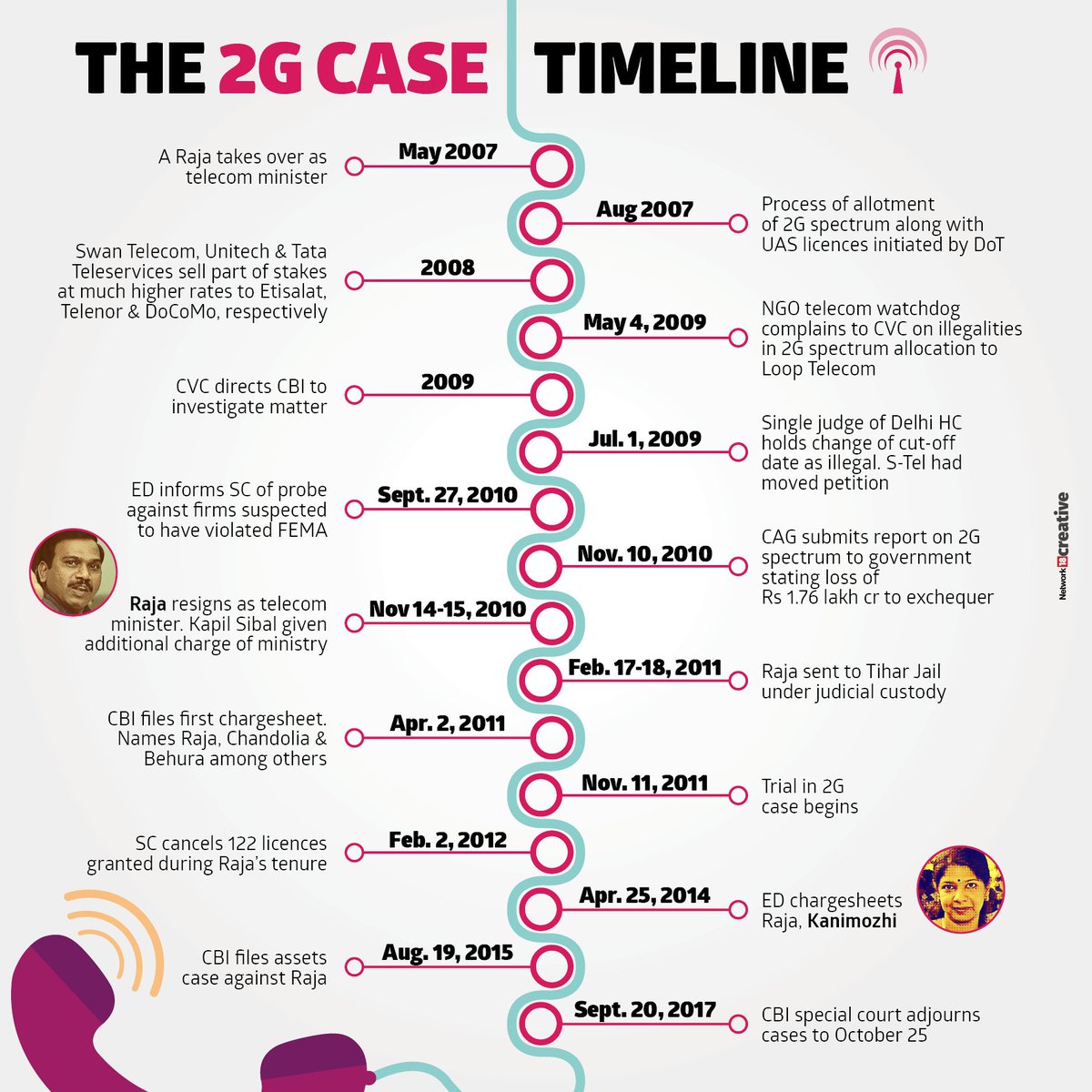 What is 2G Spectrum scam?

The 2G spectrum scam involved politicians and government officials in India illegally undercharging mobile telephony companies for frequency allocation licenses, which they would then use to create 2G subscriptions for cell phones. The shortfall between the money collected and the money which the law mandated to be collected is estimated to be Rs 1,76,645 crore, as valued by the Comptroller and Auditor General of India based on 3G and BWA spectrum auction prices in 2010.

How the then Congress led-UPA government supported the scam?

Kapil Sibal, the then Minister of communications & IT, had exhibited his skills by saying that “zero loss” was caused by distributing 2G licences on first-come-first-served basis.

Sibal’s “zero loss theory” was demolished on August 3, 2012, when as per the directions of the Supreme Court, the Government of India revised the base price for 5 MHz 2G spectrum auction to Rs 14,000 crore, which roughly gives the value of spectrum to be around Rs 2,800 crore per MHz which is close to the CAG’s estimate of Rs 3,350 crore per MHz, reported India Today.

Rishi Bagree said that the verdict is another scam!

“Judiciary biggest corrupt institutions of India.. case running for 8 yrs now say no evidence then why put them on trial . Crores of money made by judge & advocates in 2G Scam Verdict”.

The verdict was condemned across the nation and widespread anger erupted over the acquittal of the accused in the 2G Spectrum Scam!

Former Telecom Minister A. Raja, Rajya Sabha MP Kanimozhi and all other accused have been ACQUITTED in the 2G spectrum case!

The Comptroller and Auditor General (CAG) has estimated a presumptive loss of Rs1.76 trillion because of flawed allocation of spectrum when A. Raja was telecom minister in the UPA government.

Supreme canceled all licenses in 2012. Now, all accused are acquitted in #2GScamVerdict. Is this a Joke? Now, don't expect anything over CWG, Augusta, National Herald scams etc. All these are just for Election speeches.

I am not well aware of Judicial process and system and yes judicary is corrupt from top to bottom BUT i fail to understand How @narendramodi is responsible for #2GScamVerdict ?

Why don't we use RW standard punching bag for this? none other the @arunjaitley

Yesterday when I was teaching law to my students, I told them that acquittal can be seen in two ways.. 1. A person is not guilty
2. The prosecution failed to prove the case against the accused.
Never knew I will get the example so soon. #2GScamVerdict #2Gverdict