But the statement made by the brother of Gauri Lankesh has stunned the Congress brigade and has also put them in huge embarrassment. As the election is approaching in Karnataka, the Congress has decided to ride on the ship named “Gauri Lankesh”.

On January 29th, “Gauri Day” is being celebrated in Townhall, Bengaluru as it is her birth date. But do you know who are going to participate in this event? Jignesh Mewani, Kanhaiya Kumar, Shehla Rashid, Umar Khalid, actor Prakash Raj and Radhika Vemula are some of the individuals who are going to visit.

What did the brother of Gauri Lankesh say? Why has he created a headache to the Congress leaders?

If the ‘Gauri Day” was celebrated with a noble intention, then even her family members would have attended but it didn’t happen. Gauri Lankesh’s brother unmasked the ‘Gauri Day” brigade. He said that the event was sponsored by the CM Siddaramaiah government and it is looked after by the media adviser of CM Siddaramaiah, Mr Dinesh Aminmattu. Due to this, he stepped back from participating in the “Gauri Day” celebration.

CM Siddamaramaih is bearing the flight expenses of Jignesh Mewani and Kanhaiya Kumar!

Yes, Indrajit Lankesh said that not just the event “Gauri Day” is a state sponsored event but even the flight charges is looked up CM Siddaramaiah government. Again, this was revealed by Mr Indrajith Lankesh. He also questioned why the state government is spending thousands of rupees on the people who are visiting from Delhi on a flight?

Do you know why the Congress isn’t nabbing the culprits?

Mr Indrajith Lankesh made a serious allegation that the Congress government, perhaps, wants the keep alive the death issue of Gauri Lankesh. That’s the reason they haven’t yet nabbed the murderers. None from my family will attend the “Gauri Day” which will be conducted in Town Hall, Bangalore, Mr Indrajith Lankesh added.

If this allegation was made by some third party, then we could have ignored saying it was a politically motivated statement. But now we cannot ignore this because these allegations were made by none other than Indrajith Lankesh, brother of senior journalist Gauri Lankesh. 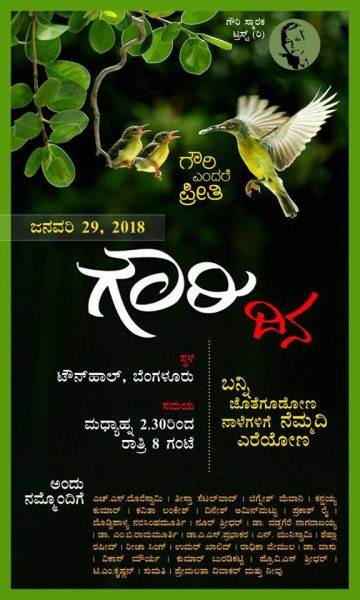 Surprisingly, the mainstream media is silent on the statement made by Gauri’s brother. Soon after the murder, he had also alleged that Naxals could be behind the murder as Gauri Lankesh had some serious scuffles with them.

On January 26th, the deputy chief of the Special Investigation Team (SIT) probing the murder of journalist Gauri Lankesh said that no one has been arrested or detained in the case. “All I want to say is that investigation is on and we are hopeful of solving it soon”, this is what the Karnataka Home Minister Ramalinga Reddy had to say.

Will Gauri Lankesh’s killers be nabbed? A serious question to which expecting an answer may be foolish. Manohar Parrikar slams media for misquoting and twisting his statements on why he left as Defence Minister! The only party in India that oppose the bravery of Indian Armed Force is the Congress party! Here’s who said it